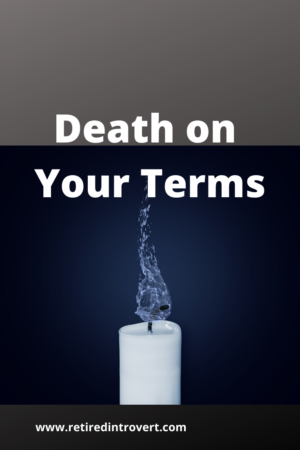 I apologize in advance for a post that many of you might find a little too melancholy. But I hope it makes you think.

I started writing this post months ago and I’ve struggled to determine exactly what I want to say. It’s come to mind a lot lately as it seems death has been far too prevalent this month. I’ve changed the title multiple times, trying to find just the right one to express my feelings. I hope this is finally the right one.

As we went through the end of life issues with Mickey and Brutus, it made me think about this topic. I’m sure I’m not the first one to ask this question but why are we kinder to our pets than we are to each other?

Initially, I thought I was writing about euthanasia, but I’m not sure that’s entirely accurate. Maybe it’s more about assisted suicide. I hadn’t really thought about the differences until I did a little research.

The primary distinction is based on who does it. Euthanasia is sometimes called “mercy killing” because it’s done by someone other than the person who wants to die. Assisted suicide means doing it yourself, with someone else providing the means.

Let me tell you how our experiences with Mickey and Brutus sparked this for me.

We knew Mickey wasn’t well, but we kept thinking he’d get better. We might have been in denial for that last month of his life. He barely ate, he lost weight, and he simply wasn’t his usual self. Mickey was always the quiet one, but he became even more reclusive and slept in new places.

He was miserable on his last day. We bathed him because he had poop all over his tail. He started vomiting. And the final straw was when he collapsed on the floor. Tim thought he had died right then. It was awful.

We rushed him to the pet hospital. They couldn’t even take blood because he was so dehydrated. He only weighed four pounds and his eyes were sunken. While we were deciding what to do, he died on his own. It wasn’t a peaceful death, even though I was able to hold him at the very end.

Things were different with Brutus. We knew he was eating less and losing weight but he still had his usual energy. Brutus was always physically stronger.

We didn’t realize how sick he was until we took him to the vet to find out why he wasn’t eating. We tried a few things but it seemed like they made him feel worse.

One late afternoon, he started making weird noises, was drooling and could only walk a little ways before he would stop and lay down. I was scared. He got a little better but we rushed him to the pet hospital.

We left him overnight so they could do an ultrasound on him. We got the news early the next day, but we’d already decided what we were going to do. There was no way we were going to watch Brutus suffer the way Mickey had.

He was able to spend his last day at home. I’ll never forget how excited he was to see me when I picked him up at the hospital. He got to spend more time with us. He got to lick his last fudge bar stick. He didn’t seem sick at all.

When we took him back to the pet hospital, he laid on the couch between us. He was very calm, almost as if he knew what was coming and he was OK with it. He was given the two injections and simply slipped away. No horrible pain or suffering. At least not what we could tell.

On the hospital paperwork, it said he was getting “humane euthanasia”. For us, Brutus’s death wasn’t any easier than Mickey’s, but at least we knew he wasn’t going to suffer as his kidneys completely failed.

Why don’t we treat humans this same way? Are we only humane to pets? We might rationalize euthanasia with pets by saying we don’t want to spend the money to make “just a pet” better. Regardless of our reasons, we are ultimately treating them better by eliminating their suffering.

There are so many awful diseases and illnesses that take the lives of humans. Many can last for years, and even though we know there is no cure, we must watch as someone we love suffers to the bitter end. It’s painful for everyone.

I don’t know anyone who says they want a long, painful death, do you?

So, what’s the issue?

Euthanasia violates the Hippocratic Oath, the foundation for medical ethics for more than 2,000 years. Assisting a person in ending their life is against everything a doctor stands for. However, there are also doctors making arguments for it in the name of respecting the rights of the patient.

Who decides when someone is no longer going to survive? If we wait until a patient is in so much pain, will that person be able to make a decision? We can designate “no resuscitation” if we don’t want treatment to extend our lives but why can’t we say I’m not really living so help me die?

My brother-in-law’s father died three weeks ago. He hadn’t been well for months, but they wouldn’t take him into hospice care until there was “failure to thrive”. It made me think about what failure to thrive means.

From a medical perspective, failure to thrive (FTT) happens when an older adult has a loss of appetite, eats and drinks less than usual, loses weight, and is less active than normal. He may not be interested in other people or social activities. He may also have memory loss, trouble thinking, and trouble with daily activities.

What if you’re not “older” but have serious medical issues that affect all of those things? Is discontinuing treatment the same as killing yourself? In the long run, yes it is. But it doesn’t always eliminate the long process of dying.

So, what should be allowed?

I know it could be easy to make the decision too soon. What level of pain would make assisted suicide acceptable? People have different pain tolerances. What if someone is simply tired of living with constant pain and a lack of independence and mobility?

At what age might the quality of life be an issue, even without a terminal illness? What if someone is still physically strong but mentally no longer there? Could someone make the decision for him or her?

What if you’d rather have people remember you when you were vital as opposed to the time when you were confined to a hospital, care center, or hospice bed?

You may have heard the story about the young woman with terminal cancer who moved to Oregon simply because she wanted to be able to die on her own terms. She was in complete control and could decide when she was ready. Maybe it was too early by some standards. Maybe her family didn’t agree with her decision. But it was her choice when she thought she was ready.

Is assisted suicide a sign of courage or cowardice?

By the way, today is the one year anniversary of our little Mickey’s death. 💔