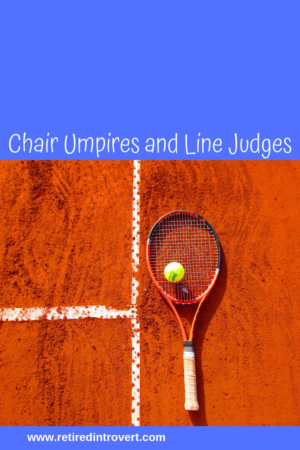 I’ve been to several professional tennis matches over the years in several different locations. It’s a fun experience as you get to see things you can’t see when watching tennis on TV.

One of those things you notice more when watching in person are the tennis officials – chair umpires and line judges. Over time, you begin to recognize them and know their styles. Since they’re such a big part of the tennis game, I thought it would be interesting to learn more about them.

I’m starting with the line judges because before you can become a chair umpire, you need line judging experience. I guess that makes sense. There’s a hierarchy within tennis officials.

Line judges are responsible for monitoring where the ball lands in relation to the lines on the court. If a ball hits anywhere on the line, it’s considered “in”. They also watch for foot faults during the serve.

Not surprising, to be a line judge, your vision must be 20/20, with or without correction. Another thing you notice when watching in person is how fast those balls are really moving. I’m amazed they can see where the balls are landing!!

It also requires a tremendous amount of concentration. You can’t be distracted by anything around you or you could miss a call. And they have to be able to yell in order for their calls to be heard by the players. They also can’t move, even if a ball is coming at them!!

You also need to be able to handle player abuse at times. One famous case was in 2009 when Serena Williams threatened the line judge that called her for a foot fault.

The line judges work in teams and are rotated periodically to allow them time for lunch and breaks. The teams are chosen based on each person’s experience in certain positions. There are nine line judges to a team.

Pay attention sometime when you’re watching tennis. You’ll find they move around a lot, depending on which player is serving.

You also probably don’t realize it, but the same line judges go from tournament to tournament. We noticed one line judge once, I think because he had very blonde hair. And then we started seeing him every year and at different tournaments.

The chair umpires are more visible to the fans since they sit up high in line with the net. They have overall responsibility for keeping the score and for making sure the rules are followed. And it seems the rules are always changing.

For instance, this year they’ve implemented a “serve clock”, which is much like the shot clock in basketball. There are too many players not serving quickly enough and this is supposed to help keep the game moving.

The highest-rated officials in professional tennis, the ones who work the most important tournaments and matches, are called gold badge chair umpires. Officiating tournaments is their primary job and main source of income.  There are three levels of training in order to reach gold badge status.

Chair umpires also have their share of controversy. In the 2018 US Open, there were two incidents involving chair umpires.

First, Mohamed Lahyani (or Big Mo as we came to call him), was suspended for two tournaments because he gave player Nick Kyrgios a pep talk when he didn’t appear to be trying during his match. (He eventually won the match.) Chair umpires are supposed to be objective and impartial, and this behavior was viewed as crossing the line.

Second, Carlos Ramos was involved in a clash with Serena Williams in the women’s final. She was penalized for coaching. And her coach admitted to it. But she took it too far and made it personal. I wrote about it last year.

Also, earlier this week, a gold badge chair umpire was fired after he violated the ATP policy of only giving interviews with permission. (He was the chair umpire for this past summer’s Wimbledon final between Novak Djokovic and Roger Federer.)

According to the ATP, Damian Steiner not only failed to seek permission from tour supervisors before he gave more than a dozen interviews, but he also delved into topics that would have been off-limits, even if the ATP had granted permission.

Steiner has not lost his gold badge status or been expressly barred from working at the Grand Slam tournaments. But he is not part of this year’s umpiring crew at the U.S. Open.

Will technology replace the umpires?

If you’ve watched any tennis, you know there’s technology for identifying when a ball or player has gone over the line. A few years ago, the challenge process was put into place, where a player has opportunities to review a call. Each player is allowed three incorrect challenges per set and is awarded another should the set go to a tiebreak.

With this technology in place, why do we need line judges? Well, others are asking this question as well. The ATP is currently reviewing it.

An electronic line-calling system, called Hawk-Eye Live, was tested at the NextGen ATP Finals in Milan last November. The system sends visual and audio cues to the chair umpire and off-court monitors within a tenth of a second of a ball bouncing.

Taking the human element out of tennis calls would eliminate the drama and players could focus more on tennis and less on the validity of the calls.

Some think it would dehumanize tennis and possibly make it boring, citing the suspense of challenges and getting the crowd involved. I’m not so sure. Yes, there’s fun in trying to guess if the ball was in or out. But I could do without the arguments associated with that human element!!

OK, it’s time for me to concentrate on today’s tennis matches at the US Open. Are you watching? If/when you do, pay attention to the umpires. See what you notice. 🎾🎾🎾