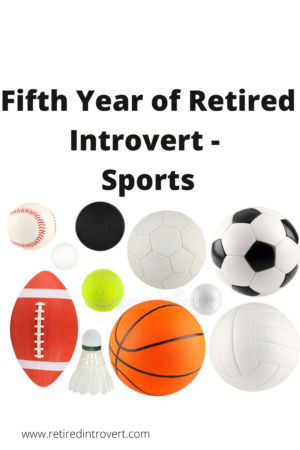 This is the last installment of the Fifth Year series I started last January. This month’s category is Sports. I don’t have a lot of posts in this category, but I have a few you might be interested in.

I’m not a runner myself, but I have supported a couple of long-distance runners over the years. I’ve also been going to the Drake Relays for many years, and we recently went to Eugene, Oregon for the World Championships.

This post discusses what it means to support a long-distance runner.

And one year we had to skip the Drake Relays, which was unusual for me. It was too tough to go when Tim was still working. We thought skipping was just for one year, but with COVID we had to miss 2020, and then it’s just been tougher and tougher to get motivated to buy tickets. I keep thinking about the lousy weather and as I said in my post, it’s just tough to think about sitting outside in the cold and maybe rain all day.

I like basketball a lot. I played a little myself in high school, but I liked it even before that. In the days when the NBA games were televised only on Sundays, my family watched the games. I loved the Boston Celtics. Now, I don’t even care about the NBA but I do love college basketball.

Particularly fun for me is the NCAA tournament. I wrote about that in the post March On! But you’ll find this post is about much more than basketball. I talk about spring, a Florida trip, spring training, and finally basketball.

In Fired Up for Basketball, I talk about my long-term love for basketball. From high school to the NBA, and finally college. I love watching it.

One thing I didn’t like was the style change the players made in the 1990s. Do you remember those long shorts that looked more like skirts? Well, lately I’d noticed basketball shorts were getting short again. And that makes me happy. Looking at shorts today, you’d never know they were ever long. Are Basketball Shorts Getting Short Again?

Tennis is the sport I’ve written about the most. I love watching professional tennis, both in person and on TV.

Tennis Anyone? was my first post about tennis, focused on the Australian Open which is in January every year. Because of the time difference, this is the toughest tournament for me to watch. As much as I’d like to, I just can’t stay up late or get up early to watch.

As with most sports, there’s bound to be controversy. But one year there was a big one. If you read this post, you’ll find out my opinion of Serena Williams.

One of the biggest tournaments in the history of tennis is Wimbledon or The Championships. There are rules around what players must wear, specifically, all white. No exceptions. However, it sounds like there will be a change in 2023. It’s a small change, but women players will be allowed to wear dark undershorts. Evidently, this is to relieve the anxiety of those players having their periods.

So many people I know who aren’t close to tennis have trouble with the scoring system. I will admit, it doesn’t make a lot of sense. But if you ignore that, it’s actually pretty simple. Read about Weird Tennis Scoring.

Finally, I wrote about chair umpires and line judges. But you’ll find changes have been made since COVID.

We’ve long had the technology to make line calls. It’s been used for years when players question a call. It only makes sense to use it for all line calls. Over the last year or so, we’ve seen just that. It has seemed a little weird, and it hasn’t kept players from having questions. But how can you argue with technology?

Well, that’s the end of the recaps during this fifth year of my blog site. I hope you’ve enjoyed the opportunity to look back on some of my early posts. It’s been kind of fun for me to read them again myself.

So, here’s to a Happy 2023 and even more from Retired Introvert. Thanks to all of you for following!!