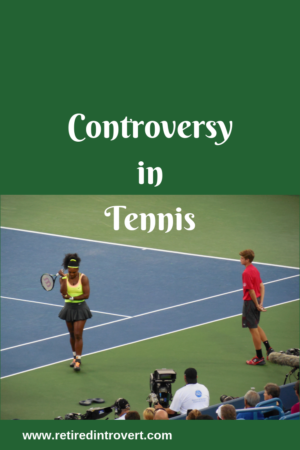 After the last U.S. Open women’s final, a friend asked me what I thought about the controversy surrounding Serena Williams.  I’m going to offer my opinions on the matter, and I hope you’ll remember these are my opinions and not facts.  I may quote some facts, but any commentary is mine alone.

Before I write about the recent issue, let me just get this out on the table.  I am not a Serena fan.  I know many of you might be, even if you don’t follow tennis closely.  She has huge (no pun intended) visibility and is very well known even outside of tennis.

Yes, she and her sister Venus have done much for the sport.  That by itself is since it’s a sport I love.  The more attention it gets, the more coverage I can count on.  And while I love attending tennis matches in person, most of my tennis watching is on TV.

Why am I not a fan?  From the beginning, I’ve sensed that she and Venus have an attitude.  Maybe it comes from their father, who was very hands-on and known for his interference with just about everything.

I think she always has an excuse.  If she doesn’t win, it’s not because her opponent played well.  It’s because she didn’t.  And while that can certainly be true, I don’t think she ever believes another player can simply beat her.  She may try to come across as gracious, but in my opinion, it’s an act.  She truly believes she’s better than others (not just in tennis) and expects to be treated so.

And what especially bothers me is how the media treats her.  I feel the commentators only say nice things about when there are times they really shouldn’t be defending her or making excuses for her.  They shy away from talking about her fitness level.  They ooh and aah over her “fashionable” tennis outfits.  She should not complain about how she’s treated unless she also wants to give up some of this bias.

Are people afraid to say something negative about her?  It almost seems that way.  Especially when it comes to what she wears in tournaments.  Come on people, Serena is a big girl.  She does not have a typical tennis player physique.  And she wears some of the worst tennis outfits possible for someone her size.

Here’s one of her latest, from this year’s French Open.  She claims it wasn’t just a fashion statement but something that was “medically approved to help her with blood clots”.  Hmmm.

And by the way, French Open officials banned this type of outfit after this year’s tournament.

If you follow tennis closely, you know this isn’t the first time Serena’s been involved in questionable behavior.  Do you remember the foot fault incident in 2009?  Approaching the lineswoman who made the call, shaking her racket and pointing, Williams said: “I’m going to shove this [expletive] ball down your [expletive] throat,” according to CBSsports.com.

This latest controversy first involved an accusation of coaching, which her coach actually admitted after the match.  She continues to deny it herself, however.   “I don’t cheat to win, I’d rather lose,” Williams was heard telling the chair umpire.

Then she was penalized for smashing her racket.   In response Williams says: “Every time I play here, I have problems. I did not have coaching, I don’t cheat. You need to make an announcement. I have a daughter and I stand for what’s right. You owe me an apology.”

And finally, for verbal abuse of the chair umpire.  Williams unleashes a volley of abuse, saying: “For you to attack my character is wrong. You owe me an apology. You will never be on a court with me as long as you live. You are the liar. You owe me an apology. Say it. Say you’re sorry. How dare you insinuate that I was cheating? You stole a point from me. You’re a thief too.”

Serena was fined $17,000 in total for the three violations which tennis officials are supporting the chair umpire.

My reaction and a couple others

First, I have to say how sorry I feel for Naomi Osaka, whose first grand slam has been tarnished and she’s been made to feel bad for beating Serena.  For I blame the crowd more than Serena.  It sounds like she tried to squash the booing.

Osaka shouldn’t be made to feel she has to apologize for beating Serena, especially since she was winning the match before all this happened.

Second, there’s been a lot of discussion around the sexist aspect of her treatment.  However, you have to realize that the chair umpire, Carlos Ramos, is known for following the rules by the book.  Would he have handled a male player the same way?  Possibly.  I’ve listened to an interview where examples were given where he did just that, as recently as the 2018 French Open, when he gave both Novak Djokovic and Rafael Nadal time violations.

Third, whether it would have been applied to a male player or not, her behavior was not appropriate.  I agree with Martina Navratilova who said  “I don’t believe it’s a good idea to apply a standard of ‘If men can get away with it, women should be able to, too,’ ” Navratilova said of Williams in her New York Times editorial. “Rather, I think the question we have to ask ourselves is this: What is the right way to behave to honor our sport and to respect our opponents?”

Mary Carillo, who frequently is part of tennis broadcasts and is someone who typically gushes over Serena, is saying that Williams occasionally “acts like a bully.”  Speaking on MSNBC, she suggested that with a chance to tie Margaret Court’s record of 24 Grand Slam singles titles at stake, “the pressure got to” Williams, who should have understood that the “rules” of tennis dictated her punishment.  Williams “ended up poisoning the atmosphere” for Osaka, who could scarcely celebrate her first Grand Slam title, Carillo claimed.

And finally, to say she has a daughter and that’s why she wouldn’t cheat?  Come on.  She’s used the mother excuse way too much.  Do you see other tennis player mothers talking so much about it?  No.

There will always be controversy in any sport where subjectivity is a part of how rules are enforced.  I don’t have any stats on this, but I have to believe that even with the ability to review line calls these days, the majority of them are still called correctly.  Can’t we all just be good sports?

4 thoughts on “Controversy in Tennis”