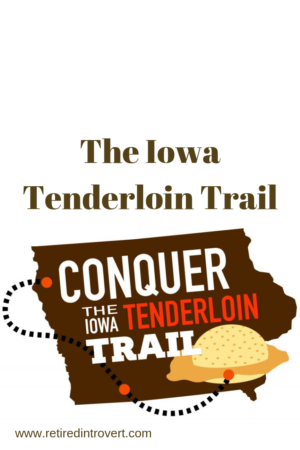 If I’d been blogging a year ago, I would have written this post then.  For those of you that are also my personal Facebook friends, you know that Tim and I embarked on the Iowa Tenderloin Trail last summer and into the fall.  In fact, we’ve almost reached the one year mark of our finish.

It all began because both Tim and I love breaded tenderloins.  We had seen articles in the newspaper about who the Iowa Pork Producers named each year as the best tenderloin in the state.  We started with Nick’s on Army Post Road and then ventured farther out to Goldie’s in Prairie City.

As we sat at the counter at Goldie’s, eating our tenderloins and their delicious ice cream, we noticed a sign on the wall.  It advertised the Iowa Tenderloin Trail, which consists of fourteen of the annual tenderloin winners.  If you conquered the trail (visited at least ten of the fourteen within two years), you would get a t-shirt.

Well, we couldn’t let that challenge pass us by, so we checked into it further online.  Once there, we were able to download our “passports” so we could log our stops along the trail.  (Little did we know, we could have asked for a passport at Goldie’s, which was a nice shiny brochure.  Our downloaded paper copies got a little worn after all the use.)

Starting on the trail

Once we got our passports, we realized we’d already been to two of the stops.  Oh darn, we have to go back!!

We officially started on June 29.  Our plan was to start with those close by and work our way into other areas of the state.  So, we went to The Other Place, which was a surprise to us that it was even on the list.

One thing I wish we’d done was to jot down our assessment of each tenderloin after each meal, so I could do a more thorough job of writing this.  And of course, when we were done, everyone asked us what our favorite was.  Honestly, there wasn’t a bad one in the bunch, so that made it difficult.  Keep reading, though, and I’ll let you know those Tim considered his Top Five.

It was so exciting getting our first stamps!!

Continuing on the trail

Tim’s day off is Monday, so we tried to hit a place every week.  The challenge was, not every place was open on Monday.  So, we had to get to a few on Sunday, and even one on Saturday night because it wasn’t open Sunday or Monday!!

Tim did a good job of mapping out each location, so we could decide each time how far we felt like traveling that day.  Our longest trip was two hours but we had several that were an hour or longer.  We made an adventure of it, oftentimes taking a different route home so we could enjoy the Iowa countryside and drive through towns neither of us had seen before.

Many of these places also served ice cream, so of course, we had to sample that as well.  And Tim decided he’d have coleslaw as his side at each place, so he tasted a lot of different types.  Again, we should have kept track in more detail, as he could also rank the coleslaws!!

OK, here’s the list of where we went and when.  As you’ll see, we stopped after ten so we could get our t-shirts.  But we did that mostly because the remaining four were just too far away.  I wonder if anyone completed the trail as quickly as we did – three months!!  😮

We earned our t-shirts

Right after the Dairy Sweet, we sent in our completed passports and our shirts arrived shortly after.  We took our picture for last year’s Christmas card wearing them.

Don’t ask me to explain why he chose these.  As I mentioned, they were all good and even when we finished a year ago, it was difficult to remember what we liked about each place.  We continue to eat at Nick’s especially now that they have a location in West Glen.  It’s unfortunate that most of these are just too far away for us to regularly visit.

We didn’t start taking pictures until later in the summer, so we don’t have one for every location.

Other places not on the trail

We’ve actually found other good tenderloins that either winners but didn’t make the list of fourteen or weren’t a winner at all.  These are all worth a try!!

I am also part of a Facebook Group – Pursuing Pork Tenderloin Sandwiches.  Talk about overwhelming!!  As of today, there are 23,020 members, and new ones are joining all the time.  We might try a few mentioned here.

I don’t think we’ve truly found one yet that can compete with the tenderloin of my childhood – in Webster City.  Maybe it’s one of those memories that’s become better than it actually was, but they’re no longer there so I guess we’ll never know.  😘