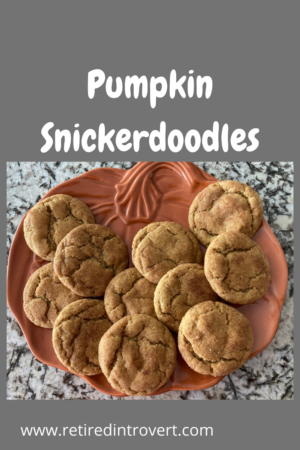 We woke up to snow on the ground today. A bit too early in my book but it does get one in a baking mood, doesn’t it?

I seem to have some of my baking mojo back and I’ve experimented with a new recipe for fall. I’ve always loved snickerdoodles but for some reason, never think about making them. I guess my mind always goes to something chocolate!!

When I saw this recipe for snickerdoodles that includes pumpkin, I thought it would be something Tim would like. So, last week I made some.

They are pretty good. The pumpkin flavor isn’t overwhelming at all and you still get that chewy cinnamony goodness that is the trademark of snickerdoodles.

Two things you need to plan for:

Since they take such a small amount of pumpkin, you’ll have plenty left over to make a batch of pumpkin bread, which I also made last week. In my pumpkin bread recipe, you’ll find a recipe for making your own pumpkin spice, if it’s not something you have on hand. 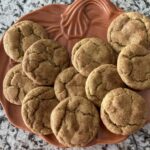 Super soft and chewy. The best combination of pumpkin, cinnamon and sugar.