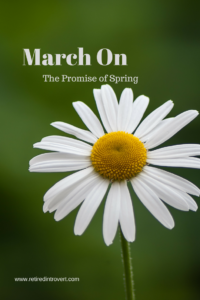 I was watching the Big Ten basketball tournament last night and saw banners saying “March On”, and decided that is the perfect name for today’s post.  There’s so much March fun to look forward to.

I already know March will go by quickly. And I’m OK with that!!  March means spring is in sight and I love spring.  I love the new green color on bushes and trees, as well as the beautiful pinks and purples on the flowering trees.

I sure hope our trees bloom this year.  I attributed their lack of blooms last year to being newly planted (we planted them in October of 2016), so maybe this second season will be different?

We also completed extensive landscaping last spring (after the torrential rains and before the hot and dry).  Despite their tough start, the plants all did very well.  I took very good care of them, watering them almost every morning.  It was a big job and I sure hope it pays off with gorgeous bushes and flowers this year.  I’ll let you know later how things look.  (I’m most curious about the clematis.  They were the toughest to get going.)

I’ve also decided this year I will start some seeds inside, so they’re ready to go when I plant in May.  Last year, I tried Morning Glory, but they didn’t bloom until September!!  And I love zinnias, so I’m going to start a few varieties of those.  I’ll keep you posted on how this goes.  Tim thinks I’ll have trouble because of my BFFs.  We’ll see.

So, why do I think March will fly by?  There’s so much fun stuff going on in March, that’s why.

We leave soon for a week in Florida.  I know Tim is especially ready this year.  March is a great time to go.  I’ve been going for years, and while we’ve experienced some cold or rainy days, the majority of the time is wonderful with temps in the high 70s/low 80s and lots of sun.

We’re staying at my favorite place in Indian Shores, which is on the Gulf Coast just west of Tampa.  Last year, my mom and dad went with us, so we had a beautiful two bedroom condo on the top floor.  We had fabulous views in all directions.  And we had great weather.

This year, with just Tim and me, we have a one bedroom on a lower floor.  We’ll have a decent view of the Gulf.  This condo was owned by the same people as the one from last year, but sadly, they sold it.  I rented last year through VRBO and this guy was so easy to work with, and they furnished the condo better than any I’ve been in before.  I was hoping we could experience that again.

Now we’re back to renting through a management company, which probably means we won’t have enough towels and we’ll have to buy things like toilet paper and paper towels.  I’ll make sure we pack beach towels too, as prior experience tells me they won’t have any for us.

Whatever, we’ll still have a fun time.  Tim’s already scoping out new places to eat, and while he says he wants to try different things, I have a feeling he’ll still get grouper most of the time.  You know, that’s the only time he can get it!!

We’ll check out some of our favorites too, like The Pub.  They have outdoor seating along the Intracoastal Waterway, and on a nice warm day, it’s a great place for lunch.  Tim also liked their grouper sandwich.

We also plan to visit a new area.  With all my years going to Florida, I’ve never been to Ft Desoto Park.  So, we’ll spend some time there.  It’s along the Pinellas Bayway, which connects St Petersburg Beach and St Petersburg.  Supposed to have a great beach and a fun place to find shells.

The Florida trip also means spring training baseball.  Both of our favorite teams train in Florida, which works out great.  And both are within an easy driving distance from where we stay.

Our first game will be in Lakeland to watch Detroit (Tim’s team) play the Washington Nationals.  This will be our third time there, so we have the routine all worked out – route to take, where to park, etc.  Last year, they revamped the ballpark, with more seating and other amenities.  Games are at 1:00, so we always eat lunch there.  It’s our chance to have some ballpark food!!

The trip takes a little over an hour, but we have to drive through Tampa to get to I4.  And if you’ve ever driven on I4, you know it can be a bear.

We also discovered that this time in March is the Strawberry Festival in Plant City, which apparently draws big crowds as we experienced some traffic delays around those exits.  This is a big deal – it lasts 11 days and it appears they have some good entertainment.  Sounds kind of like our State Fair.  Maybe we’ll have to check it out someday.

Our second game will be to watch the Pirates (Linda’s team) play the Tampa Bay Rays in Bradenton.  I love going to this ballpark.  It used to be called McKechnie Field, but last year they changed it to LECOM Park.  What a horrible name.  But that’s what happens, I guess, when you need a sponsor to cover expenses.  I think it’s unfortunate; I liked the McKechnie Field name.

Last year, I bought a Pirates cap and a t-shirt.  I can’t wait to wear them and possibly look for another shirt.  Unfortunately, Andrew McCutchen isn’t with the Pirates anymore.  But I have to admit, I’m not a very good fan these days.  It’s not easy to be a Pirates fan when you live in West Des Moines, Iowa.  I try to keep up with their schedule and catch them when they play the Cardinals or the Cubs.

This trip also takes a little over an hour, but we get to drive over the Sunshine Skyway, my favorite bridge in the whole wide world.  And we get to go twice – there and back!!

March is also a good month for tennis.  There are two tournaments in the US:  Indian Wells Masters in California and the Miami Open in Florida.  They include both men and women professionals and are just a step down from the Major tournaments like the US Open.  If you want to experience live tennis, they’re a fun way to see all the big name players, without the hassles of New York.

Indian Wells starts March 9 and the Miami Open on the 23rd.  Since they’re in the US, I can watch during the day, unlike the Australian Open when most everything was on in the middle of the night.  Thank goodness for the Tennis Channel.  However, I’ll be in Florida during a good share of the Indian Wells Masters, so I won’t be watching as much.

I’ve been to the Miami Open twice.  It’s not as easy to navigate as the W&S Open in Cincinnati, but it’s still worth going.  It was convenient as part of an already planned Florida trip.  I will be able to catch it on TV.

And last, but not least, the NCAA tournament will soon begin.  That will also have to be scheduled around the Florida trip, but that shouldn’t be a problem.  We pretty much hang around the condo after dinner anyway.  I know Iowa won’t be there, but we’ll watch Tim’s Ohio State team, as well as the other Big Ten teams.  As you know, I love basketball, as captured in my last post.