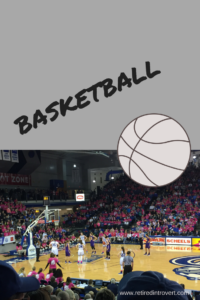 Sunday was the last home game for the Drake women’s basketball team.  It’s kind of bittersweet – another year until we can go to the games again, but it also means spring is just around the corner.  And I’ll take spring!!

I’ve always had a love for basketball.  When growing up in Webster City, we didn’t have girls basketball, except for intramurals.  That’s not the same.

Evidently, at that time Webster City was considered a “big” school and only the small schools in Iowa had girls sports.  So, I became a great spectator.  I remember going to Jefferson Gym and watching the high school boys play.  That sure was a long time ago.

Then we moved to Ankeny.  And even though Ankeny was similar in size (at that time, anyway), they had always been a “small” school so they’d had girls sports forever.  I remember my mom talking about when she played basketball there.  (She grew up in Altoona.)  I was a junior in high school and decided this was finally my chance to play basketball.

I did play basketball my junior year, with the sophomores.  Remember, I was new to this so I couldn’t expect I’d be good enough to play on the varsity team.  I had fun playing and made some great friends.  I even went to a basketball day camp in the summer and won the free throw shooting contest for guards!!  Reminder:  this was when girls basketball was 6 on 6.

But while basketball may be in my DNA, it wasn’t in my blood.  I just hadn’t had all the years of experience the other girls had.  And not only from an athletic perspective, but more from a mental perspective.  I didn’t have the drive.  There were other things more interesting to do.  So, I didn’t play my senior year.  I became a spectator once more.

I remember every Sunday watching the NBA games.  I was a big Boston Celtics fan.  And the season end championships were great to watch.  But NBA basketball doesn’t interest me anymore.

I went to the University of Iowa and became a huge fan of the men’s basketball team.  My first year was Lute Olson’s first year.  Sadly, they weren’t that good.  But I loved the atmosphere in the old Fieldhouse, even though my first year I had “restricted view” seating and had to peek around a big pole to see parts of the floor.  And we sat on bleacher seats, so we were all crammed together.  It was still great!!

I never missed a home game, even on those cold winter evenings when I had to walk from my sorority house across the river to the Fieldhouse.  These were the days before the Cambus operated on weekends.  Brrr.  But I was a very loyal fan and I couldn’t miss a game.  I listened on the radio to any away game I could.  This was also before every game was on TV.  It wasn’t easy to be a loyal fan!!

After college, I still watched Iowa basketball.  They were starting to play well and more games were on TV.  I would have loved to be able to go to the games in person, but a two-hour drive, especially with our unpredictable winter weather, wasn’t going to work.

I started going to the Drake men’s games with a friend.  This was before the Knapp Center when they played at Vets Auditorium.  They had a lot of up and down years, and eventually, we decided to give the women’s games a try.  They were actually doing well and honestly, were more fun to watch.

For a while, we went to both the men’s and women’s games, then just the women’s games, and then both again for a time.  I was getting to watch live basketball and even though some of the seasons were disappointing, I enjoyed being with the crowd and even going to some games out of town.

It was simply fun to have a team to root for.

The best season for the men was 2007-2008.  It was a surprise and once they started winning, they kept winning.  The Knapp Center was electric with excitement every game.  The loyal Drake fans were finally getting the winning team they had craved for years.

Going to the MVC tournament in St. Louis that year was one of the best experiences of my life.  We got to know other fans so well after spending four days together watching all the teams play.  Drake won every game and were the conference tournament champions.  This meant going to the NCAA tournament.  Wow!!

Unfortunately, the storybook ending wasn’t to be.  They lost their first game.  And they should have won.  But that’s the way the ball bounces.

The last few years, I’ve started watching Iowa basketball again.  I took a break for a while; it just didn’t interest me.  This year hasn’t been so great but I’m still watching.  I try not to be a fair weather fan.

And we go to the Drake women’s games for our live basketball fix.  We also watch the Iowa State and Ohio State games on TV, and I’ll try to catch other Big Ten games on the weekends while I’m working around the house.  It helps me get to know the other teams in the conference, which makes watching even more fun.

There’s just something about having a basketball game on that makes me happy.  Basketball is what gets me through these long Iowa winters.

It’s been true from the start, but the Drake basketball fans tend to be older.  There’s a lot of gray hair in the stands at these games, especially the women’s.  (I’d better be careful; we’re starting to fall into the “older” category.)

And the fans around us make us laugh.  Every game, they call the refs the worst ever!!  Every time we have the ball, there’s a foul.  As Tim says, if the refs called every foul the fans wanted, we’d never finish the game!!  I’m convinced they don’t know much about basketball.  They just want their team to win!!

The Drake women won their conference title again after Sunday’s game.  Two years in a row, and potentially, two undefeated conference seasons in a row.  They just have to win two more games.  (Hope I didn’t just jinx them.)

I have to think they’ll win the conference tournament again and go to the NCAA tournament.  I don’t know that they can win a game, but it’s still an honor to get there and we’ll root for them as always.  There was only one senior on the team this year, so next year already looks bright.

It’s almost March Madness and I can’t wait.  But more about that later this week.  Stay tuned!!

Are you a basketball fan?  What gets you through the winter?  Anything else that fires you up?

3 thoughts on “Fired Up for Basketball”