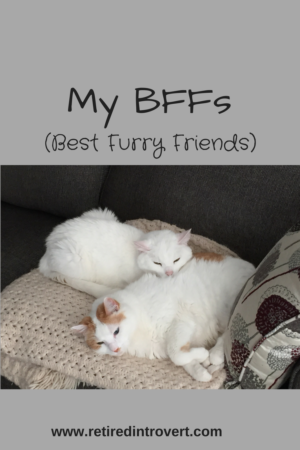 I always thought I was a dog person, so I assumed someday, my best furry friend would be a dog.

We got a dog when I was in 8th grade and she died when I was 28.  She continued to live with my parents, of course, after I left home.  But she was still my dog and was always happy to see me.  She would stay with me when they were out of town.  I will never forget the day she died.  It broke my heart.

Over the years, I would think about getting a dog, but never thought it would be fair to the dog.  I was gone a lot and I wanted the flexibility to travel, etc., and not have to worry about the responsibility.  I thought maybe after I retired, I’d consider it.

Recently, while searching through my “mementos” tub, I found an old scrapbook of mine.  Based on that, I clearly loved cats at one time.  I had lots of pictures of cats, and I wrote five stories when I was in 6th grade about a cat named Spaghetti-O.  I tried to find them but they appear to be gone.

Here’s proof they existed.  Sorry if this is hard to read.  I found it in my scrapbook.  And sorry that I digressed from my topic. 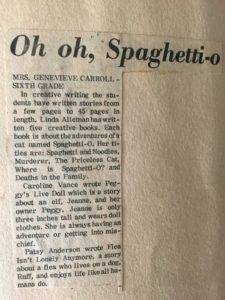 My Furry Friends – Mickey and Brutus

When Tim and I started dating, I knew he had two cats.  They were friendly enough and it seemed Mickey always wanted to sit with us.  I would leave Tim’s house covered in white hair.  (As you can tell from the picture above, they are all white and mostly white cats.)  Plus I’d heard so many horror stories about cats jumping on counters, etc.  I did not want an animal on my kitchen counters!!  Needless to say, when we decided to get married, I was a little concerned about living with two cats.

As I think is true with many cats, they did not like moving.  Brutus would cry loudly the whole time he was in the carrier and Mickey became catatonic.  They had to endure that twice, as Tim had moved once before we moved in together.  I have to say, though, they both recovered well and have never been a problem once they settled in.

Tim had always shut them in his basement during the day and at night, so they weren’t used to being out all day.  When we first moved into our house, we did the same thing, since we were both working and gone all day.  And while we’re sleeping, I like that they can’t bother us all night.

I still didn’t like the cat hair everywhere, but we tried to limit where they sat on furniture by providing them with afghans and blankets.  I have sacrificed an afghan and a fleece blanket for them.  Neither can be used by a human at this point, unless you really like white cat hair!!

After I retired, it didn’t make sense to lock them up all day.  They loved having the run of the house.  And eventually, we even let them stay out when we left the house during the day.  We still put them downstairs at night.  When we went on vacation, or away for a weekend, we’d put them in the basement.  My friend Mary would come over and make sure they had food, water and clean litter boxes, but they had to stay in the basement.

One time, as we were getting ready to head to the airport, I said to Tim “why don’t we just let them stay out while we’re gone?”  They rarely go where they aren’t supposed to, however, Mickey can still jump pretty well and has occasionally been a little naughty.  We left fresh flowers on the table (stupid, I know) and he evidently got up and knocked them over.

Brutus likes to get on the chair and then the side table, and has knocked things over there too.  For some reason, he’s fascinated with water.  Actually, we used to put the flowers on that side table and moved them to the dining table after Brutus knocked them off.  Maybe we shouldn’t have fresh flowers????  We have learned and now put the flowers in the sink when we’re gone.

Since my retirement, the three of us have developed our own routine.  On workdays, Tim gets up before I do and shuts the doors to the bedroom so they won’t disturb me.  He opens the doors when he leaves and these days, they patiently wait for me to get up.  A couple of days this week, I got  up and found Brutus laying on the bedroom floor and I had no idea he was there.  Mickey used to meow at me and sometimes jumps up with me.  But lately, he’s been patient as well.

Mickey and I have a definite morning routine.  I sit in my reading chair with my iPad and read emails, Facebook, and play three games – Solitaire (the daily challenge), Nibblers (my favorite), and 7 Words (to keep my brain sharp – ha).  He lays beside me and I rub his tummy.  When I snap my iPad off, he knows it’s time to get up, although sometimes he gets up before I do.  I’m usually there about an hour, but sometimes longer, and he gets restless.

If I sit in that chair any time the rest of the day, he’s likely to join me.  It’s funny, but that’s almost the only time he’ll cuddle with me.  He will sometimes join us at night, but it’s rare.  He likes to be by himself in the evening.

My furry friends have different personalities

Mickey and Brutus are great friends, but they have very different personalities.  Mickey is quiet and sensitive.  Brutus, true to his name, is big and has to be a part of everything.  Mickey almost waits for you to invite him on your lap; Brutus just jumps up and makes himself at home.

They spend a lot of time together, but there are times when they fight.  It appears to be initiated by Brutus,  who will jump up where Mickey is peacefully laying and bite him.  Mickey, being more passive, just leaves.  Sometimes Brutus will chase him, but Mickey’s smart enough to know he can jump higher than Brutus can, so he’ll get on a dining chair or stool and wait it out.

We’ve all gotten to know each very well since I’ve been home all day.  After I get out of my chair in the morning, our current routine includes treats for the boys.  Mickey sits by the counter and waits and then Brute shows up.  We started giving them these dental treats, because Mickey has bad breath and we thought maybe his teeth were the problem.  Little did we know, that Mickey would be crazy about them.  I think he’s addicted.

At certain times during the day, he’ll patiently sit by the counter where the treats are.  Sometimes, Brutus shows up wherever I am, giving me that look.  I swear Mickey sent him to get me, because if I follow Brute, he leads me to where Mickey is!!  Softy me, I usually give in.  They’re good for their teeth, right???

If I’m in the kitchen, however, Mickey will get very vocal when it’s “that time”.  I don’t think he ever talked this much before those treats!!  At times, I do refuse to give him any, and he will eventually leave.  But if I go outside, for any reason, and come back in, he thinks it’s time for treats.

It’s funny too, how they seem to know what time it is.  I mentioned Mickey likes to be alone in the evening, so he’ll be upstairs while we’re downstairs watching TV.  One of his favorite spots during the winter is in my closet, right by the heat register.

Brutus is always with us, either on Tim’s lap or mine.  As it gets close to 10:00, Mickey will appear at the top of the stairs and watch us.  I actually call him “spooky kitty” because he just sits and watches and moves around so you never know where he might be when he’s watching you.

Helping around the house

My furry friends like to help me around the house.  Whether it’s baking, doing laundry or making the bed, I usually have “help”.

There are many things I could mention about them.  Guess I’m a proud mom, so I like to brag about my boys.  There’s always more time for that.

Let’s just leave it with this:  my best furry friends have definitely added to my retirement happiness.  I think it’s an advantage that they were older when they became “my boys”, as I didn’t have to go through the kitten stage.  (Although, kittens are awful darn cute.) But because they are older, they sleep a lot and don’t get too rambunctious, although Brute has what I call his daily ornery spell, when he tries to do all the things he’s not supposed to do.

Now that I have them, and realize I am a cat person (and still a dog person, too), I don’t know if I could survive without my BFFs!!