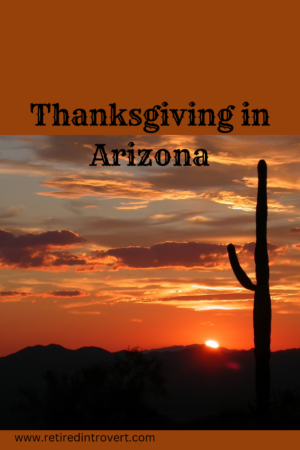 I guess the saying “third time’s a charm” is accurate. This is the third year we’ve planned to go to Arizona for Thanksgiving and we finally made it. COVID has definitely messed up our holiday plans over the last two years.

Tim’s mom and sister live in Arizona – Gold Canyon and Mesa. We try to get down there at least once a year, and we thought it would be nice to spend a holiday with them. But while it worked for us this year, it didn’t work for Tim’s sister. She and her husband were on a six-week cruise in Australia. Since Tim’s mom is now living in an independent living apartment, we were lucky to have the opportunity to stay at his sister’s house, even though she wasn’t there.

We had a good time but the trip was not without its surprises.

Our flight down went well. We try to take Allegiant so we can fly nonstop plus go into the Gateway Airport that’s smaller and closer to where we need to go.

Tim and I both like window seats so we take turns, with the other one sitting in the middle seat. I decided to save my window seat for the flight back so I had to fight for armrests all the way down. My seatmate to the right was a quiet older man, who I quickly realized was traveling with a small dog.

I jumped the first time she barked and he apologized profusely. He told me it was her first time flying, even though she was ten years old. He wasn’t sure if he’d be flying back since it seemed to be stressing her out and the pill he gave her wasn’t putting her to sleep. I actually thought she was pretty good. Who wouldn’t get antsy traveling in a small case?

He told me her name was Sophie, which I will never forget because my grand-niece is also Sophie. We talked just enough to be friendly, but not enough that I was perturbed. I prefer not to talk to the person sitting next to me unless it’s Tim!!

Once we arrived at the airport, I went to baggage claim and Tim went to get our rental car. After a bit, I saw him walking towards me and waving at me to come to him. He told me they wouldn’t rent a car to him because his driver’s license was expired. In Iowa, you have 30 days after your birthday to renew your license but evidently, that’s not good enough for a car rental company in Arizona. Tim’s birthday was nine days prior.

So, I was the one to rent the car and had to drive while we were there. We had several choices for our rental but when the agent said “Murano”, I jumped at it. If I’m going to drive, why not drive something I already know and like? It was a 2023 model and as is typical with rental cars, it didn’t have all the bells and whistles my Murano has. It did, however, have leather seats and Sirius XM radio. It was like driving my own car.

Tim’s cousin Denise (from Ohio) had been staying in Arizona since the beginning of November, and since Tim’s sister (Becky) wasn’t there and we didn’t get in until the day before Thanksgiving, she had to do all the shopping. We’d shared several text messages back and forth because we were going to cook and she wanted to get what we wanted.

We did discover that their local grocery store was open Wednesday evening and from 6:00 to 3:00 on Thanksgiving day, which turned out nice for us since we needed a few more things anyway.

So, here we are, in someone else’s kitchen, pulling together a Thanksgiving dinner. Tim was responsible for the dressing (although I chopped the onions and celery) and the turkey. I was in charge of the potatoes (mashed) and gravy. Denise’s husband brought sweet potatoes, and Tim’s niece brought green bean casserole and pie. The toughest part was finding the right bowls, pans, utensils, and spices. But we did it and I think we produced an excellent meal.

When we got in Wednesday night, we tried to watch TV but couldn’t understand how to find anything. We tried again Thursday morning, even after everyone arrived. They stream everything, so you can’t watch TV without the internet. We had been wondering why we couldn’t connect our phones, etc either.

Well, come to find out, they hadn’t paid their internet bill with CenturyLink!! We figured this out after several text messages and even a Facetime call to Australia. I know they’d been gone for three weeks at this point and weren’t going to need the internet themselves, but wouldn’t you think you’d have it for your guests?!? 😉🤣 We had a good laugh out of it. (We were able to get the bill paid and had internet immediately. Whew!!)

The next day, we didn’t push ourselves because our plan was to head to Tim’s mom’s place in time for the Iowa football game at 2:00. Anyway, we had a relaxing morning and Tim went for a run in the nice weather.

We also had an assignment: help her put up her Christmas decorations. She has a small storage closet off her balcony and that’s where everything is stored. We had to first find tubs for her fall decorations and then pull out all the tubs for Christmas.

I wanted to watch the football game, even though in typical Iowa fashion, they messed up what should have been a win. But we did a little of the Christmas stuff during the game. Because Tim is still recovering from shoulder replacement surgery, I had to pull down all the boxes from the top shelf. It wasn’t hard until I got to a heavy one. And I was standing on a small step stool with not a lot of room to maneuver. Fortunately, I got it down without breaking anything, including me!!

We got everything unpacked and let her decide where things should go. She definitely had a plan!!

We decided to get dinner and bring it back. We found an Applebee’s fairly close by and ordered online. Our pickup time was set for 6:00.

Well, now for our next adventure. I knew where we needed to go, but once we were there, we couldn’t find Applebee’s!! We drove around and around the mall it was close to and Tim even called the restaurant, speaking to a girl that was absolutely no help. We tried GPS again and again, and couldn’t understand why we weren’t seeing it.

Finally, we found it and it was right off the main road. But they had absolutely no outside lights on. The Applebee’s sign was not lit, and neither were any other lights on the building. By the time we got there, we were 15 minutes late and our hot food was cold. I guess now we at least know where it is!!

This was the day Ohio State and Michigan played football and it started at 10:00 am. Tim’s cousin and her husband joined us at Tim’s mom’s apartment for the game. Tim was not happy with the outcome. Our teams were 0-2 for the weekend.

We spent the afternoon with Tim’s mom and then planned to meet Denise and her husband for dinner at a local Mexican restaurant, not far away. Then back to our “hotel” to relax and get ready to leave the next day.

Everything continued to go smoothly. Surprisingly, the whole time we were there, we had no traffic issues. I’ve been there enough that I know my way around and we didn’t venture too far. I never felt stressed while driving.

Staying at Tim’s sister’s house was wonderful. Well, except for the bed. We chose to sleep in the guest room and were warned the mattress was hard. Oh boy, was it ever. But we couldn’t have asked for better accommodations. I just hope we left it the way we found it.

Once we got to the airport, we returned the car and then started walking to the terminal. All of a sudden, I noticed a guy from the rental company running toward us. We had evidently given him the keys to my Murano and still had their keys!!

Note: this was not my fault. For some reason, Tim had chosen to bring the extra set of keys to my car (even though my keys are always safe in my purse) and when he was messing around with all the keys, he put that set in my purse and the rental car keys in his pocket. I, of course, assumed the keys on the top in my purse were for the rental car and so those are what I gave them when we turned the car in. That was a close call!!

Lastly, as we were getting ready to go through security, Tim had pulled out his Discover card instead of his driver’s license. Hmmm, guess that won’t work. Another laughing moment.

Don’t you wonder why neither airport pointed out his expired license? Seems I’ve been reminded by airport security when my license was about to expire.

Let’s just say we had an interesting trip. And by the way, we saw Sophie and her owner again on our flight. They didn’t sit by us this time, but I did hear her bark a few times. He must have decided flying with her was better than driving with her!!

2 thoughts on “Thanksgiving in Arizona”