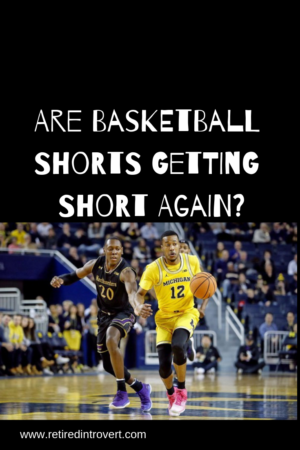 As I revisit prior and potential blog topics, I’ve noticed I have a lot of questions!! I don’t know about you, but these things pop into my head and I must research them and/or contemplate them.

As a result, I decided to start a series called Question for Today, in which I’ll do what I can to answer life’s little questions. Some will be helpful, while others will be a little quirky. There won’t be a schedule for this series; I’ll just post as these come to mind.

If you have a suggestion for the Question for Today, pass it along. I’ll see what I can find out!!

Have you noticed what I have over these last few months of watching basketball? It seems that the player’s shorts are getting shorter and tighter. Is that my imagination or have you noticed it too?

I hated it when basketball shorts got so baggy and long. They looked like skirts. I didn’t know how anyone could even play basketball in those things. You’d think a player’s legs would get all tangled up, making it challenging to move quickly.

According to The Evolution of Baggy Basketball Shorts, Michael Jordan was the initiator. It started because he wanted to wear his North Carolina game shorts underneath his Chicago Bulls shorts. To make that easier, he asked Champion (who made NBA basketball shorts in the 1980s) to make his shorts longer and wider.

Others started to wear them too, but it didn’t become noticeable to most until the early 1990s, when Michigan’s Fab Five began wearing them so they could be “like Mike”. Evidently, everyone wanted to be “like Mike” because they soon became the thing across all of basketball.

Nowadays, you’ll see players rolling over their waistbands (often up to three times) or pulling up the legs of their shorts in order to make them shorter. And I think the shorts themselves are gradually getting smaller.

The NCAA has never had a rule about the length of shorts. Their only rule is that the shirt must be tucked into the shorts. The style of the shorts is determined strictly by fashion trends.

The length of basketball shorts has never been determined by who makes them or whether or not they improve performance. Again, it’s only been about fashion. However, now some players, especially females, say the shorter shorts make them more agile. Hmm. I think I could have told them that 25 years ago!!

It’s funny that Michigan started this baggy trend in the early 1990s because now their players are promoting the opposite. According to this article, a Michigan player has this to say about shorter shorts.

“It’s a little bit of look and a little bit of comfort,” Jordan Poole said. “I feel . You don’t want the ball to hit the shorts. When you’ve got shorts that are not blocking your knees, you feel like you can jump higher, run faster.”

And what’s with those tights?

Uniforms aren’t as simple as they used to be. First, we saw players wearing t-shirts under their basketball jerseys. Did they start that because they got cold? Seems hard to believe these t-shirts don’t make them hotter and sweatier during a game. Do they simply like the look? 🤷‍♀️

And for a few years now, we’ve seen players wearing tights under their basketball shorts. These are compression tights and they are supposed to provide several benefits. Or is everyone wearing them because they think everyone else is?

Unlike the baggy shorts, compression tights do have benefits. According to this article, those benefits include:

They won’t make you play better or even look better, even if they make you feel better. But we sure are seeing them a lot these days. Pay attention the next time you watch a basketball game.

What about tennis players?

As you know, I’m a big follower of professional tennis. So I wondered why we don’t see more compression leggings in tennis, as you’d think tennis players would want those same benefits.

Actually, some of the women do wear leggings under their tennis skirts, primarily when it’s colder outside. But Serena Williams has worn them even when it’s hot, saying the compression leggings are needed for medical reasons.

Some tennis players will also wear compression sleeves. A compression arm sleeve helps to improve muscle awareness and provides support. By wearing a compression sleeve, players might find they’re able to hit powerful serves, backhands, and forehands, and lose less power as they get deep into matches.  It can also help with tennis elbow.

Just as with sports equipment, new materials are created that provide benefits in clothing and athletes realize they need to keep up to be competitive.

But lets hope basketball shorts don’t become skirts again. I’m not in favor of the skin-tight short shorts of the 60s and 70s, but I do prefer shorts over skirts!!

It’s safe to say, sports uniforms will constantly change. And fashion will always be a part of it. How else will the big athletic companies keep getting the fans to buy their stuff?

2 thoughts on “Are Basketball Shorts Getting Short Again?”