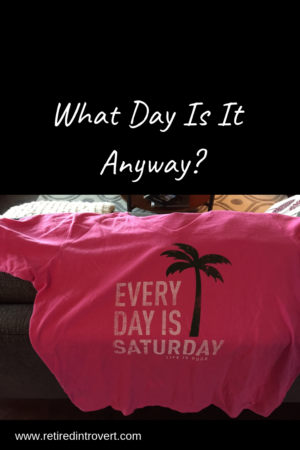 Since I’ve been retired, I’ve never had much trouble remembering what day it is. Until recently. Does that mean I’m finally in retirement mode? Do any of you have a problem with it?

First, it was the holidays. I’m sure that even messed up those of you still working. That will be even weirder later this year when Christmas and New Year’s Day are on a Wednesday. As my brother-in-law evidently said, “I don’t even know when it’s garbage day!!”

Then it was this past weekend, another holiday for some of you. And for my husband. Since his normal day off is Monday, his day off becomes Saturday when the holiday is on Monday, making for a nice three day weekend.

The weekend weather forecast was for snow and bitter cold. In fact, the snow was supposed to begin later on Friday. So, we decided I should do our weekly grocery shopping on Friday instead of waiting until Sunday or Monday. We typically do this together, but at times like this, I go alone.

It meant I had to do some quick meal planning so I’d know what to buy, which can be a challenge. I get tired of the same old thing. Tim’s actually good at coming up with ideas. In fact, I’ll soon post an excellent recipe he found and we tried last week.

Anyway, I wanted to avoid both the snow and the hoards of because we know what happens when the weather people say we’re going to get snow. I left home around 9:00 AM and was happy to find the store wasn’t crowded yet.

I wanted to tell everyone I was there to do my normal shopping and not because of the snow, so they wouldn’t put me in that “rush to the store” category of people. But I know they didn’t really care. 😉

I spent the rest of the day blogging, reading and finished the final season of “House of Cards”. I thought I had two episodes left but found out there was only one more to go. I was kind of disappointed in the ending. Did it seem like they were setting us up for another season?

It did start to snow later in the day and we were happy to be home with nowhere to go.

With Tim home, it didn’t seem like a Saturday. We got a fair amount of snow, and it’s so nice that we don’t have to shovel our driveway or sidewalk.

Tim ran on the treadmill, I baked chocolate chip cookies (at his request), and we watched some good basketball games. We decided to go to church because we had lunch plans on Sunday and this meant we could leave earlier. This was not my usual Saturday at all. Well, maybe the baking and the basketball, but definitely not going to .

Sunday we woke up to more snow, which we did not remember from the forecast. Our plan was to pick up Tim’s son in Ankeny and get to Hickory Park in Ames by 11:30. We thought we might be able to avoid the crowds that way because if you’re familiar with Hickory Park, you know how crowded this place can be.

Even though it was snowing, the roads weren’t bad. It was actually kind of pretty. But it was definitely cold.

We got there early – about 11:15 – and didn’t have to wait at all. Woohoo! By the time we left, however, there were bunches of people waiting. We were smart to get there early.

Oh, and some idiot parked so close to us, Tim had to get in on the passenger side and crawl across the console to get in the driver’s seat. As we were pulling out, and considering writing “idiot” in the snow on the back window, three people jumped into that car and took off. I think they probably watched us struggle and then once we were finally leaving, they jumped in and sped off. What are people thinking????

We wanted to get home in time for the NFL playoff games that started at 2:00. Even with the stop in Ankeny, we were home by 1:40, so no problem. I did a few things and then settled in my recliner with my cross stitch. I knew this was a prime day to accomplish a lot and I was right. I was able to put in 6 hours of stitching time on my first #stitch9challenge project of the year!!!

I’m used to Tim being home on Mondays so it felt a little more like normal. We went out for lunch and stopped at the mall to pick up a few things. Since it was a holiday for a lot of people, the mall was bustling. We focused on the shopping we went there to do and then headed home.

It seems like we run around a lot on Tim’s days off, so it was nice to have a couple of days where we could just be home and each do our own thing. We didn’t even make evening meals. I had popcorn one night and Tim had a PBJ sandwich.

This week has been a little more normal. Tuesday was laundry day, as usual. Wednesday was a little baking (banana chocolate chip muffins) and card making (Valentines and a couple of February birthdays).

I had hoped to start on a sewing project, but as of today, I’ve yet to find the time. My problem is always getting started and honestly, I’ve kind of enjoyed not having my sewing machine (and cabinet, which I love) taking up almost half the room. Once I get started, then I’m committed to sewing for a while, because it’s not worth taking it out and putting it away every day. Maybe tomorrow?

I actually did some cleaning yesterday – both upstairs bathrooms, dusted and vacuumed the living room and our bedroom. Cleaning is not something I love to do, but it sure feels good when it’s done!!

And today? I’ll finish up this blog post and then bake a new cookie recipe. (The dough is chilling in the fridge right now.) If it’s good, I’ll share it with you later.

I have one card to finish up, I want to finish the paperwork to renew my passport, and then we’ll see what’s left of the day.

It could be a good day to get started on “Grace and Frankie”. I know Brutus wouldn’t mind some lap time!! 🐈