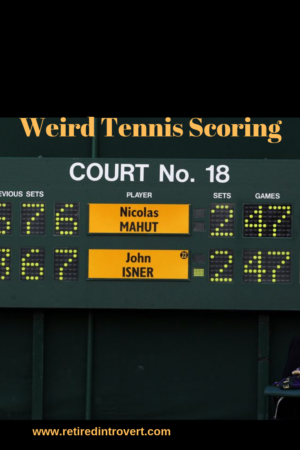 If you’ve read my blog for a while, you know I’m a big tennis fan. The French Open (Roland Garros) started on Sunday and I’ve been catching as much of it as I can.

It starts early in the morning here and goes to around 2:00, depending on the light situation in Paris. It’s much easier to watch than the Australian Open which is played primarily while I’m sleeping.

Wimbledon is coming up soon as well. I wrote about that last year.

Over the years, I’ve been asked a lot about scoring in tennis, because frankly, it doesn’t make a lot of sense. Even though I’ve been exposed to tennis since I was a teenager, and it’s become second nature to me, I understand how weird the scoring seems to someone unfamiliar with it.

Why is the first point 15? And then it somewhat makes sense that the next one is 30. But 40 for the third point? And why is zero “love” instead of zero?

Another aspect of tennis scoring that can be confusing is winning by two. This is true throughout – in a game and in a set. You can’t win by one point or one game. That’s why some games and sets can last a long time.

I’ll do my best to explain the logic behind tennis scoring, but my research shows there aren’t always answers. It might always be a mystery!!

To begin, let’s start with a tiny bit of history. I will try not to oversimplify in my attempt to be brief.

What we today call tennis originated in the 16th century and was popular in England and France. Promoter C. C. Pyle created the first professional tennis tour in 1926, with a group of American and French tennis players playing exhibition matches to paying audiences. Once a player turned pro he or she could not compete in the major (amateur) tournaments. Source.

In 1968, pressures forced changes that removed the distinction between pro and amateur, which marked the beginning of what’s referred to as the Open Era. At this point, players were able to make a living playing tennis and the popularity of the sport spread across the world.

I’m going to try to explain scoring below. If you want to learn even more, here’s an excellent source.

Why is zero called “love” and a tie “deuce”?

An often cited theory is that the term “love” in tennis scoring evolved from the French word l’oeuf, which means egg. Supposedly zero looks like an egg. But this has never been confirmed. Another theory is that someone with love has no money, explaining why having no points is love. I’m convinced we’ll never know how this came about based on these farfetched explanations.

Now deuce makes a little more sense, assuming it descends from the French word deux, which means two. Deuce occurs in a game when both players reach 40 points. And because a player must win by two points, the first point after deuce is “advantage”, typically shortened to “ad”.

As a player long ago, we indicated who had the advantage with either the word “in” (for the server) and “out” (for the receiver). I don’t hear this terminology used anymore.

Points in a game

The thought was the scores of 15, 30 and 45 were based on the hands of a clock. This also has never been validated, especially since a game like tennis might have begun before clocks were used. But it does make more sense than the 40 used today.

Another theory for the point 40 is that French students shortened 45 to 40, making it easier to say. In French, that would be going from quarante cinq to quarante.

Because you need to win by two points, a game can go back and forth between deuce and advantage a number of times. For a lot of players, being the server works to their advantage. But someone with a weaker serve may not fare as well.

Sets and the tiebreak

Before the tiebreak was introduced, some sets could be very, very long. Some of the major tournaments still don’t use the tiebreak in the final set. This resulted in the longest match in tennis history in 2010 when John Isner defeated Nicolas Mahut 70-68 in the final set of a match that took 11 hours over three days to complete. That’s 138 games in one set!!!

The tiebreak is played when a set has reached a score of 6-6. It was introduced as an experiment in 1965 and first used in the 1971 Wimbledon. The US Open was the first to use final set tiebreaks.

In a tiebreak, the players alternate serving and the first to seven points wins. These are ordinary points (1, 2, 3, etc.) and not the points of 15, etc. used in a game. They also switch sides after six points. And of course, you have to win by two points!!

While the tiebreak has been used in Wimbledon for many years, the final set was always decided without a tiebreak.

Hmmm. Are you even more confused? This will make a match shorter (hopefully), but not any easier for a fan to understand. Why can’t they be consistent across all of tennis?

Roland Garros (the official name for the French Open) still doesn’t allow final set tiebreaks. Haven’t seen the result of this so far, but I’m sure it will come into play at some point during the two week tournament.

Did you learn anything?

I hope you found this helpful, assuming you want to learn more about tennis scoring. I do tend to explain this a lot – to Tim. He tries but he wants it to make more sense. He expects me to have all the answers, especially why it’s done the way it is. And I just don’t know why!!

Now you can see why all of this is such a mystery. And probably always will be. 🎾🎾