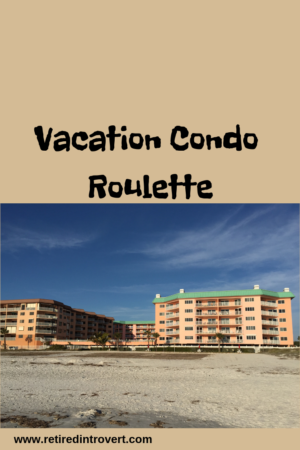 I’ve been traveling and staying in a condo since 1991. They are so much better than hotels because you aren’t reliant on restaurants for your meals, no one comes in to clean (usually), and it simply feels a little more like home with space to move around.

But when choosing your condo, you just never know what you’re going to get. I’ve stayed in condos on the Florida Gulf Shores, in Disney World, at Key West, and on Hawaii. In each case, at least initially, what you get is like spinning a roulette.

In the early days, we didn’t have the internet to help us find a good place to stay. We either found a condo through word of mouth, through a travel agent, or in travel magazines. I know the first time I went to the Florida Gulf Shores, we had no clue what we were going to get. It was all based on one little picture and crossed fingers.

I have to say, however, we did luck out that first time, and ended up staying in the same condo for 15 years, I think. (Need to check the travel journals.) It was far from perfect, but it became a known quantity and even though the condo itself needed a few updates, we liked the location and other amenities. (They did update it a little during those 15 years.)

After that first visit, we were hooked up with a local realty company so we had an easy way to book each year’s trip. At some point, we started going more than once a year, so they were able to find us other places to stay as well.

Now, there are so many options for finding a condo. But that still doesn’t guarantee you’ll find a great one. When you look at pictures, you can’t tell if the dryer squeaks incessantly or if the garbage disposal is the loudest you’ve ever heard.

In Florida, I’ve recently used a couple of realty but did all the booking online. Two years ago, I ventured into VRBO and found what is probably one of my favorite condos ever.

The problem with VRBO, though, is people come and go. As soon as you find one you like, the owners either sell or start working with a management company and no longer book through VRBO.

We had that experience after last year. We liked the condo we stayed in and thought we’d book it again for this year. But when I tried to find it, it was only available through Booking.com and the rate had skyrocketed. So, we had to start from scratch – again.

If you’ve ever stayed in a vacation condo you know what you can expect and what you might not get. For example, they tell you they provide towels for the week. What they don’t tell you is you only get four washcloths. For two people, that means they only last two days!!

We don’t mind doing laundry but come on. We shouldn’t have to wash towels the second day we’re there!! This year, Tim and I bought twelve cheap washcloths at Target so we weren’t so restricted. (And actually, they were better quality than the ones that came with the condo.) I brought them home clean and all ready for next year because I’m not going again without enough.

With pictures now, I can find a condo that’s a little more updated. Funny, as you get older, your expectations change. Where before I didn’t really care that the shower was part of a jacuzzi tub, now I prefer a walk-in shower. And I like a newer kitchen.

It’s impossible to know what kind of bed you’ll get. I’ve never been too picky about that, but now we like a King and it can’t be too soft or too hard. We’ve had good and bad ones. In fact, there’s one condo we won’t stay in again because of the bed.

The condo should never have carpet. It’s terrible when you run around the place and then see how dirty your feet are on the bottom!! Eeew!! While dirty floors aren’t limited to carpet, it’s even worse with carpet.

They are typically furnished with cheap stuff – dishes, glasses, silverware. And having furnished a condo for rental before (a friend had one for a while), I know you don’t want to spend a ton of money for people who might trash your place.

I also laugh when I see the teapot sitting on the stove. That’s a requirement from your management company, but who uses a teapot anymore?

One of my biggest pet peeves is the lighting. The lamps never have light bulbs with enough wattage to provide good light. During our trip two weeks ago, I took along a cross stitch project. I need good light for that. I ended up moving my recliner almost underneath the ceiling fan so I could see better. And even then, it wasn’t great. What’s so hard about putting higher powered light bulbs in the condo?

We’re spinning the roulette again for next year. Let’s see. This will be the fifth year for Tim and me and our fifth condo in the same location. I booked this one through VRBO and we hope we made a good choice.

We chose it because it has a balcony overlooking the beach. It has way more room than we need but we couldn’t pass it up. It will cost just a little more to stay there than the one bedrooms we’ve had that aren’t directly on the beach, but we decided it was worth it.

If you’re interested in where we stay, it’s a place called Beach Cottages in Indian Shores. It’s a nice location and it’s not a rowdy place to stay like some areas along the Gulf Coast. It has a beautiful pool deck overlooking the beach. The condos are rented individually through various management companies and VRBO.

No matter which condo you pick, it’s always a gamble. Something won’t work, the furniture (or bed) will be uncomfortable, the TV will be challenging to figure out, or your toilet will be finicky. We don’t spend a lot of time there, so it’s usually something we can handle for a week.

After next year, we hope to become snowbirds and spend three months down there. But that’s a story for another day.