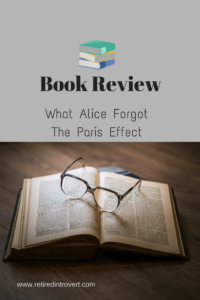 I’ve read a few books in March, so I thought I’d share my thoughts on a couple.

This book was written by Liane Moriarty.  It’s the third book by this Australian writer I’ve read.  One was selected by my book club, and actually, I think I was the one who picked it.  The last two I read outside of book club, but we have discussed them.  I know the others like her as an author and I will likely read more of her books.

While I gave this 3 stars in my Goodreads review, I did enjoy reading it.  I really liked the other two I read – The Husband’s Secret and Big Little Lies.  I wish we had HBO so I could watch the Big Little Lies series.  I think I’d love it.  Guess I’ll just wait for it to get to Netflix and binge on it then!!

Anyway, What Alice Forgot is about a forty year old woman who falls at the gym and loses the last 10 years of her memories.  It was interesting to read about her interactions with the others in her life who still had those memories, and who had experiences Alice knew nothing about.  However, this is the part I found a little frustrating.

Everyone seemed to “forget” that she had lost those memories and would bring things up that confused her but yet they didn’t do much to bring her up to speed.  Maybe that’s how it would be.  I guess it would be difficult to dump 10 years of someone’s life on them all at once.

It also took me a while to figure out that two of the characters were revealing more about their lives, and especially their thoughts and feelings, by writing to a former fiancé and a therapist.  In the end, I concluded it was an ingenious way to provide that information to the reader.

Those in my book club that had read the book liked it very much.  Since Alice was pregnant with her first child when she was 30, she didn’t have the memories of that child being born and growing up.  Through this process, she discovered things that had changed about herself (not necessarily positive), and she had a new outlook when dealing with her family and friends in the present.  This is the part that was appealing to others in my book club, as they could relate to how easy it is to get caught up in life and forget about what’s truly important, especially in your relationships with others.

I don’t think I’ve given away too much.  You should still be able to read the book and be surprised by what you read.

If you’ve already read it, or read it as a result of my review, please let me know what you think.

This book was our book club’s March pick.  I read it while on vacation and gave it 5 stars in Goodreads.  And there’s a sequel coming out in May – Paris Ever After – so I’ve already pre-ordered it.  The author (K.S.R. Burns) says while the two books are related, they can each stand alone but I suspect I’ll be glad I read this one first.

This book is about a young woman (Amy) who recently lost her best friend and is having a hard time dealing with it.  They had made a plan (once her friend recovered from cancer) to take a trip to Paris.  They’d even bought suitcases and filled them with new clothes.  Amy had recently lost her job and was home all day, relying on her husband of four years, so she squirreled away $5 and $10 here and there to save for the trip.

But her friend didn’t recover and they never took the trip together. Instead, she decided to take the trip on her own.

Most of the book is about her experiences in Paris and dealing with her feelings about what she wants, and doesn’t want, in her life.  She’s pretty confused and Paris provides her with a new outlook.

There were two reasons why I liked this book.  First, I’ve been to Paris so I could visualize and understand what she was experiencing.  However, I didn’t have the same kinds of experiences she had!!  Second, she obsessed about her weight and had this set of 33 “rules” she followed.  They’re actually listed at the end of the book!!

One of her rules especially resonated with me:  abstention is easier than moderation.  I don’t seem to do well with moderation when it comes to eating.  It’s better if I simply don’t have “bad” food in my house, because I don’t do well with rationing!!  And I have a husband who also likes to eat what we shouldn’t.

As with the book What Alice Forgot, if you read (or have read) The Paris Effect, please share your own review.

I’ve also recently read books by a couple more of my favorite authors.  See this post for the first two I shared.  I’ll share the next two with you soon.