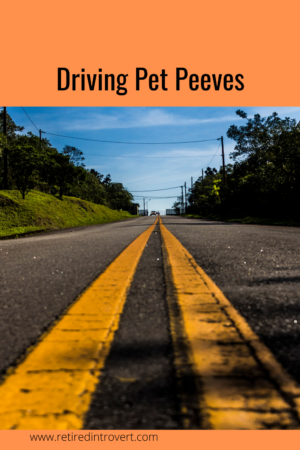 I took drivers ed 50 years ago this summer. I grew up in a small town and in the days when drivers ed was given in the summer to all 15 year olds. We took classes in the mornings and then drove in the afternoons.

My instructor was one of our guidance counselors and he lived just a street over from us. He would pick me up for driving and then I’d drive about a mile downtown to pick up our other two drivers. Their names were Lynn and Linda. I’m not sure if that was on purpose but it did make things interesting.

In my 50 years of driving, I’ve witnessed a lot of bad drivers. No, I’m not a perfect driver myself, but I do have a perfect driving record. So, I feel qualified to share my driving pet peeves. If any of these sound like you, sorry, not sorry.

I learned something in drivers ed that I didn’t understand then and don’t understand now. Why do I need to signal that I’m getting on the interstate when it’s pretty clear that’s why I’m on the entrance ramp? What else would I be doing?

We’ve all been behind the guy who doesn’t realize his turn signal is still on. Drives me crazy!!

What people are not doing

There are other examples of people only thinking about where they are right this minute and don’t get in the proper lane for where they’re going. Then they expect you to let them move into your lane.

Some of this is simply not being familiar with the road which I can understand. However, there are also those who think they’re special and don’t have to get over into another lane when there’s clearly a lane closure ahead. They drive all the way to the end and then expect some kind person to let them in. Sorry, I’m not that person!!

So many people are not paying attention. I don’t know if it’s cell phones, eating, messing with kids or pets, or simply daydreaming but there are drivers slowing down or speeding up and it’s annoying to be behind them.

They also tend to have trouble staying in their lane, which can be worrisome. What might they do when I try to pass? One of our cars has a sensor that vibrates the steering wheel and beeps when you cross a line without using a turn signal. Don’t people get tired of that going off?

Many drivers only think about themselves and not the others on the road. It drives me crazy when I see someone leave two or more car lengths between them and another car at a stoplight. Why? All it does it make it difficult for someone to possibly get into the left turn lane before the light turns.

I hate being behind someone trying to merge into traffic but isn’t going fast enough. It’s especially bad if this person decides to suddenly stop. Whoa!! I’m usually pretty considerate when someone is trying to merge when I’m already on the road, but I get impatient if they aren’t doing their part to slide right into traffic.

Why do people veer left in order to turn right at an intersection or into a driveway? They act like they’re in an 18 wheeler and need all kinds of room to make the turn. I don’t know about you, but my car’s pretty good at making right turns on a dime.

I imagine every state has “right on red” laws. I think it’s great that we can do that. But there’s so much abuse. I call these drivers “right on red abusers”. They’re the ones who think they either don’t have to stop first or they don’t have to worry about the cars coming down the road. I see people turning left on red, when they’re on a one way street. I actually checked to see if that’s legal. It is, but only if you’re also turning onto a one way street.

I also have trouble with drivers who pull out in front of you and then poke along. This even happens when there’s no one behind me. You couldn’t wait for me to get by first?

There have been huge debates in our legislature about traffic cameras. I’ve kind of lost track of where this stands, but I think some of them are now illegal. I don’t understand the debate. If someone is breaking the law either by speeding or running a red light, shouldn’t they be punished? Why does it matter how they’re caught?

One of the “objections” is that they’re used to make money for the city. That tells you how many people these cameras are catching, doesn’t it? Again, if you’re not doing anything wrong, why should you care? Everyone’s become so obsessed with losing their rights, they’re spending time on things that make no sense.

OK, I bet you have some driving pet peeves of your own, don’t you? Tell us about yours.