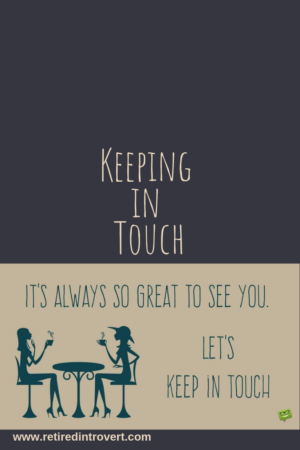 At the end of the month, I will have been retired for three years. I remember on my last day how everyone said: “let’s keep in touch”. I know people don’t mean to lie, but I wasn’t naive enough to think that would really happen. I know it bothers some people though.

I don’t know why it bothers them. Maybe they thought they were better friends with co-workers than they really were? Or it’s possible they are good at keeping in touch and think others will be too?

Some people are good at it

I may not be the best at keeping in touch, but I have some friends who are masters at it. I have to admit, they do all the work.

One friend of mine from college knows where everyone is and what they’re doing. He’s the only way I hear about some people I used to know but haven’t kept in touch with myself.

I have another friend that I met through work. Years ago, he found another job out of state. He would call me at work occasionally, just to check in and see what was going on. We shared a love for baseball and he actually got to meet my favorite player. I think he might have been his favorite player too since he named his son after him!!

Now that I’m not working, he sends me messages through LinkedIn. Not often; maybe not even once a year. But he never forgets to keep in touch. And the last time he was in town, we met for lunch.

I do have good friends from my work years that still keep in touch. Some are my closest friends, while others are simply people I enjoy seeing every once in a while. We do make an effort to get together a few times a year.

So why do people say they want to keep in touch, yet they don’t? Are they just being polite? If we see each other unintentionally, they’re always happy to see me.

How can we do better?

When I was younger, I loved writing letters. We moved right before my junior year in high school and I kept in touch with all my friends. This was WAY before social media and even email.

Even in college, I kept writing letters. I don’t write letters anymore and rarely even send email messages. Sometimes when something important happens we’ll all text each other. I think the important thing is, we know how to get in touch when we need to.

Facebook definitely allows me to know what my friends (close and not so close) are doing. When I was working, I hesitated to be friends with too many people from work. Once I retired, I added a lot of new friends. I probably now learn more about what they’re doing than I ever did when I saw them every day!!

I know, we’re all too busy. Keeping in touch is work. It requires time and effort. It doesn’t just happen. It’s like any relationship; you have to work at it. It’s easy to think they don’t want to be bothered when they probably would love to hear from you. It just takes one of you to get the ball rolling.

But with today’s technology, there’s really no excuse, is there? Instead of writing my blog, I could be writing emails to my friends. I know some of my friends think of my blog as a way to keep in touch with me. And I love that they view it that way and leave comments like we’re having a conversation.

I’m not a fan of talking on the phone. I’d much rather get together in person. I’ll always respond to a text or email, pretty much right away. I love it when someone sends me a message asking me to go to lunch. While I try to space these lunches out a bit, I will always find the time.

Sometimes, just a quick “hi” can mean a lot because it says your friend is thinking about you. I think about my friends all the time, but rarely take the time to let them know. I know I should do better.

When you leave your job, you wonder if anyone will remember you. You hope you left your mark in a positive way and that sometimes, someone thinks about you and says “I sure miss her. I need to keep in touch”.

If that’s you, don’t just think about it. Do it. Keep in touch.

4 thoughts on “Keeping in Touch”