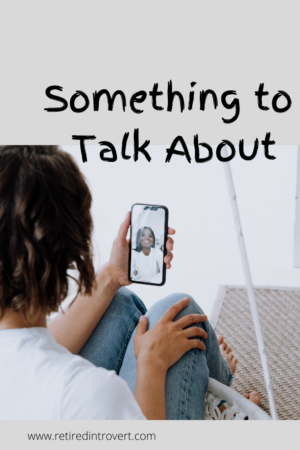 I mentioned in the post about my mom that my family has never been one to talk on a regular basis. I’ve always been amazed when I hear about people who talk to their parents or kids every day. What do you talk about?

Since my dad moved into assisted living early last May, I’ve talked to him every day. Yes, every day.

Even when I did call my parents’ house, if my dad answered the phone, he’d say a few words and then give the phone to my mom. So, going from that to every day? It’s been interesting.

Two things have led to this. First, he has never lived alone. Second, COVID made living alone feel even more alone. So my sister and I decided we should talk to him every day. It’s not like we have to worry about his safety. There are people in and out of his apartment every day. Our focus, I guess, is making sure he talks to someone he knows every day.

My sister was still working at the time, so she would call in the early evening, around 6:30. I called in the afternoon around 2:00. Even though she retired last September, we still follow this routine. Sometimes we switch, when she sees him during the day or I have something else going on. It’s been easy, given I hardly leave the house. I am starting to wonder how things might change when our lives return to something more normal.

It’s challenging coming up with things to talk about every day. At least for me. I’m not chatty. With anyone. I’ll tell you what we do talk about and then maybe you could provide some suggestions?

If you know my dad, you know he’s a sports lover. For the first three months, there were no sports. We made sure to get him the sports package for his TV, but there was nothing to watch. And that means, nothing to talk about.

But once baseball started in the late summer, it helped a lot. He had something to watch as well as something we could discuss. I like baseball but don’t follow it as closely as I could. Tim feeds me little tidbits that help me sound like I know what I’m talking about. My dad only likes to watch a few teams, saying he doesn’t know many guys on the other teams. I told him, that’s how you get to know them.

Then basketball started and is about to end. We talked a lot about the Hawkeyes and their high hopes for the year. He’ll ask me questions like, how tall is Wieskamp? Since I’m sitting right by my laptop when I call him, I check things out. I look up all kinds of things while we talk so I can give him information. He always asks how I do it, I explain it, but then he never remembers when he wants to do it himself.

It just so happens that we both have construction projects going on outside our windows. So, we talk about what the workers are doing every day. One day, I snapped a picture while we were talking. Oh, did I mention that we use FaceTime? I can’t say he’s mastered it, but he can handle the basics. I like being able to see him and I hope he likes seeing me too.

Anyway, here are pictures of what he sees and what I see. These were both taken about the end of January.

As you might expect, there’s been quite a bit of progress made in the last two months since these pictures were taken. Although, I’m surprised, as it appears much more construction happens during the winter than I expected. Both of these buildings now have windows, siding and shingles.

My dad sang in a quartet that won the international seniors contest in 1998. Because of that, they traveled all over the country to sing in barbershop shows. It was one of the best times of his life and he has lots of good memories. So, he talks about all the big time quartets and the guys he knows, as well as his own experiences throughout the years. It’s amazing how he can remember all the names, the cities, etc. but he can’t tell me what he had for lunch.

One of his quartet friends will tell him if something barbershop related is on YouTube and while my dad can’t seem to master it, I am able to bring things up for him. It was really tough before we could visit him. I’d get to it on my laptop and then flip my camera so he could watch it.

We lived in Webster City from 1958 to 1972. My dad and I were especially heartbroken when we had to leave because of his job. We talk about our old neighbors and one day, I even brought up a picture of our old street. Memories are very fuzzy at times and it’s funny what each of us remembers.

One day, I got an email from church about a death. It turned out to be the son of our old next door neighbors. Such a small world. I knew my dad would be interested in it.

Names of people I’d completely forgotten about will come up and it brings back all kinds of memories.

I am in charge of all the bill paying, etc. but I want everything to be very transparent. Understandably, he wants to be able to monitor his checking account balance. We tried to set him up (again, this was remotely) and we couldn’t get it to work. He needed his “security word” which of course, he didn’t remember.

Since I am on his checking account, I was able to set up my own online account. Even when I called the bank for help, they said to just have him use my online account. (Remember my post about cybersecurity?) Anyway, that works pretty well. The only complication is that periodically, they want to send a code for verification. I had listed my phone number as the primary contact, so my phone was always at the top of the list and he couldn’t seem to understand (even though I created written instructions) that he could scroll down and pick his phone. So I would get these text messages out of the blue with verification codes. I can’t tell you how many times we spent our daily calls with me trying to instruct him.

I finally updated the contacts so his phone now appears at the top of the list. Now if we can just get him to understand how text messages work!!

This is tough, given neither of us is doing much outside of the house. I tell him about my cardmaking but I don’t think he really understands. I told him one day we’d gone to AllSpice (where we buy herbs, spices and olive oil) and I think he thought I said something about Old Spice. Today, I mentioned we have a duck nest on the east side of our house. Last summer, we had a cardinal nest in our clematis. Every little thing becomes a conversation tidbit.

There are days when I wonder if we should continue doing this. I even think he might wonder the same thing even though I haven’t asked him. But then I think about this quote and decide, it needs to be done.

OK, any suggestions for topics?

12 thoughts on “Something to Talk About”