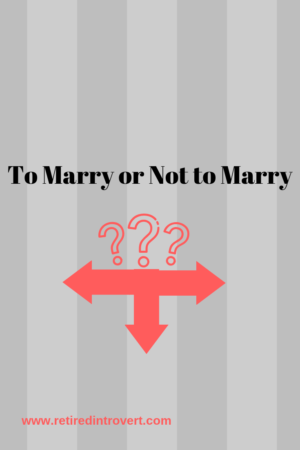 As Tim and I celebrated our third wedding anniversary this week, I thought about why getting married was important to us.  At our age, it would be easy to forego the marriage process and simply live together.  But getting married mattered to us.

I’m going to discuss three options for couples.  And even though these can apply to any age, I’m writing about them in the context of people who are older.  I’ll also explain why we chose to marry vs. not marrying.

I love diagrams to help explain something so instead of simply listing the characteristics of the three options I’ve identified, here is a Venn diagram to illustrate which are shared and which are unique to each one.

You may agree or disagree, either with the three options I’ve identified or the characteristics of each, but these are what I came up with.  If you think I’ve gotten it all wrong or missed something, let me know.

I know couples in each of these situations.  You have to choose what works for you.  That can depend on a lot of things, and at an older age, there are more things to consider.

This option is becoming more popular as people age.  Couples are generally looking for companionship (which you’ve noticed I’ve identified as the only characteristic common across all three options) and this is the easiest way to achieve that without making drastic changes.

Neither has to give up his/her house and can still have plenty of independence and his/her own space.  It doesn’t mean they aren’t committed to each other in some ways.  In many cases, they are still the ones that take care of each other when health issues arise.  But there are no strings and it’s easier to sever these relationships.

These relationships may not be recognized as being a committed couple, especially by family members.   In some cases, when a partner wants to step in and have a say, they’ve been pushed out by family members.  Or the family makes a decision without even consulting the partner.

Some couples choose to live together without getting married.  On the surface, they don’t appear to be any different from a married couple.  Most will say they don’t need a piece of paper to show their commitment.

But why not get married?  If it’s “just a piece of paper”, then what’s the big deal with getting it?

I like the way this blog post says “Living together lacks the emotional connection, the intimacy, and the sense of togetherness and oneness that marriage brings.  Knowing that you don’t love each other enough to get married, that one or both of you could walk away and be done with the whole relationship overnight, cannot possibly lead to the security or depth of feeling that marriage brings.”

Being able to share expenses certainly makes it a better financial option than living apart, but what about the long-term financial issues?  What happens if they split when one of them is covering most of those expenses?

What about benefits?  I know when I was working, if you lived with someone for a continuous six months, you could include him/her in your health coverage.  That’s a pretty good deal.

Are they each treated as a spouse by family and friends?  What are they called?  I know, labels don’t really matter but it can get awkward when you’re introducing your “other” to someone.

Some might think these arrangements automatically become a “common law” marriage.  In Iowa, to be in a common law marriage requires some very intentional actions.

According to Divorcenet.com, you don’t have to sign anything to become common law spouses, but if you want to prove to a court that you’re in a common law marriage, you have to both agree that you’re married (even though there’s no ceremony or license), live together without interruption where your relationship is marital in nature, and hold yourselves out as married.  This could mean designating each other as beneficiaries on insurance policies, filing joint tax returns, or commingling assets and debts by sharing banking and other financial accounts.

The advantages include the sharing of expenses, sharing the maintenance duties of owning a home, as well as the ease of spending time together.  And assets can be kept separate, which could be important for those with children.

For those of us that chose to get that “piece of paper”, it wasn’t about that.  It was about making a public commitment to each other.  It’s saying to each other and the world, I’m in this for the long haul.  It’s knowing we’ll always be here for each other, through thick and thin.  It’s becoming a real part of another family.

From the same blog post cited above:  “It’s a serious symbolic gesture you make to each other that elevates your relationship to the ultimate level – and that’s what people who call it “just a piece of paper” are afraid of.”   Marriage is something people who are truly in love aren’t afraid to do.

Sure, no marriage is guaranteed to last, but at least if you’re married, there’s a better chance you’ll try harder to make it last.

Tim and I never hesitated about getting married.  We both knew if we were going to spend our lives together, it would only be as a married couple.  We wanted to make that lifetime commitment.

You might say I’m a hypocrite since I chose to keep my maiden name when we married.  I’m not a feminist who thinks I would lose my identity otherwise.  I did it simply because of the hassle of changing your name.  I was still working, I had assets in my name, and I didn’t want to deal with the Social Security Administration!!  I figured at 59, changing my name wasn’t necessary.

Now it sounds like a weak reason to me and I sometimes wish I had changed my name.  I think it would demonstrate to Tim how important our marriage is to me.  It would also reduce the confusion that sometimes comes with our two different last names!!

Where do you stand?

I realize this is a touchy subject for many and there are strong opinions about all the options.  Everyone has to choose what’s right for them.  But for me, there’s no better feeling than being able to call Tim my husband.  ❤❤❤