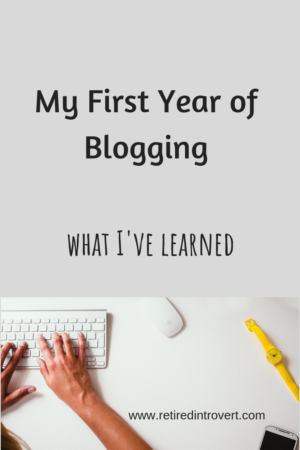 I can’t believe it’s been a year since I started my blog.  The time has gone by so quickly.  I remember that day the idea came into my head and I knew it was something I had to do. One year later, I have no regrets.

In celebration of my first year of blogging, I thought I’d share a few of the things I’ve learned.

But first – a big THANK YOU to all of you. Your support and encouragement means more than you will ever know.

I’ve always known it’s easier to write a lot than a little. Writing a lot is easy.  You just write down every thought running through your head.  But that isn’t always enjoyable to read and it’s not as memorable as a well written piece.

Writing less is trickier.  How do you say all those things with fewer words?  How do I share everything that matters to me?  What I’ve discovered is there’s always another blog for that.  So, I’ve worked very hard to be concise and stick to only that which is THE most important for a topic.

I didn’t realize how much time blogging would take.  Especially if I’m writing about something that includes facts (and sources) and pictures that need to be uploaded and sized.

As I’ve begun following other bloggers, mostly retirees like me, this has been a common theme.  Several have taken extended time off from blogging, simply to recharge and focus on other things in their lives.  I hope I never reach that point, but never say never, right?

That’s why I’ve settled on posting two times each week. For me, that’s very manageable, although I will admit it’s tough some weeks. I have no problem with topics; it’s finding the time to write, edit and proofread, as well as choose just the right picture for my featured image.

Won’t get too personal

There are many things I don’t write about, either because they’re too personal, would possibly hurt (or be misinterpreted by) someone I care about, or both.  While I sometimes use my blog as therapy, I have to draw the line when it comes to sharing too much.

I also choose not to write about anything controversial.  It doesn’t mean I don’t have opinions.  It just means that much of it is personal and not something I easily share.  While writing is much easier than talking for me, some topics are just too emotional to even write about.  And the last thing I want to do is start a debate.  No way.

As with any technology, things don’t always work the way they’re supposed to.  I use plugins that all of a sudden stop working.  It’s not easy finding the right combination of theme and plugins that work nicely together.

Developers are constantly updating their plugins.  And evidently, plugins can conflict with each other, as well as with a website’s theme.

Technology is always frustrating.  Unfortunately, earlier this year I had a problem I couldn’t ignore.  I had what the techies called the “white screen of death” with website.  Something was seriously messed up after I updated a plugin and I needed paid support to fix it.

Getting more readers is tough

While I love that my friends and family enjoy my blog, I kind of wish I could appeal to people beyond that group.  But I’ll also admit, I probably haven’t tried hard enough.

In September, I tried getting more of my Facebook friends as followers, with a goal of reaching 100 likes on my Retired Introvert Facebook page. Well, that was a bomb. (But thanks to those of you that did become followers. ❤)

I currently have 81 followers and I have picked up some that are friends or relatives of friends, so I’m getting noticed a little bit beyond my circle of friends. I have 58 people subscribed to get emails and 5 people have unsubscribed over the past year. But I know some have chosen to catch my posts through Facebook only, which is just fine.

To get more followers, I might have to focus and blog about something more specific.  But I hope you like that I write about a variety of things.  That’s what my life is and that’s what I want to share.  You’re getting the real Retired Introvert.  And that’s all that ultimately matters!!

As I think about my goals for 2019, I’ve decided the number of readers/followers I have isn’t that critical to my success.  At least not enough that I’m willing to spend even more time and/or money than I already do.  I’m going with the status quo and just keep doing what I’m doing.

I’ve already renewed my website and what I need to manage it, so I’m good for at least another year. I’ll see what this year brings and then decide if I should change anything.

If there’s anything you’d like me to write about, please let me know. I’m even open to doing research if there’s a topic you’re interested in learning about.

So here’s to my first year of blogging.  🥂

And hopefully, many more to come!!

8 thoughts on “My First Year of Blogging”