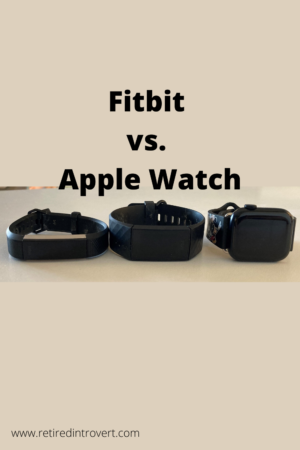 I am always late to adopt new technology. Mostly because I’m a cheapskate and don’t want to spend the money.

I got my first Fitbit about four years ago, only because it was a special price on Amazon’s Prime Day. It was an Alta HR model. Definitely not top of the line, but it captured my sleeping patterns which I was interested in. I lost my first one due to a faulty band. It ended up somewhere between Florida and here, as it fell off my wrist on our trip home after vacation.

I loved that Fitbit so after having it for less than a year, I got another one just like it. It wasn’t as good, however, and would not always capture my sleep information. It was frustrating. I ended up replacing it with a Fitbit Charge 4 in February 2021, which captured essentially the same information but it also would randomly skip nights of sleep.

Then in early November, Tim decided we should get ourselves Apple Watches for each other for Christmas. I think it was mostly because he wanted one but he also knew there were issues with my Fitbit. I agreed and he did some research and found what he thought we should have. Of course, his model was available right away in our Apple Store, but mine had to be shipped and wouldn’t get here until the end of November. It gave him time to figure everything out before I got mine!!

So, now that I’ve had my Apple Watch for 3+ months, how does it compare to my Fitbits? I’ll break the comparison into categories.

All of my Fitbits had black faces and came with black bands. But I could buy replacement bands in all kinds of colors pretty cheaply. So, I had a lot of different colors and liked to change my bands often, depending on what I was wearing. It made it seem more like an accessory.

I also wore my Fitbits on my right wrist, even though I’m right-handed. I still liked to wear a regular watch on my left wrist. Mostly because I consider my watches jewelry items, but also because it wasn’t always easy to read my Fitbit. More on that later.

My Apple Watch, however, can be customized with hundreds of different watch faces. They also can show various things in addition to the time, such as the outside temperature and your next calendar event. These are what show on the face I chose.

As you can see, I chose Minnie Mouse. What you can’t see is that she moves. She taps one of her feet and jiggles her hips. I learned by accident that she talks when you touch the face, which is actually kind of handy when you want to know the exact time. When you touch her first thing in the morning, she says “morning” too. Same with afternoon and evening. My granddaughter loves to touch Minnie!

It came with a black band or maybe really dark blue. I’m not sure which, but it’s called Midnight, so I’m guessing dark blue. The bands are higher quality and therefore, you can’t buy ten for $10 like I could for the Fitbits. I’ve only bought one new one and that was when we were at Disney World. I got a Mickey Mouse band, which I love. And it was $35. I’d like more, maybe one that’s a little dressier.

I started out wearing it on my right wrist like the Fitbits. But I soon learned that with so much being done with the knob on the right, I needed to use my right hand to move it. So, I gave in and moved it to my left wrist. It’s now become my 24/7 watch. But that’s OK, as I feel like I have a Minnie Mouse watch!!

As I mentioned above, my Fitbits weren’t always reliable when capturing sleep data. But when they did, I liked how it was presented. The sleep score was understandable and easy to compare from day to day. It showed the different types of sleep – REM, Light, Deep, and Awake – and the amount of time in each. Again, easy to understand. I didn’t choose the premium option, so I didn’t get information about restlessness or my sleeping heart rate. The app on my phone was easy to sync to and use.

Fitbit captured my exercise – number of minutes, average heart rate, and how much time I was in the “zone” (cardio or peak). I never did understand how I should interpret “peak”. I set a goal of walking 4 days a week and it kept track of my progress.

One thing I didn’t like at all about Fitbit was the fact I couldn’t read it outside in the daylight. That’s why it could never replace a watch for me. I’m outside enough that I need to be able to see it.

I think I’m only beginning to discover the functionality of my Apple Watch. One thing I learned in Florida was I could still use the Map My Walk app without having my phone with me. The first time I walked, I had both and realized they were syncing. Then I noticed the app was appearing on my watch. Now I can start the app on my watch without my phone. I love it!!

I did pay to get more functionality with the Sleep Watch app. It’s not the same as Fitbit’s app, but it does capture some good information. I get a sleep score, but I have no idea how it’s calculated.

I’ve become so used to seeing what the temperature is with my watch, I think I’d be lost without it. It’s supposed to buzz or vibrate when I get a call or text message, but it doesn’t always do that. And when I’m wearing my watch, my phone doesn’t notify me either. As a result, I miss some text messages and only discover them when I finally pick up my phone.

I’m inclined to say, you get what you pay for. The Apple Watch definitely has more functionality than the Fitbit models I’ve had. I’m sure I could find a Fitbit that does a lot more. But I do like the linkage between my phone and watch. While I say I miss some text messages, there are also some I get through my watch that I might not have known about until much later.

For me, the big negative about the Apple Watch is the battery. I could go several days, maybe up to five, before needing to charge my Fitbit. I have to charge my Apple Watch at least once a day, sometimes twice. The Sleep Watch app requires at least 45% power to work at night, so I always have to check it before I go to bed. I’d say most days, I’m charging it both morning and night.

I like that I can take my ECG on my Apple Watch, as well as check my heart rate and blood oxygen level. Not that I worry about any of those, but it’s kind of nice to know. I do find the Time to Stand notification a little annoying, but I think I could probably turn that off. There are other apps from my phone that I can use too.

I think if you want minimal tracking, Fitbit is a great option. But if you like compatibility with your iPhone as well as increased functionality, I’d go with Apple Watch.

I think I’ll keep my watch!!

6 thoughts on “Fitbit vs. Apple Watch”