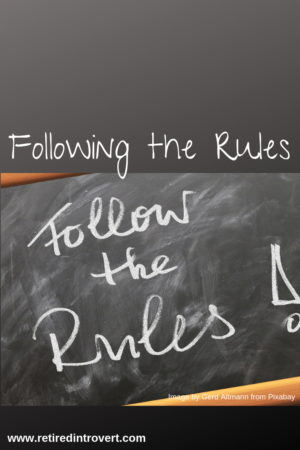 Once, when I  went to the Post Office to pick up a package, I parked my car and as I was walking to the building, a man drove by and parked his car in a space clearly marked (there were three signs) – No Parking, Fire Lane.

At first, I thought maybe he worked for the Post Office.  But once inside, he got in the same line I was in.  I guess he thought because he put on his emergency flashers it was OK to park there?

There were plenty of parking spots and he might have had to take ten more steps to get to the building.  He was clearly capable of taking those extra steps.

Shortly after I got to my car, he came out and drove away.  So, why did he think it was OK to park there?  Maybe he can’t read?  No, I think for some reason, he didn’t think the rule applied to him.  How about you when it comes to rules?

Of course, we all need to follow the rules that are laws.  And technically, where this man parked was governed by a law.  Could there have been some other reason he needed to park there?  Something I wouldn’t know or see?  Possibly.  I still think it’s a matter of people doing whatever they want to do, if they think they can get away with it. So many people these days think they’re special and the rules don’t apply to them.

I know I sometimes speed, but my own “rule” about that is to never go more than five miles over the speed limit.  I am pretty consistent with that, but there are times when I might go a little faster.  Is it ever OK to break this rule?

What about those things that aren’t technically laws, but are unwritten rules of courtesy?  You know, things like not cutting in line.  I’ve done that accidentally before when I didn’t realize there was a line.  But I felt terrible once I knew what I’d done.  Not everyone feels terrible, though.

Have you ever been driving and noticed way up ahead your lane was closed?  I plan ahead and get over in plenty of time.  This often means it takes more time, but isn’t that the right thing to do?  Don’t you growl at the person who ignores the signs, continues down the lane that’s closing, and then expects someone to let him in?  Grrr.

I have an opinion about turn signals.  Yes, a lot of people don’t use them when they should.  But I’d say more use them when they don’t need to.  For example, they don’t use their signal when they’re moving to the turn lane, but do put it on once they’re in the lane.  At that point, I’m pretty sure I know you’re turning.  It would have been more helpful to know you were changing lanes.

Why am I a rule follower?

I’ve tried to determine why I always try to follow the rules.  Is it a common introvert trait?  I don’t think it can be linked to that, although some of it could be due to not wanting to draw attention to myself, which is definitely indicative of introversion.

Is it because I’m a first born?  Maybe, but I also know other first-borns who aren’t as rigid as I am, as well as second and third borns who are more like me.

When I completed the “Now, Discover Your Strengths” exercise years ago, two of my strengths were Responsibility and Harmony.  Hmm, that seems to say a lot, doesn’t it?  But can these strengths be tied to my introversion and birth order?  Maybe.  It’s hard not to think it must all be related in some way.

Other examples of “rule” following

I realize some directives are more guidelines than actual rules, but I always assume they’re mentioned for a reason. Here are some examples where I follow the rules.

Do you have any rules for yourself? They might be kind of stupid but they’re something you try to live by? For instance, my rule is to finish a book I start, even if I don’t like it. Usually this isn’t tough for me, but I will admit, there is one book I’ve never finished.

I probably need more rules for my hobbies. I think, “I’ll just buy this one pattern or this one piece of fabric and then I won’t need anything for another month.” But you know what? I end up seeing something I like on Instagram and I HAVE to have it – and now!! I can be a little like this with books too. When it comes to my hobbies, I am a bit of a collector. 😏

All right, I know I don’t follow every rule. I might just bend a few from time to time!!

I believe in rules. Sure I do. If there weren’t any rules, how could you break them?

10 thoughts on “Following the Rules”