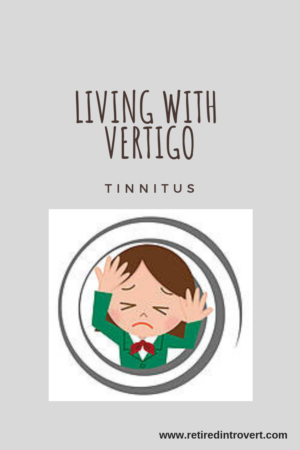 I can’t really say my vertigo and tinnitus are related but I also don’t think they’re mutually exclusive. Since tinnitus is a common symptom of Meniere’s disease, it makes sense. However, I also know there are a lot of people out there with tinnitus who don’t suffer from Meniere’s disease.

What is tinnitus? (Source: Mayo Clinic)

I think a lot of people have this and don’t know it has a name. Tinnitus is the perception of noise or ringing in the ear. Did you know it affects 15-20 percent of people? That’s more than I would have expected. (Maybe I should do a survey of all of you to see if we support that statistic!!)

Its pronunciation makes tinnitus even more confusing as there are two accepted ways of saying it. The British and healthcare professional pronunciation tends to sound like “TIN-ni-tus.” While the American and layperson pronunciation often sounds like “ti-night-tus” or “tin-NYE-tus.”

Tinnitus isn’t a condition itself; it’s a symptom of an underlying condition such as age-related hearing loss, an ear injury, or a circulatory disorder. It isn’t usually a sign of something serious but it can be very bothersome.

It’s the sound in your ear when there’s no external sound. This phantom noise may vary in pitch from a low roar to a high squeal, and you may hear it in one or both ears. In some cases, the sound can be so loud it can interfere with your ability to concentrate or hear external sound. Tinnitus may be present all the time, or it may come and go.

If you want to learn more about what can cause tinnitus, click on the Mayo Clinic link above.

I think mine started before I even realized it. I can remember sitting in bed at night reading and thinking I heard a loud truck outside. If I’d get up to check, there was no truck.

But then it became worse and there was no denying the noise in my right ear. To me, it sounds like constant white noise, although I will also hear high pitch sounds at times. Mine was also accompanied by sudden hearing loss in that ear. (If you’re new to my blog, you might want to read my first post in the Living with Vertigo series for more background.)

No one could explain either the hearing loss or the tinnitus and I just lived with it. Then when at the end of 2015 I began having episodes of spontaneous vertigo, the doctors first assumed it was Meniere’s. While I’ve never had a definitive diagnosis, I am being treated for Meniere’s and the treatment appears to be working. It hasn’t eliminated the tinnitus, however.

What can you do?

If your tinnitus is more than just a nuisance, see your doctor. It’s important to diagnose the underlying condition. You may find, however, that like me, there is no easy diagnosis. I’ve been told multiple times that issues with the ear are tough to determine because they can’t see what’s going on, except through an autopsy. I’m pretty sure I won’t care at that point!!

I did have a head MRI to rule out a benign tumor. That was about a year before the vertigo began. No tumor.

My primary doctor suggested I get a hearing aid as that can lessen the noise. I can definitely say it makes a difference for me. Over the years, the hearing in my right ear has gotten so bad that the hearing aid does virtually nothing to help me hear better. But I wear it every day because it calms the noise in my ear.

Over time, I’ve reached the point where I don’t always hear it. Sure, when it’s quiet I’m more likely to notice. I’m sure any of you with tinnitus yourselves are irritated by it when you go to bed.

The key is not to think about it. I know, easier said than done. You almost have to train your brain. That’s how I’ve survived over the years and there are nights when I don’t notice it at all.

If I’ve been to a loud concert, my tinnitus becomes noticeably worse. I don’t know if the loud noise irritates my inner ear and that’s why it’s worse. Those nights I know I will hear it when I go to bed. But as always, I have trained myself to essentially not hear it. Or at least, not let it dominate me.

Can I make it go away?

Unless treatment of the underlying cause works, there’s really nothing to be done. Some medications have been prescribed but I’m not sure they are effective enough to be considered a cure.

About the only thing to do is learn how to live with it. I don’t know if the hearing aid option works for everyone, but it might be worth checking into.

Do I like wearing a hearing aid? No. All I know is, once it’s in my ear, the noise recedes. It’s not gone; it’s just barely there. For me, that’s worth the cost and the nuisance.

This is just another of life’s little pleasures you learn to live with. There could be worse things, I know. I’m thankful this is something I’ve learned to live with.

Any of you deal with tinnitus? If so, what’s your coping mechanism?

4 thoughts on “Living with Vertigo – Tinnitus”