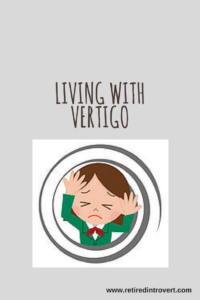 I wasn’t going to talk about this, although Tim thinks it’s a perfect subject for my blog.  And then I had a bad episode on Sunday, and decided I needed to get this out.  Whenever I hear the beginning of a commercial for fibromyalgia, which says “to everyone else, I look like everyone else”, I think of myself.  Very few people know what I’m experiencing.  And honestly, I don’t like to dwell on it.  I’m not sure it makes me feel better to talk about it; in fact, sometimes it makes me feel worse.

I’ve been experiencing spontaneous vertigo for two years now.  It started four months before I was scheduled to retire.  Great timing, huh?  The vertigo itself is bad enough, but not knowing when it will hit is the worst.  And it comes in different intensities; some very minor and some very debilitating.  I’ve tried lots of different things.  I started by seeing an ENT and taking steroids (for a short time) and a diuretic.  Because I also had sudden hearing loss in my right ear (although that was over 10 years ago), he suspected Meniere’s disease.  But I didn’t have all the symptoms, so he wasn’t confident in his diagnosis.  He gave me valium to take when a spell hit, but that did nothing.

I lived with the uncertainty throughout my last four months of work.  Fortunately, I was able to work from home whenever I felt I needed to.  Over those months, I was very anxious and unsure as to what I should do (and not do).  It’s very embarrassing to have this happen in front of others, and everywhere I went, I thought about what I would do if a spell hit.  It definitely took the enjoyment out of my life for a while.

After retirement, I slowly got some confidence back.  However, I limited my driving and still will not drive alone on the interstate, and I prefer not to go anywhere far by myself.  Fortunately, Tim likes to drive and is so good about taking me places on his days off.

It seems, however, that once I get confident and feel OK, a vertigo spell hits me.  So then I’m back in my shell and pretty much afraid to go anywhere.

A chiropractor that treats vertigo

After about nine months of this, my mom sent me a link to a chiropractor’s site, where he claimed he could help with vertigo.  I was somewhat skeptical, as his material mostly referred to problems that surface as a result of a head injury.  I don’t recall having had anything like that; at least not severe enough that I thought could bring on the vertigo.  But nothing was working.  I wasn’t having spells often, but that didn’t remove my uneasiness.  This chiropractor was at least 45 miles away, and given I wasn’t driving very far, I didn’t feel seeing him was a viable option.

I searched and found there is another chiropractor closer to home who specializes in the same thing.  These chiropractors deal specifically with the atlas bone in the upper spine.  They don’t twist and crack your body, like you think of with a typical chiropractor.  They use special equipment when the atlas is out of alignment that I’d describe as vibrating it back in place.  I decided to give her a try.

She initially took x-rays to determine if my atlas was out of alignment and it was.  This helped her know what she needed to do.  I went a couple of times a week at first, and then tapered off after the alignment started to hold.  I’d heard from someone else that it could take a year to see results.  I still see her and it’s been about 15 months since I started.  In fact, I was there yesterday.  My current problem is less about the atlas and more about the tight muscles in my upper back.  If my atlas feels off to her, she works on those muscles and that gets in back in.

Honestly, I don’t know if this has made any difference.  Sometimes, I wondered if it was making things worse, as I had some bad spells afterwards.  But with nothing to lose, I’ve kept going.

A trip to Mayo Clinic

After a particularly bad spell last May (I spent two days in bed), I asked my doctor for a referral to Mayo.  It’s close and I’d heard so many good reports from those who’d gone there for help.  It took five months to get in, but they agreed to see me.  Funny though, all during that waiting time, I’d gone without vertigo for six months!!   (Note:  I seem to be better in the summer.)  And then one night in November, right after going to bed and two weeks before the planned Mayo visit, vertigo hit.  I spent two hours on the bathroom floor, waiting for the nausea to subside.  And then one week later, a milder spell.  Sleeping is critical after a spell.  It’s not unusual for me to be in bed for four hours during and after the vertigo.

I’ve often felt that anxiety sets it off.  It’s not that I feel noticeably anxious, but I do start thinking about what I’m doing and where I’ll be going, and I believe my body feels a sense of dread.  I seem to be fine (mostly) doing these outside activities, but either a little before or after, I have a vertigo spell.  I wonder if I was anxious about going to Mayo.  I know I was anxious about going to the dentist, as I’d experienced the “two days in bed” spell the last time I went.  It makes me so mad sometimes.  I have never hated going to the dentist.

The Mayo experience was good, although I can’t say I yet have a definitive diagnosis.  The doctor said it could be one of two things (and possibly a combination):  Meniere’s disease and vestibular migraine.  But they are treated very differently.  I chose to start by treating the Meniere’s.  There are many levels of aggressiveness in treatment.  I went with the least aggressive, which is taking medication three times a day.  It’s a medicine that’s used extensively in Europe but is not FDA approved, so I can only get it through the Mayo pharmacy.  It’s so hard to know if it’s making a difference.  I was leaning towards thinking I was having mild success with it, until Sunday.  Now I’m not so sure.

I honestly don’t know what to do next.  I can go back to Mayo and try something more aggressive.  The most aggressive option (surgery) would definitely take care of the vertigo, but I’m not sure what else it would do to my balance.  I know it would eliminate any hearing in that ear, but it’s so bad now, I don’t consider that much of a risk.  I’m kind of leaning in that direction, because what’s the point of trying something that isn’t 100% successful, when you’ll be anxious about it forever.  There are things I want to do and I’ve lost a lot of my independence.

After Sunday’s spell, I’ve had a couple of down days.  I felt very depressed yesterday, as I had appointments I had to keep, and I was on my own.  As usual, once I’m home again I feel better.  But all throughout the day, I would think about it and feel sad.  I know there are many others whose lives are far worse than mine.  I remind myself of that daily.  I have mostly good days, and so many things to keep me busy at home.  I have wonderful friends who will pick me up in order to spend time with me or they will meet me somewhere close to my home.  I have the greatest husband who is patient but also tries to push me a little by getting me out of the house when he thinks I need something to perk me up.

I allow myself a few days to wallow and then I know I’ll bounce back.  But it will never leave my head.

9 thoughts on “Living with Vertigo”