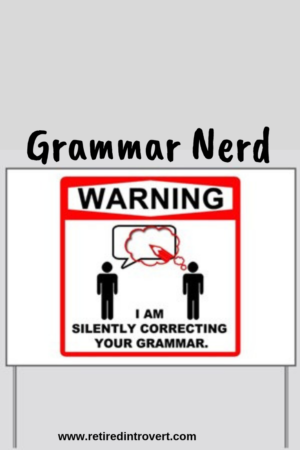 Hi. My name is Linda and I’m a grammar nerd.

Having said that, I am not perfect and will make mistakes myself. But I cringe just as much when I make them as when others do. (Keep reading and I’ll share my bad habits.)

I’m not an English major so I have no formal training. I sometimes wonder if I’m sensitive to grammar (and spelling) mistakes because I’ve always read a lot. And evidently, introverts have been shown to be more prone to catching these mistakes than others. It seems it’s due to these mistakes disrupting our flow and creating a distraction, which is not something our introvert brains like.

I’ve bought several grammar books over the years and used them at work. I admit though, it was mostly to check on something when I heard someone else say something that didn’t sound quite right. But I swear, I just wanted to know the right way to say it!!

One thing social media, email, and texting have highlighted is how many people don’t know the correct spelling for common words. You know, things like there/their/they’re or your/you’re? I also see so many people write “to” when they should write “too”.

And don’t get me started on plurals and punctuation. It’s become common now for every word that ends with an “s” to be preceded with an apostrophe. I see this all over, even on signs!!

One trend I’ve noticed for several years now, and to me is like fingernails on a blackboard, are phrases like “needs washed”. When did we get so lazy that we excluded the “to be” part of that? If you don’t want to say “needs to be washed”, then say “needs washing” instead. At least when you’re around me. 😉

What I’ve learned is that this type of phrasing is regional and completely acceptable in certain parts of the country. Well, let’s say, it’s been allowed to become acceptable. I still think it’s bad English. And Grammar Girl says it should not be used.

The other thing I hear ALL THE TIME is someone saying “went” when it should be “gone”. Doesn’t hearing “should have went” hurt your ears? It does mine.

We don’t always get along. They, of course, would like me to purchase the premium version, but I think I’d end up throwing my laptop across the room if I did that. It makes me mad when it tries to correct me before I’ve even had a chance to catch a mistake (usually a typo) myself.

Each week, I get a report from Grammarly, letting me know how I did the previous week in terms of productivity, mastery, and vocabulary. They also keep track of my writing streak, telling me how many weeks in a row I’ve written. Last week, I was legendary. 🤔

Productivity is stated in terms of how much more I wrote than other users. This is typically high, currently averaging around 88%, but I’ve been as high as 98%!!! Am I too wordy?

Mastery is my weak area. This is an indication of accuracy. I’m only an average 49% more accurate than others, with my lowest week at 18%. Oh my. And you know what my weakness is? Commas. This is where Grammarly and I have a major disagreement.

I think of my blog as a conversation, which means I insert commas in places I would pause if I were talking. Doesn’t that make sense? Not to Grammarly evidently. Oh well, it’s not going to change how I write. Is that a bad attitude?

And just so you know, Grammarly didn’t like my use of the word “went” up above, so I’m sure I’ll get hit this week on mastery.

And finally, my vocabulary ranks up there with my productivity. I’m averaging 87% more unique words than other Grammarly users. My highest week was 97%. And I don’t think my vocabulary is that great. Do I use words that are hard to understand?

However, I am grateful for spell check, especially for those tough words like occasionally, when I never seem to remember if there are two c’s or two s’s. Ooh, I hope I used the apostrophe correctly!!

As I’ve started reading more blogs by others, I find I’m noticing mistakes. I choose to believe it’s for a lack of proofreading, because they often appear to be the careless types. I do a LOT of proofreading before I publish anything and I do catch things. But, I’m not immune to missing something either.

OK, one thing I’ve noticed myself doing is saying “there’s” when I should be saying “there are”. We all do this, I assume because it’s faster and easier to say? I’m trying to catch myself before I speak, but I don’t always. It just comes out.

I’ve already mentioned I have a problem with commas. Usually, it’s too many, but in one case, I don’t use one when I should. The one I seem to mess up is called the Oxford Comma, and since it’s considered a style thing, I’m not sure it’s truly a mistake. There are all kinds of opinions about its usage.

However, not using it can sometimes create a misunderstanding. For instance, have you heard of the book “Eats, Shoots & Leaves”?

Anyone want to chime in and tell me where my grammar is poor?

Once when I was in Kauai, there was a great bad sign posted outside of Jo Jo’s shave ice. It was a seating area and the sign said: “please distinguish your cigarettes”. Hmmm.

I’ve even noticed all the mistakes in the newspaper. Not just typos but serious grammar errors. Makes me wonder what’s being taught in school these days.

What is your grammar pet peeve?