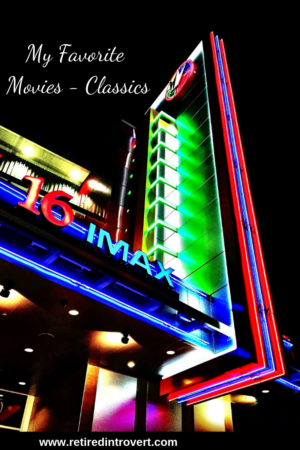 Can you imagine your life without movies? Movies are entertaining, educational and most of all, an escape. Is there anything better than sitting in a dark theater (with popcorn, of course) and losing yourself in a good movie?

Why do you think they continue to build new theaters????

It doesn’t matter if it’s an action movie, a drama or a comedy. Movies provide us with a way to possibly imagine our lives differently. Or to be amazed by the special effects and the power to see the future or the past.

I’m sure we all have our own list of favorites. You know, those movies you can watch again and again. Maybe you can quote them word for word?

Some of my favorites

As I’ve considered my list of favorites, I thought it best to categorize them and present them in installments. Maybe you don’t care about the movies I like. Or maybe this will spark your memory of, or inspire you to watch, one of these.

I’m not sure what qualifies as a “classic”. These were all made before I was born and are still around today. So, I doubt my list is unique. There’s a reason these are classics, right?

How did I come up with these movies? They’ve all touched something in me. Each is a good memory and a great story. They are in no particular order, so don’t make any assumptions about what I do or don’t like best.

Splendor in the Grass

I first saw this movie when I was babysitting, so probably when I was a sophomore in high school. It was when they used to show late night movies on the few stations we had to watch. I fell in love with it, and not because of Warren Beatty. It was so heartbreaking. Some might think it had a happy ending; I do not.

Maybe it touched me because I was about the age of the characters in the movie. It was so hard to watch them suffer because they were expected to do what was considered “right” and not express what they felt. It showed it’s tough being a teenager no matter what decade you’re in.

I’ve always loved this quote from the movie and intend to do something with it someday. Maybe cross stitch it?

Though nothing can bring back the hour of splendor in the grass, of glory in the flower; we will grieve not, rather find strength in what remains behind.

William Wordsworth from Ode on Imitations of Immortality

The Best Years of Our Lives

I first saw this movie on either a Saturday or Sunday afternoon at my friend Nickie’s house. I’m betting she doesn’t remember it. We might have been in junior high but it could have been even earlier than that.

I can still see myself laying on her living room floor and being enthralled with this movie. It’s a long one, so we were there all afternoon.

I asked for the DVD of this movie (and Splendor in the Grass) for Christmas, and Tim and I finally watched this a few weekends ago. I should have told him before we started that it was almost three hours long!! But it was the kind of day you wanted to hunker down and watch a good movie.

This movie won a Best Picture Oscar in 1947. It also won seven other Academy Awards. It focused on three WWII veterans after the war and starred an actual veteran who lost both hands in the war. I think it was my first exposure to the realities of war. I’ve never forgotten it. It was as good as I’d remembered.

This is probably one everyone might pick. I first saw this in the early 1980s. I assume it was around Christmas but I can’t remember for sure. I can see myself sitting in my living room watching it. I cried and cried at the end. I’ve seen it many times since, and I still tear up.

It didn’t become a popular Christmas movie until 1976, which is probably why I’d never seen or heard of it until I did. Since then, it’s been a little overplayed, so I think it’s lost its impact, which is too bad because it provides a lesson for all of us.

I don’t think this movie has to be considered a Christmas movie, simply because it starts and ends on Christmas Eve. Most of the movie has nothing to do with Christmas and the plot isn’t holiday oriented. But we still watch it every Christmas.

Gone With the Wind

I first saw this on TV when I was a kid but did actually see it in a theater, maybe when I was college age. It’s the first movie I remember having an intermission. Does that ever happen now?

This one doesn’t end the way I wish it did. Scarlett and Rhett just don’t communicate well enough to understand what they each really want, since they’re both too stubborn and prideful. I guess that’s what makes the story but I do find it frustrating at times.

This isn’t on TV as much as it used to be but when it is, I always try to watch at least part of it. I don’t have the DVD for this; maybe this is the one I need to buy next.

Does anyone not like this movie? OK, maybe my dad.

I remember going to the neighbor’s house when I was a kid because they had a color TV and we could see how everything became colorful when she landed in Oz. Before that, it was all black and white for us. (Side note: we didn’t get a color TV until I was a junior in college. I swear we were the last ones in the world.)

I do not have a DVD of this one either. It’s just too easy to catch it on TV and I usually watch it while I’m doing other things around the house so the commercials don’t bother me.

The big question is: was it real or just a dream? I guess it doesn’t matter, since she learned the lesson “there’s no place like home”.

To Kill a Mockingbird

I’ve also read the book and in this case, I’d have to say the movie is just as good as the book. I don’t have the DVD for this one and I really should because I can’t remember the last time it was on TV. And it doesn’t appear to be available through Netflix.

Everyone needs to watch this movie. It makes such a statement about racial biases in the time of the Depression.

What about you? Do any of these make your list of favorites? What classics would you suggest?

9 thoughts on “My Favorite Movies – Classics”