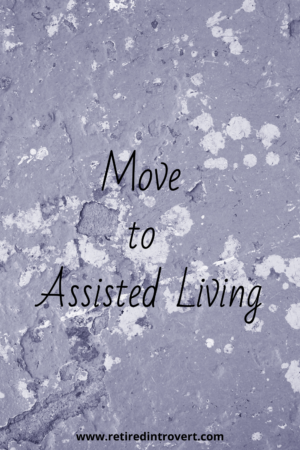 It’s been an emotional week. I suppose moving your parents to assisted living would be tough no matter when or how you do it. But under these circumstances, it’s very difficult.

First, it wasn’t their decision. Things could have been so much easier if it was something they’d decided to do and planned for. We could have systematically chosen what to take and how to handle everything else. They could have started living there when they were both still mostly capable of taking care of themselves. And my mom may have avoided this last fall. But maybe it never happens that way.

Second, the COVID-19 restrictions have been a hassle. Initially, because absolutely no one was allowed inside, we could only bring so much of their stuff. We had to pare down which pieces of furniture we could bring.

The moving process – their stuff

The day before the move, however, we learned they would allow two people to assist with the move. For us, that had to be the movers because there was no way we were going to get even a pared down version of their belongings up to their apartment. It’s not like any of us are spring chickens ourselves!!

We asked if that meant we could bring all of the stuff we’d planned, since the movers would be handling it instead of the facility’s staff. We were given the OK, so we had to make a quick shift in plans. Fortunately, we had already decided what we thought they would want. It’s tough taking a 3400 square foot house full of stuff and fitting it into a space under 1000 square feet.

There are no pictures for the walls, only those that can sit on a table. We aren’t able to go to their apartment so we have to rely on the staff there to make sure everything is unpacked and the furniture is set up properly. My sister had drawn a floor plan for the movers, but they had to make a few changes once they got up there and realized where the TV hookups were. We thought we knew that, but evidently we had it backwards.

I’m the ultimate planner so I’d created a table that included all the “to-dos”, who would be responsible, and when each needed to be done. I told Tim I felt like I was back at work, as this was something I did a LOT as part of my job. I wanted to make sure we knew what we had to do, in what order, and who would be doing it.

The moving process – my parents

I had planned to pick up my mom at the care center around mid-afternoon. My dad wanted to go with me, so once everything was done and the movers paid, he and I took off to get her. They were waiting for us and the transfer went smoothly.

I don’t know if any of you have experience with care centers, but we lost a lot of my mom’s clothes along the way. Even when we were doing her laundry initially, things went missing. As we were loading her up, I asked about the two afghans she’d had in her room. All I got were blank looks. These were afghans I had made specifically for her, one many years ago and which she loved. How could they get lost??? I will be heartbroken if they aren’t found.

Once we got back to the assisted living facility, their nursing director came to help transport her/them to the room. It was so tough watching them go, knowing we couldn’t go with them or see them for the indefinite future. It was a good thing I was wearing a mask, although I guess that didn’t hide the tears in my eyes. It was like sending your kids off to camp for the first time.

Dealing with the changes

The last two and a half years have been tough on everyone, as we’ve dealt with my mom’s fall when she tried using a chair as a ladder, her cancer diagnosis, her knee replacement, and now the fall down the stairs.

But it’s been particularly tough on my dad. Not only has he had to deal with his own physical issues, but he’s had the stress of caring for and worrying about my mom. He’s been so focused on pleasing her that he’s let his own needs slide. And while she’s recognized his limitations, she has still demanded so much of him.

I’ve watched him age and it makes me so sad. He is almost 87 but he’s also been a strong guy who took care of everyone else. While he lived with us these past five plus weeks, I could really see just how much his body is failing him. And how he’s happy to let us take care of most everything.

He has trouble staying balanced and his legs are so weak. He has to hold on to something when he walks. However, he won’t use his cane. I feel bad but I also feel angry at times that he won’t accept his limitations and use these aids that will help him safely walk. I see other men with canes and walkers. No one thinks less of them.

Taking care of my dad

While it’s nice to have our house back to normal, I have to admit it was kind of fun having him here. He was absolutely no trouble and he fit right into our routine. Maybe the quarantine made that easier, because we certainly weren’t doing much anyway. Sure, we had to make a few adjustments, but we made those without skipping a beat.

Yes, we had to increase the TV volume. And we had to come up with gluten free meals but that’s become pretty simple. We gave up our bedroom but I got used to sleeping in the guest room. He and I shared the master bath, so I didn’t have to move all of my stuff, and I had to change my schedule a little bit.

I made coffee for him every morning, which meant pulling my old Mister Coffee out of its box. He and Tim played cribbage most days, sometimes even twice. But generally, we went about our days pretty much the same as we would have anyway. We aren’t very exciting, you see.

The care center staff helped my mom FaceTime with my dad almost every day, so he was at least able to see her. Those conversations were always interesting as she talked the whole time and you never knew what she was going to come up with.

I know he was very appreciative of our help and even though it could be frustrating at times, I kind of miss him now. He took over my upstairs recliner and I’ve yet to sit in it since he’s been gone. It seems like he should still be in it. The night before he left, it hit me that he’d be leaving and the tears flowed.

It’s far from over

I am so worried about him because my mom can be tough to handle right now. And they have to be quarantined in their apartment for 14 days due to the virus. That’s not easy for a confused person to understand or accept. Who knows even after that when the visiting restrictions will be lifted so we can see and help them. I’m sure my dad will be past needing a break!! I hope we did the right thing and didn’t move them in too soon.

These next few weeks could be the toughest yet. At least we knew my mom was doing OK at the care center and it was easy taking care of my dad. But now they’re all alone and we can only talk and see them by phone. It’s not always easy to calm my mom down when she gets fixated on something and she’s inclined to lash out at my dad.

There’s lots more to deal with. Next, is figuring out what to do with the rest of their stuff and getting their house sold. My dad did sell one of their cars last week, so that’s done. I have to figure out which companies to notify about their change in address. It’s not easy when you only have some of the information. I’ll let them update their friends.

It’s tough getting old and I realize, I don’t know the half of it yet. I keep wondering if we’ll make better choices or will we be just the same? Are we learning from this? It’s easy to say yes, we are. We’ll see if we’re any different when we reach that point.

24 thoughts on “Move to Assisted Living”