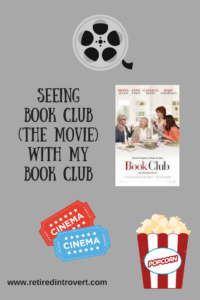 Tuesday night was the scheduled night of our May book club meeting.  We decided we should use this time, instead of discussing this month’s book, to see the new movie “Book Club”.  If you haven’t seen the movie, you should.  I think you’ll like it.

This movie is about four women who’ve been lifelong friends and started their book club years ago.  I’m not sure how old they are supposed to be in the movie – maybe their late 60s/70s?  (The actresses are all over 70 except for Mary Steenburgen, who’s 65.)  They’re all very successful but are at different points in their lives, which is typical of any small group of women.

At one of their monthly book club meetings when it’s Vivian’s turn to pick the book, she chooses “Fifty Shades of Grey”.  At first, they’re aghast.  “We can’t read this!!”  But they forge ahead and become pretty much obsessed with it.  And start thinking about things they hadn’t thought about for a while.  They actually go on to read all three books in the series.

The men in the movie

I don’t want to give too much away, but I’ll give you a hint of the experiences each one has while they’re reading these books.  The men are important but they aren’t the focus of the movie.

This movie is full of double entendres and subtle inside jokes.  Some of Sharon’s lines are priceless.

I think I liked it most of all because, while our book club members don’t have these exact kinds of experiences (at least I don’t think we do), we do have fun together and can be ourselves.  The fact these characters were lifelong friends made it easy for them to honestly talk about sex and aging, and to offer support to anyone in the group who wanted to try something new.

My book club and “Fifty Shades of Grey”

My book club actually read this book when it first came out.  Some had trouble getting through it, while I ended up reading all three of the books in the series.  Based on several reviews I’ve read, it seems people either love the books or hate them.

I saw the books as a love story and the effects of a troubled childhood on that love, which led to Christian Grey being the way he was.  Sure, there were lots of steamy sex scenes, but those were more indicative of his control issues which stemmed from things he’d experienced earlier in life.  I think most people get hung up on the sexual aspects and miss the romance.

I recommend both the movie and the books.  With the movie, it’s simply enjoyable seeing these four women together and I got a kick out of their banter.  Whether you like the “Fifty Shades” books or not, see the movie.  It’s about so much more.