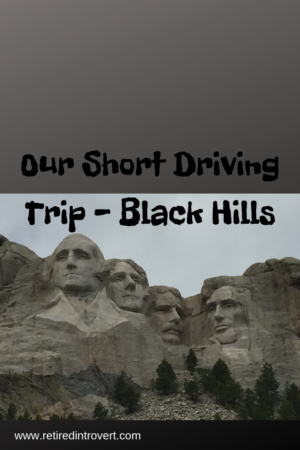 Tim doesn’t have much vacation so we try to schedule trips around the holidays. And because he’s so short on time off, our recent road trip was pretty short. Two days on the road, two days there.

The drive to the Black Hills

I’m 63 years old and had never seen Mount Rushmore in person. For some, that may not be a big deal, but we live in Iowa, so there’s no excuse for not getting there. We tried to take this trip last year, but we stayed home because I was feeling a little shaky. We made it this year!!

It’s a long drive but we stopped a couple of times along the way.

Other than our lunch in Sioux City, our first stop was in Mitchell, South Dakota. Yes, we visited the Corn Palace. No doubt it’s a little “corny”, but how could we go by and not stop?

We weren’t there long; just enough to get a flavor of the place. There’s really not that much to see. Did you know it’s been there since 1892? They replace the corn used in the murals once a year. They strip the old corn at the end of August and the new murals are up by the first of October.

Along the way on I-90 in South Dakota, we went through the area known as the Badlands. We decided not to take the scenic highway through the actual Badlands because it would have added another hour to our trip. It just didn’t make sense going or coming home.

But we could see the terrain had definitely changed from the flat land up to that point. The hills were beautiful, filled with various colors of green depending on the type of foliage.

Another “have to” stop is Wall Drug. By the time we arrived, it was time for dinner, so we decided to eat there. We had a great meal. Tim had a hot beef sandwich (and a piece of pie) and I had the baked ham dinner, that included potato salad and baked beans. Just the kind of food we needed!!

We shopped around a little. Very little of the place is what I’d call a drug store. They have various little shops throughout. And a soda fountain. As we left, I had to get a malt. I got banana, but wished I’d had chocolate. The banana flavor was artificial and the shake wasn’t very thick.

But now I can say I’ve been to Wall Drug. Whoopee!!

Getting to the Black Hills

Once we made it to Rapid City, we drove south into the Black Hills National Forest. We stayed in a little town called Custer, with a population around 1800. It was after dark when we made it to our hotel – the Bavarian Inn – so we couldn’t really see much of the scenery.

Our hotel wasn’t fancy but it was clean and had some cute touches. They had a pancake bar every morning with a machine that made the pancakes. You could top them with just about anything imaginable. They also had yogurt if you preferred a parfait of yogurt and fruit.

We were tired that first night and didn’t do anything besides check in and go to bed.

Our first day was focused on the sites close by. We visited Crazy Horse first. Going in, I knew next to nothing about it. It was fascinating. Coming out, I think I’d like to donate to it. The foundation takes no tax money and it’s one family’s labor of love. I suppose that’s why it cost us $12 each to visit and that didn’t include anything other than admission to the grounds.

They’re currently working on his outstretched arm, hand and the horse’s mane. I’m pretty sure I won’t see it finished in my lifetime, as it’s hard to tell that much has been done since 1998. Of course, I can’t appreciate what goes into preparing the rock for sculpting.

After Crazy Horse was Mount Rushmore. We took the Presidential Trail so we could get closer and see it from different angles. At the Sculptor’s Studio, we saw a model of the sculpture. It showed that the original plan was to include their bodies down to their waists.

The sculptor died in 1941, and even though his son took over, the project was declared finished and funding was cut off. I wonder how much longer it would have taken to finish the rest of their bodies.

We also went back at night for the lighting ceremony. Due to construction, the usual seating wasn’t available so we had to stand to watch. We waited for 45 minutes for a brief audio program and then the lighting. Honestly, we were disappointed. The lighting made the faces look fuzzy.

We drove through the park, hoping to see wildlife. Early on, we ran into three bison on the road, with no interest in moving. Fortunately, I think they’re used to cars so they didn’t seem dangerous. But I wasn’t willing to test it by getting out of the car!!

We did see elk, deer and a herd of 60+ bison. Unfortunately, the herd wasn’t close but we could see all of them on the faraway hill.

Driving along the Needles Highway is fun because of the scenery and the three areas where you drive through a narrow passageway through the rock. Two were short drives but the third was definitely a long one.

This also took us to Sylvan Lake. The scenery is like no other, with all different kinds of rock formations, all throughout the park.

This was our long driving day. We drove up to and along the Spearfish Canyon Scenic Byway. It was nice but after a while, you’ve seen about all there is to see. We did see a waterfall along the way, but didn’t stop.

We headed to Deadwood for lunch. Then we strolled the shops a little. Did you know practically every place along Deadwood’s main street is a casino? Even our lunch spot had a room with slot machines. Not what I expected at all.

The highlight of the day was visiting Mt. Moriah, the cemetery where Wild Bill Hickok and Calamity Jane are buried. We walked the entire cemetery, even though there were no more “famous” inhabitants. It’s such a hilly place, it’s hard to believe it would be chosen for a cemetery.

On our way back, we drove through Rapid City, intending to stop at a record store for Tim. It was on our way but he decided he was ready to head back. It was a lot of driving and he did it all. Plus we were faced with two slowdowns – a truck painting lines on the road and construction with a flag person.

We got back to our room early and hung out there. It was storming, so it was good to be inside.

We found the best place to eat in Custer. It’s called Black Hills Burger and Bun. We liked it so much we went twice, even staying until 11:00 AM on the day we were coming home to have lunch before we left.

Tim said it was the best coleslaw he’s ever had and he’s had coleslaw in a lot of places!! They had great burgers and waffle sweet potato fries that were yummy. We found out the owners are from Nevada, Iowa. Small world.

While killing time before 11:00, we stopped at Dave’s Rock Shop. I’m not usually into rocks but Tim likes them. He wanted to get Rose Quartz, which is the state rock of South Dakota. I didn’t even know there was such a thing!! If you’re interested in learning which states have them, here’s a good link.

His plan was to use it in a display outside, with other rocks he already has. This place was full of beautiful rocks but his “rule” was only those found in South Dakota. So, we ended up with three types of quartz – rose, smoky, and white.

We definitely have more road trips planned but I am wondering how they’ll go. We went to the Smoky Mountains six years ago and did just fine. But we also spent a week.

We might have tried to pack too much into our two days, with so much of it being driving time. There were more sites we’d liked to have checked out, but there simply wasn’t time. I’m just happy I finally made it to the Black Hills and Mount Rushmore.

Tim thinks it will be better when he’s retired and we can take our time. I think that’s true. But it doesn’t change the fact that driving can be a drag. Maybe he’ll ask me to take a turn next time???