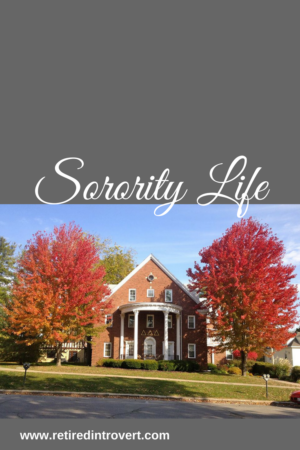 I see pictures on Facebook of friends taking their kids back to college.  It reminds me of my college days and my life in a sorority.

There are so many myths, or simply plain ignorance, regarding what it’s like being a member of a sorority.  So, I thought I’d tell you what it was like for me.  Keep in mind, this was 40+ years ago, so my memories will be fuzzy.  But some things were so meaningful, they’ll never leave me.

I decided to attend the University of Iowa along with my friend Sherri.  We were going to be roommates our freshman year.  When it came time to decide if we were going to go through rush, we had to consider what that might mean for us.

The daughter of a friend of our family, who had also gone to Iowa, had joined a sorority and was very glad she did.  Her dad told us it was a good way to make a large university a little smaller.  I’ve never forgotten what he said because it turned out to be so true.

Don’t get me wrong.  I still had friends outside of my sorority.  It was just a great way to have friends close by that you could always count on.

Today, the rush process is called recruitment.  It’s very much like a job interview.  You have a few minutes to tell someone about yourself.

Sherri and I had decided we’d take the plunge.  This meant we had to move into our college dorm a week ahead of everyone else.  It was a crazy week with all different kinds of parties and lots of talking.  We had just experienced the Ankeny tornado of June 1974, so that seemed to be what everyone wanted to know about.

We met lots of girls (both those already in a sorority and those going through rush with us) and toured lots of houses.  They fed us and entertained us with skits and songs.  It was nothing like I’d ever experienced.  And then we finally had to narrow it down.  Sherri and I ended up going in different directions. I chose Delta Delta Delta; she chose Gamma Phi Beta.

Life as a sorority pledge

We had to live in the dorm our freshman year, so we didn’t yet have the complete sorority life experience.  Monday nights we went to the house for dinner and our pledge meetings.  We were there other times as well, of course.

As pledges, we had certain responsibilities, such as study hours and phone duty.  (Remember, this was before cell phones.  We had phone booths throughout the house and one number people called to talk to anyone in the house.  Phone duty involved answering the phone and then buzzing the member who the call was for.  Each member had her own unique buzz.)

Our pledge ship lasted that entire first semester, and we spent lots of time learning the history of Tri Delta.  Today, pledges are initiated only about two months after pledging.

There was no hazing.  We might have had to do a few extra things as pledges, but nothing was dangerous or embarrassing.  We were each assigned a pledge mom, who was there to answer questions and make sure we were comfortable and always had someone to go to.

Life as a sorority initiated member

We were initiated once we were back in school after the semester break.  The experience was wonderful and it becomes even more so as an initiate.  We were introduced to the “secrets” of Tri Delta, including a handshake and password for entering chapter meetings.  Most importantly, we learned what Tri Delta stands for and its purpose for developing us into good women.

I was able to move into the house my sophomore year and I lived there through my senior year.  I never understood why anyone would want to live anywhere else.  Sure, by the time I was graduating, I was ready for something new.  But living in our house meant I didn’t have to clean a bathroom, I had my meals provided, and always someone around if I wanted company.

One myth I’ve read about is that sorority living is more expensive.  It really isn’t.  Yes, we had dues and other expenses but overall, it doesn’t cost much more.  Most of the expense is room and board, which you’d have anyway.

We changed rooms and roommates every semester.  It was fun living with different people and in different rooms.  The rooms in our house were all quite different.  Each of my roommates was great and provided me with a different experience.

OK, there have to be some negatives, right?

Not everything is wonderful about living in a house with 50 girls.  No, you’re not going to be best friends with every single one.  And some don’t always follow the rules, which creates tension for all.  Some have trouble paying their bills.  Some are loud; some are quiet.  Some even decide it’s not for them.

But probably my worst experience was being on the inside of the rush experience.  After the rushees came to our house, we spent hours after the parties deciding who we would (and wouldn’t) invite back.  We had numbers to meet and some discussions were very heated.

We had to be very careful when it came to a legacy (a girl whose mother, grandmother or sister was a Tri Delta).  We had to have a very solid reason for not inviting a legacy back.  And we had one of those experiences, which resulted in a few bad feelings.

Would I do it again?

I’d do it again in a heartbeat.  I made lifelong friends through my sorority.  And your sorority life doesn’t end when you graduate.  There are alumnae chapters all over the world, and I’ve met Tri Deltas from many colleges and universities right here in town.  I even hired one when I was working!!  It’s so fun when you find out someone else is a Tri Delta like you.

Being in a sorority is more than just having a place to live during college.  We learned about teamwork and responsibility.  There were so many leadership opportunities.  We participated in philanthropic activities to raise money for children’s cancer charities.  We planned and enjoyed social events throughout the year and we made lasting friendships.  We’ll always have that perpetual bond of friendship.

If you’re interested in learning more about Tri Delta and all it stands for, please check this out.  You might learn a sorority is so much more than you thought it was.  ☪