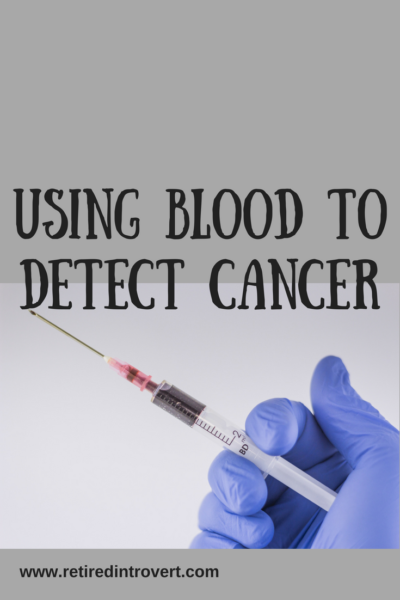 My mom has ovarian cancer.  This was not what any of us expected to hear.  She’d been hurting for several months but we all attributed it to the fall she took last September.  But when she began having gastrointestinal issues and was losing weight for no reason, she finally got serious about consulting with a doctor.

Cancer is not something that’s common within our family, so that’s the last thing we thought could be wrong.  She was diagnosed in May and in many ways, it still doesn’t seem real.

The first step was a pelvic ultrasound, which highlighted something they wanted to explore further.  So next she had a CT scan and from there, a biopsy.  In the meantime, she also had a special blood test – CA-125 – which definitely showed she needed the biopsy to identify where the cancer was in her body.

I’ve learned a lot about various tests as we’ve gone through this experience, including a way to detect certain types of cancer earlier.  It’s a blood test and although it’s not foolproof, it can raise a red flag, indicating further review is necessary. I started to wonder why we aren’t doing these tests routinely.

I do know that I no longer have a urinalysis as part of my annual physical because it’s now only done if they think there’s a reason for one.  I didn’t realize a lot of the things they used to test for with urine can now be detected earlier with a blood test.  And urine tests can actually result in too many false alarms for cancer, so doctors have stopped doing them unless they are trying to diagnose a specific condition.  Guess that’s the value of new technology!!

More about the blood test

I had never heard of the CA-125 blood test until my mom’s doctor asked her to have blood drawn once she suspected cancer.  I didn’t know there was a blood test that could help detect certain types of cancer.  Ovarian cancer is one of them.

A CA-125 test measures the amount of the protein CA-125 (cancer antigen 125) in your blood.  A CA-125 test isn’t accurate enough to use for ovarian cancer screening in general. Many noncancerous conditions can increase the CA-125 level, including normal conditions, such as menstruation, and noncancerous conditions, such as uterine fibroids. But certain cancers may cause an increased level of CA-125, including ovarian, endometrial, peritoneal and fallopian tube cancers.

In my mom’s case, the test was done to further validate what they were seeing through the ultrasound and CT scan.

When is the blood test performed?

According to the Mayo Clinic, there are three reasons to perform the CA-125 blood test.

Ovarian cancer can definitely be genetic.  Another test often done is the BRCA, which is also a blood test.  Through DNA analysis, it identifies a gene mutation in either one of the two breast cancer susceptibility genes — BRCA1 and BRCA2.  Women who have inherited mutations in these genes are at an increased risk of developing breast cancer and ovarian cancer compared with the general population.

My mom’s doctor is also my doctor, and as part of my six-month checkup in June, she had the CA-125 test done with my blood.  She also recommended I have a pelvic ultrasound and then begin having one every couple of years.  While she thinks my mom’s case is random, due to the lack of family history, she still doesn’t want to take any chances.  I had the ultrasound in early June.  Both tests indicated no signs of ovarian cancer.  I have not had the BRCA test; I plan to ask my doctor about that at my next annual checkup.  But it sounds like she’ll continue to perform the CA-125 blood test at each physical.

My mom has had three chemotherapy treatments, three weeks apart.  This week she has another scan to confirm the tumor is shrinking.  They chose to start with chemotherapy before surgery to see if they could shrink the tumor as much as possible before trying to remove anything surgically.

Then she sees both of her cancer doctors to discuss what comes next.  She is tentatively scheduled for surgery in mid-August.

We believe the chemo is working.  She’s had back pain for months and within the last couple of weeks, it’s no longer there.  So while going through all of this is definitely not fun for her, she is starting to see positive results.  The doctors are encouraged and tell her she’s doing great.

Chemotherapy is not what it used to be.  Other than being tired, she’s handled it very well.  She did have a blood transfusion after her second chemo session, to ensure her hemoglobin stayed where it needs to be.  She says she thought that gave her a little more energy.

I’ve learned that the risk for ovarian cancer actually increases with age, so it’s not uncommon for someone my mom’s age to be diagnosed with it.  The risk increases once a woman reaches menopause.  I’m glad my doctor is being proactive by monitoring my body so if I should inherit ovarian cancer, we can catch it early.

As medicine changes over the years, let’s hope doctors continue to find ways to identify every form of cancer earlier.  Or better yet, determine how we can avoid it in the first place!!!