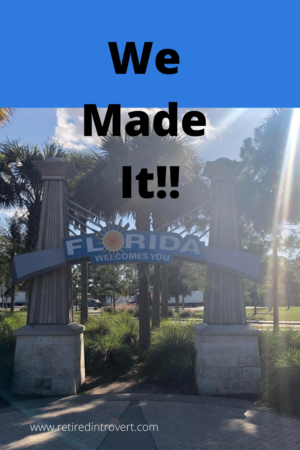 After three days on the road, we have finally arrived in Florida and are now officially snowbirds. It’s still hard to believe it’s real.

Tim wasn’t excited about the driving, but my goal was to make the journey as fun as the destination. While there was nothing exciting to note, we did see some new places and tried new restaurants. The first two days were easy, at least by me. The third day seemed the longest, I suppose because we were ready to be here. Now, this is our second full day and I’m finally feeling “settled”.

I thought today I’d focus on our trip, providing the highlights. We drove through eight different states, if you count the little dip into Alabama on I24, so we saw a lot.

Tim had mapped out our route, picking the fastest one (according to Google), and deciding how far we’d go each day. He had reservations at hotels and you never know what they will be like. I have to say, he did a great job.

We stayed at a Drury Inn and a Drury Inn & Suites. Other than the size of our room, the accommodations were exactly the same. Hot breakfast, free hot dinner (which we didn’t choose to do but think maybe we should have the second night), guest pantry for drinks and snacks, mostly the same layout.

We will be taking the same route home and staying at the same hotels. The only thing that might change is where we eat dinner, at least in Marietta.

Our first night was in Marion, Illinois, south and east of St. Louis. The hotel was right off I57 and there were all kinds of places to eat and get gas. Tim is a Bob Evans fan, so he wanted to eat there. It was my first time.

Our second night was in Marietta, Georgia, just north of Atlanta. The area wasn’t as great but the hotel was nice. Tim had picked a local spot – Delray Diner – for dinner and we were a little disappointed. The food was OK, but the decor was a little odd. And we feel they pulled a bait and switch on us, advertising a $9 grouper sandwich, but giving Tim the $16 version. Evidently the “special” was a frozen piece of grouper while the more expensive one was fresh. However, our waitress didn’t even ask which one he wanted.

Tim started laying things out way ahead of time. I did a little bit of planning in my head and by making a few lists, but I didn’t get serious until the day before we left.

So far, I don’t think we did anything wrong in deciding what to bring. We’ll see as time goes on. Having stayed in condos before, I know what they typically provide. But for five weeks, I also wanted to have some of the stuff I use and like. That’s the beauty of driving instead of flying!!

We knew we’d be grabbing quick lunches and we decided we didn’t want to load up on fries, so we had a bag of individual bags of chips. All we did was order sandwiches. This actually worked out great. We also had a small cooler that would hold just want we wanted to drink each day. All in all, our eating plan worked out.

The hardest part for me was deciding what I wanted to bring for projects. I typically work on something at night, so I brought two knitting projects and a few cross stitch projects.

If I finish anything, it will likely be one of the knitting projects, only because it’s not that far from being finished. I’ve called it my car project, as I worked on it all summer just in the car. I assumed I’d get a lot of knitting time logged on the three-day drive. I did one row the first day and decided I wanted to watch where we were going instead.

I also brought something I can do related to cardmaking, as I couldn’t bring all that with me and I’ll know I’ll really miss it. I decided I’d give alcohol inks a try and make some backgrounds for future cards. I think I have everything I need and I’m excited about getting started.

I like keeping a travel journal, which I’ve blogged about before. I brought along a notebook that’s easy to write in and took notes along the way.

We drove through several large cities: St. Louis, Nashville, Chattanooga, Atlanta, Tampa. I think we found the secret to getting through Atlanta, which everyone complains about. Stay north of the city and drive through it on Sunday. While there was traffic, it was nothing like I expected. We made it through with no trouble.

We crossed several large rivers: Missouri, Mississippi, Ohio, Tennessee, Cumberland. While we’ve crossed the Mississippi many times, we were surprised at how wide these other rivers were.

I love GPS and we used the navigation system in my car to get everywhere. And maybe I’m old school, but there’s nothing like a paper map. It’s tough to look at that little phone screen and get the perspective as to where you are. So, starting with Tennessee, we started stopping at the Welcome Centers to pick up maps – real maps!! I now have Tennessee, Georgia, and Florida maps. I even used them frequently after we got them.

Eating on the road

On our first morning, we grabbed breakfast at McDonald’s. Lunch was Wendy’s, as I’ve really enjoyed their hamburgers recently. We ate at Wendy’s both the first and second day!!

As we got into Tennessee, we started seeing signs for Zaxby’s. We didn’t know much about what it was and thought maybe we’d stop at one on our trip back home. But when we were ready for lunch in Valdosta, we checked to see if they had a Zaxby’s and they did. So, we had our first lunch there and we liked it!!

Other than our lunches, we didn’t eat much while in the car, which is pretty good for us.

Here are a few pictures from the trip.

I’m hoping to do more blogging while we’re here, but we’ll see what actually happens. I have some recipes to share, plus will try to keep you updated on our snowbird experience.