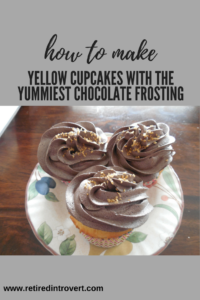 Finding a recipe for yellow cake

Have you ever tried to make yellow cupcakes (or yellow cake) from scratch?  I’ve tried a few recipes and they are never quite right.  They always seem dense and dry.  That’s not what I think of when I think of yellow cake.  So, I cheat.

I bet you’ve made or at least heard of Jiffy mixes.  Did you know these were created in 1930?  And they’re still going strong.  For me, there’s nothing better than Jiffy’s Golden Yellow cake mix.  So, in this instance, save yourself the trouble and use this instead of trying to make a yellow cake from scratch.  Another good thing about the Jiffy mix – it comes in a size that makes just 12 cupcakes.  Perfect!!

This is where you can show your stuff and top these yellow cupcakes with the creamiest, yummiest chocolate frosting.  And I have a little secret for making it extra chocolatey.  It’s Hershey’s Special Dark cocoa.

I’m not kidding when I say I can eat this straight from the bowl.  It makes a little more than you need for 12 cupcakes, but don’t throw it away.  I’ve frosted brownies with it.  We’ve even used it for dipping graham crackers.  You don’t want to waste a bite!!

Another secret to this frosting recipe is whipping it.  You really can’t whip it too much.  That’s what makes it light and fluffy and oh so good.

Since I usually share these with others, I found these perfect disposable cupcake containers on Amazon.  They are extra high so if you want to include a LOT of frosting, there’s room.  (That’s what you can do with the extra frosting!!)  They each hold six cupcakes and there are twelve to a package.  If you don’t want extra high, they come in standard size as well.

And I forgot to mention – I always like to include some sprinkles on top, to make them extra yummy looking!!

Let me know if you make these or only the frosting.  I want to know if you think it’s the best frosting you’ve ever had!!! 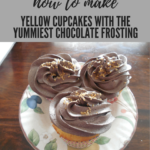 This is the fluffiest, yummiest chocolate frosting you'll ever make. And if you want it to be extra chocolatey, try my secret (Hershey's Special Dark cocoa powder).
Course Dessert, Snack
Servings 12 cupcakes

5 thoughts on “Yellow Cupcakes with the Yummiest Chocolate Frosting”