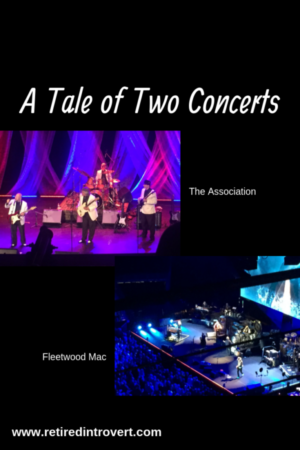 Tim and I love to go to concerts.  But it seems like they always come in batches.  Last year, we went to three concerts, all two weeks apart!!  That’s a little much, even when you love them.  And it can get kind of expensive.  💲💲💲

These weren’t our first concerts of is year, but it seemed like a good time to write about our experiences.

This one took us back in time.  The Association Greatest Hits (released in 1968) was the first album I bought many years ago.  And “Windy” was one of my very favorite songs, and still is.

We went into this not knowing what we’d get.  These guys are old!!  And we weren’t sure how many of the original members there would be.  While there were a few “new” guys (been with them 20 years), there was one original and one who joined one year later.  (They formed the band in 1965.)

Not knowing what our experience would be, we chose not to purchase the most expensive seats.  Our tickets were $31.50, which isn’t much for a concert these days.  But we were still able to get in the first row of the balcony (dead center even) at Hoyt Sherman Place in Des Moines.

As we were driving home, Tim did some googling and found out the following:

The crowd was pretty much what you’d expect.  A lot of old people like us!!  And while they advertised there were still tickets for sale, the place seemed full.

The concert began with a video of their old clips.  They were on the Ed Sullivan Show, Bandstand with Dick Clark, and the Smothers Brothers.  That sure brought back memories!!

Their opening song was “Windy”.  A good choice, as they sounded very good and got things off to a good start.  They played their other hits – “Never My Love”, “Cherish”, “Along Comes Mary”, “Goodbye Columbus”, and “Everything That Touches You”.

But they also played a lot of oldies recorded by others.  They did a medley of songs from the movie “The Big Chill”.  And they did a song written by Jules Alexander (a band member) about Dubuque called “Dubuque Blues”.  I couldn’t understand all the words and the song was just OK.

I thought their best songs were “Windy” and “Along Comes Mary”.  They sounded the most like the original versions.  The harmony seemed off on some of the other songs, at least to me.  Not unexpectedly, they didn’t move around much and they tried to be funny, which tended towards corny.

They ended with a shortened version of “Windy” after about an hour and 15 minutes of playing.  How often do you get home from a concert before 9:00?  🤔

This concert was entirely different.  First, it was in Wells Fargo Arena so a much larger venue.  Second, their show was more of a production with a lot more light effects and videos.

Now, the crowd was somewhat similar to that at the Association concert, but there were younger people in the crowd.  Maybe that’s because of their new band members – Neil Finn formerly of Crowded House and Mike Campbell who toured with Tom Petty, although they aren’t young themselves.

Here are a few fun facts about Fleetwood Mac.

We were seated in the third but still paid $99.50 for each ticket.  The seats were generally OK, but unfortunately, we had a railing partially blocking our view of the stage, so we had to shift at times to see certain members of the band.

They sounded good.  I’ve never been to a Fleetwood Mac concert before, so I can’t compare this group to what they sounded like with Lindsey Buckingham.  Most of their old songs sounded the same as always, although I noticed Stevie Nicks stuck to the lower notes when in the past, she would have gone higher.

They had no intermission and played for almost 2.5 hours.  Towards the middle, however, Mick Fleetwood had an extended drum solo performance that gave the rest of the band a chance to rest.  And I pretty much zoned out for a while.  😌

I especially liked their tribute to Tom Petty with Nicks singing “Free Falling” and videos of him in the background.  They sang most of their bigger hits and we learned that Fleetwood Mac wrote the song “Black Magic Woman” even though Santana made it a hit.

I’d give this concert 👏👏👏.  Some might give it more claps than I have, but while I enjoyed the concert, it wasn’t as good as others I’ve been to.

I mentioned that the guys in the Association were old.  Well, the members of Fleetwood Mac are up there too.  Nicks, Fleetwood, and McVie’s ages range from 70 – 75, so they’re not spring chickens either.

Overall, I’m glad we went to both concerts.  It’s good to get out and about and exposed to different things.  And while both bands started about the same time, they are so different in terms of staying power and popularity.

Now, ready for our next concert – Mannheim Steamroller – right before Christmas.  Can’t beat that.  It’s an annual tradition.  🎄🎄

Hey – before you leave, have you noticed my new rating system below?  Take a second and rate the post.  This will definitely help me understand what types of posts you like more than others.  Thanks for following!!!

2 thoughts on “A Tale of Two Concerts”