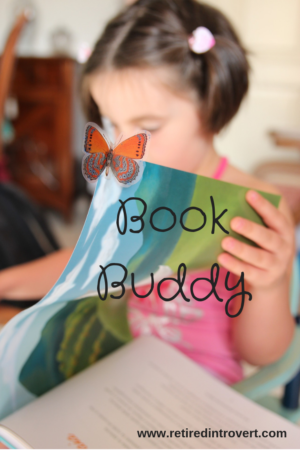 A few years ago, a friend of mine asked me if I’d like to volunteer to read to four-year-olds.  It was a new program called Book Buddy and was established by the United Way’s Women’s Leadership Connection (now called Women United) to support their education goals.  I thought it sounded like a good thing to do, so I said “yes”.

We started reading again this week for this school year.

I don’t know if I have all the correct details, but I believe it began with readers at just one early childhood center.  Readers, or Book Buddies, read to two students for fifteen minutes each, either on Tuesday or Thursday.

This year, there are readers at eight different early childhood centers throughout the Des Moines area (including one in Perry) and depending on the location, reading can be any day from Tuesday through Friday.  That growth says a lot about the value of the program.

We read for 24 weeks during the school year, and each child receives the book at the end of each week to take home.  Based on statistics, these might be the only books some of these kids ever have.

As noted on the United Way Book Buddy site, the student assessment statistics are compelling.  74% of the students showed improvement last year.  This is so critical as once a student starts behind, they stay behind.  And lower income children have fewer opportunities to pick up these skills.

My involvement with Book Buddy

When I became a Book Buddy a few years ago, I was still working but I didn’t let anything interfere with my ability to leave for about an hour on Tuesday mornings.  Even on some pretty miserable days!!  ❄❄❄

The first year, I shared a schedule with one friend so I was going about every other Tuesday.  Since then, I’m part of a three-person team, so if the schedule holds true, I’m there every three weeks.

It helps that I’m retired; I can be a last minute sub if one of the others has something come up.  They’re both working so they have more to schedule around than I do.  😉

As I mentioned, we read to two different kids each time.  They all have such different personalities!!  And some don’t have a good grasp of English, which can make communication challenging.  But a book with good pictures is fun no matter what language you speak.

How the program has evolved

I’ve already mentioned the growth in the number of centers participating.  That also means more volunteers.  We’re starting to see more men as Book Buddies, which provides some of the boys with male role models they might not have at home.

Just this week, I observed how excited one of the guys was and how his little boys responded.  He told me they had so much fun, they didn’t even get through the entire book!!

Each year, we’re asked about the books and we vote on which to continue and which to stop reading the next year.  Most of them are so perfect and are on the schedule year after year.

At the end of each year, we have a “graduation” party.  This is when all the kids and all the Book Buddies get together one last time.  The kids usually sing a couple of songs for us and then give each of us a gift.  Early on, we received a book of pictures taken during reading time.  Lately, we’ve been getting handmade items from the kids.  The last two years, they’ve given us bookmarks.

My experience as a Book Buddy

I’m always curious to see the types of students assigned to me.  Last year, I had one who was very quiet (not sure about his English skills) and wanted to draw all the time.  The other was a little monster!!  Sorry, but he didn’t want to participate and he kept telling me it was time for me to go.  I found out he was like that with Lori and Angie too, so I didn’t take it personally!!

This week, I had two little girls.  The first was very quiet but she did respond when I asked her a question.  She was also a little distracted, which isn’t surprising the first week.  There’s so much going on anyway, and we had to go to another room, so it was hard to focus.

The second little girl was so sweet and talkative.  She pointed out her best friend Rosy and showed me her cute shoes.  And when we read the book (which was about feelings), she’d make the faces that were in the pictures.  We had a great time!!

We should have these same two girls all year but at times in the past, there have been changes.  And if they’re short on Book Buddies on a given week, we may have to read to two kids at once.  That works out OK, but sometimes they try to compete for your attention which isn’t conducive to getting through the book.

I read on the website that they are at capacity for the year (that’s exciting to hear) so if you’re interested, plan ahead and sign up next spring.  They also have another reading program called Power Read which involves reading to elementary students.

And it appears there are Book Buddy programs across the country, so if you don’t live in the Des Moines area, check out what United Way is doing in your city.

Beyond the reading skills enhanced through the Book Buddy program, we hear all the time about how much the relationships we have with the students bolster their confidence.

So, not only are we building hard skills (reading, learning the alphabet) but we’re developing their soft skills (interacting with others, meeting new people) too.

As with most volunteer activities, I’m getting as much out of it as the kids.  I always leave there with a happy feeling.  😊

And the most important to me –  we’re helping to nurture in these kids a love of books that will add so much to the rest of their lives.  📚📚📚