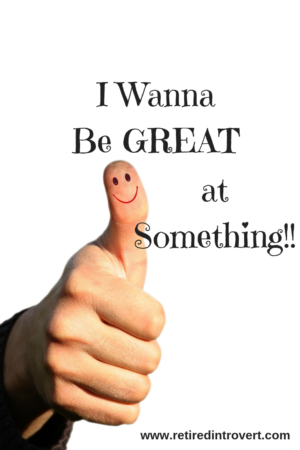 I dabble in a lot of different things.  It seems like I’m always seeing something I’d like to try.  I can do lots of things, but not at the level I would like.  I want to find the thing I can be great at.

I have this yearning to be creative, but sadly, I’m not.  I’ve always been more of a left brain thinker.  Does that keep me from being more creative?

Sure, I “make” things.  But whether it’s food, knitting, sewing or card making, I need a recipe or a pattern or even an example for inspiration.  I’m great at following a recipe or pattern, but I can never reach the level where I create something completely from scratch.

I think what I’m trying to identify is my talent.  According to the Merriam-Webster dictionary, talent is defined as:

Along with talent, I’ve always wondered if I’m really passionate about anything.  Shouldn’t I have a passion?  Does everyone have a passion that drives them to excellence?  Is that passion fueled by talent?

Even when I was working, and I think I had a successful career, I was more of a generalist than a specialist.  I knew a little about a lot of things, but didn’t have one great skill.

Being a generalist can definitely come in handy in a job, and it meant I could be involved in a lot of different types of work over the years, but I was never THE expert at something.

Do you know someone that can do something with ease?  That person that can draw, paint, write,  an instrument, play a sport, cook/bake, garden, sing?  They typically have to practice to become even better, but they start out ahead of everyone else because of their talent.  I’m always envious of anyone like that.  Do they even realize how lucky they are?

“Everybody has talent, it’s just a matter of moving around until you’ve discovered what it is.”

Some use their talents to make a living, while others express their talent through a hobby.   The lucky ones are those that can survive by doing the thing they love the most.  But I’ve also heard that once your hobby becomes your job, it isn’t as fun.

It’s also easy for us to make assumptions about people and their skills.  For example, when we see a good basketball player we assume he/she has natural ability.  In reality, he/she probably spent hours and even years developing his/her skills.  That’s the part we don’t see.  I’m sure there’s also a talent there, but you can’t excel on talent alone.  And again, where does passion and drive fit into the picture?

I googled this topic and was amazed at how much information I found.  I guess I’m not the only one thinking about this!!

According to the author of this article, “it takes anywhere from 6-10 years to get great at something, depending on how often and how much you do it. Some estimate that it takes 10,000 hours to master something, but I think it varies from person to person and depends on the skill and other factors.”

If you’ve read the Malcolm Gladwell book Outliers: The Story of Success, you learned that successful people such as Bill Gates and even the Beatles put in countless hours honing their skills, most of which were tedious and frustrating.  To others, they might have  as overnight successes, when in reality, they’d already put in those 10,000 hours!!

“Success consists of going from failure to failure without loss of enthusiasm.”

What’s the answer for me?

Writing this has definitely opened my eyes and made me reflect on my life.  There are a few things I can do (or could have done) if I truly want to be great at something, but most importantly, I have to decide what I’m willing to do.  That’s the key.

First, I would have to determine the one thing I want to be great at.  Second, I would need to focus time and energy on that one thing.  That might even mean taking classes or asking others for advice, but most importantly, I would need to practice.

I’ve come to realize being a dabbler does not work if your goal is to be great at something.  I would have to give up some of the things I do in order to achieve that required focus.

The alternative?  Be satisfied with being a dabbler and continue to enjoy a variety of things.  Knowing myself, I think this is probably the direction I’ll take.  I can’t think of anything I want to give up.  In fact, there are other things I still want to try!!

Writing this has been liberating.  I have to admit, I’ve never had the drive and/or passion it takes to be great at something. Not in sports, not in my job, nor in my hobbies.  Not sure why; it’s just never been there, even if I had a little bit of talent.

Given that, I have to accept that I’ll never be great at anything.  But, that doesn’t mean I can’t be average (or even good) at a variety of things and still be happy and content!!

6 thoughts on “I Wanna Be GREAT at Something!!”