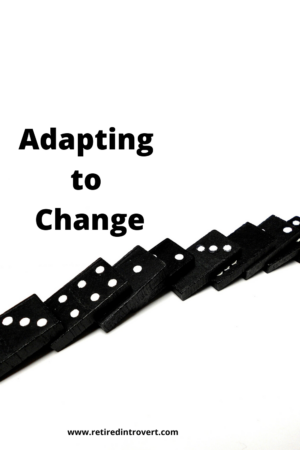 I noted in one of my previous posts that I’d wisely chosen my WOTY (Word of the Year), which is Adapt. Not only am I adapting to the changes required to help my parents, but we’re all adapting to this COVID-19 pandemic. It’s messing things up for us in a big way as something changes every day. I know we’re not alone in that.

Last week, I was in Florida for our annual trip to sun and sand. Some might say we shouldn’t have gone, with everything going on. But the trip was paid for and we both needed a little Vitamin D and relaxation. We had great weather and ate good food. Too much actually, including the almost daily visit to the Candy Kitchen for ice cream.

Shortly after getting there, I lost the pain in my neck/back/shoulder. I haven’t been able to pinpoint exactly where it hurts. I considered seeing my chiropractor before we left, but decided not to try to fit that in with everything else. The week away also gave me time to heal the cold sore that developed on the trip down there. I couldn’t blame this one on the sun.

During our time away, things started changing, almost by the hour. First, we were told my mom could not have visitors for a while. Not even family, so my dad was shut out.

We met on Wednesday (me by phone) to discuss their care plan and other move-in issues with our chosen assisted living facility. We were going to meet with the sales guy on Monday (yesterday) and move their furniture, etc. on Tuesday (today). We assumed my dad could move in then and my mom would move in on Thursday, after her neurosurgeon appointment.

Well, things started changing again. By Friday, their assisted living facility had instituted visitor guidelines as well that severely restricted what we could do with the move. The movers would have to be screened, all furniture disinfected as it came in the door, and only one of us could go with the movers to the apartment. To top it off, once he moved in, my dad would have to be quarantined for 7 days in their apartment. And if my mom moved in on Thursday, that would add another 7 days to the quarantine period.

Now we had some big decisions to make.

The complications from COVID-19

My sister and brother-in-law spent Saturday with my dad at his house packing and organizing as if the move would take place as planned. They did a lot of work and I’m sorry I wasn’t there to help.

We all met on Sunday to weigh the options and decide what to do. We could move their stuff in but wait to move them in until later. The downside – we’d have to start paying for the apartment in order to do that. If we kept my mom at the skilled care center until this was over, we’d be paying for both, since she was past the 20 days allowed by Medicare and their insurance company might pay some of it or refuse to pay anything beyond that.

After much deliberation, we decided it only made sense to postpone the move indefinitely. We might have to pay a penalty with the moving company because of the short notice, but we were hoping they’d be understanding of our situation (which they were).

We also weren’t sure what to do about mom’s neurosurgeon appointment on Thursday. Should she leave where she is at all? So, more calls to the care center to figure out who could go with her and what going out and coming back would mean for her. They encouraged us to keep the appointment since it was critical to her recovery. It was suggested I call that doctor’s office to find out if they had any restrictions.

Well, good thing I called. Her appointment had been canceled. Not sure why we hadn’t been notified. It was canceled, not because of COVID-19 but because the doctor had surgery that day. They thought the appointment had been rescheduled but we have no idea who they might have talked to, if anyone. It took several phone calls to finally get a new date. And then I had to let the care center know as they were the ones who’d arranged her transportation.

Now that those decisions have been made, all we can do is wait.

What’s going to happen next? Businesses, restaurants, schools, libraries are closing by the hour. It’s impossible to keep up with all the cancellations.

My mom and dad have been able to talk by phone and they’re going to try Skype today. It sounds like she is still quite confused and delusional. Things like what she sees on TV spark weird thoughts or memories for her. I’m not sure she understands why none of us have come to see her. At least we know she’s safe.

I’m using this time to get their financial stuff in order. I purchased a portable file tote and hanging folders so I could keep everything together and be able to take it with me when I need to. I’m documenting bank and credit card statements in Excel, so I can keep track of their expenses.

This break is giving us a chance to catch our breath before the next big wave of change hits. Let me adapt to this for a while and then I’ll be ready for more!!

Like many of my fellow introverts, I don’t mind being told to stay home. It’s heaven for me. I’ve spent more time in my studio these last two days than I have for months. It’s mostly been organizing their information, but it still feels good. A little dose of normalcy is good.

Maybe by the end of the week, I’ll even be able to open up my sewing cabinet and get a little sewing done. I might even write a post about something other than my mother’s situation. Maybe you’d like a new recipe to try while you’re stuck at home? If there’s a silver lining in all of this, it will be having that time again.

At least for a while.

11 thoughts on “Adapting to Change”