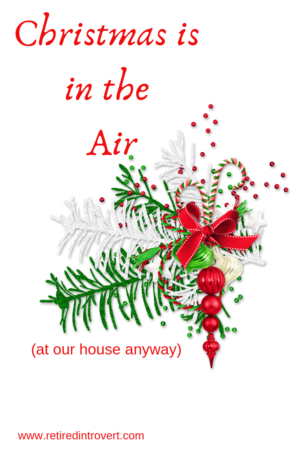 Years ago, I used to start feeling the Christmas spirit in late summer and early fall.  Don’t remember why; I just always liked Christmas and that warm feeling it brings.

But over the years, it didn’t happen that way.  Maybe I was too busy at work or I’d simply outgrown it.  I still enjoyed decorating my house (AFTER Thanksgiving, of course), but even then I was doing less and less of that as time went on.  It never felt like a chore.  It just wasn’t as magical as it used to be.

I have to give Tim credit.  He’s renewed my Christmas spirit.  I have to hold him back (or we’d already have our trees up) but he does get me excited about it and I will admit, I’ve purchased a few new decorations each year.  I’m easily persuaded.  😉

I found this when I was shopping for fall decorations and didn’t think twice about buying it.  It is so Tim.

It’s especially fun every other year when we have the grandkids staying with us as part of our Christmas celebration.  Although we probably get more enjoyment out of it than they do.  😊

We decorate inside and out and in almost every room.  We’ll have at least four Christmas trees inside and even one on our front porch!!  Tim is in charge of the outside stuff, although I usually help a little bit with the tree.  Unfortunately, he hasn’t had a good day to string the lights yet and I think it’s bugging him!!

Tim’s focused a lot of his Christmas spirit on gift buying this year.  We have his side of the family almost completely done!!  And we even have a start on some of mine, for which he deserves most of the credit.

Tim is gradually sneaking a few Christmas decorations in.   For some reason, he thinks if we buy something new, we have to set it out right now.  I’ve agreed to a few things but drew the line the day he said Mickey wanted me to put up one tree that day!!  Sorry, Tim.  I love Mickey but you can’t use him to influence me!!

Earlier this week, we bought a new Christmas tree.  Two years ago, the top tier of lights on one of mine went out.  We’ve been looking for a replacement but it was just easier to make do.  We stopped by Earl May, intending to look at their winter outdoor planters, and ended up looking at the trees.

Tim’s always said Earl May has the best trees.  They did have a big selection and they were on sale.  So, we found one!!  It doesn’t have the multi-colored lights that I’ve had before (only white) but it has sparkly snow on the tips of some branches.  I know we’ll love it.  The big question – what happens to the old one?  I don’t even want to think about what Tim might have in mind!!!

Here are a few of the things we already have out for Christmas (besides what’s in the picture above).

I have been Christmas sewing for a few weeks now when I can fit it in.  And my focus has been on presents or things for us.  I’ve made aprons for the grandkids so we can decorate cookies and make a few crafty things when they’re here.

My goal is to have everything done by the end of November (or sooner) so I can spend December getting the house ready and just enjoying the season.  I still have to decide how much baking I’ll do.  If I make it, I eat it.  And I don’t need that.

I will post pictures of my projects after Christmas since I don’t want to spoil the surprise for those receiving them!!

Tim convinced me to get our Christmas cards ordered.  Last year, we created picture cards through Shutterfly and we decided to do that again this year.  So, I have this year’s cards already sitting on my desk!!  I’ve never been so organized!!!

Well, I guess I haven’t outgrown the early Christmas spirit after all.  It just took a little nudge from my kid of a husband to bring it back.  And I have to admit, being retired sure makes it a lot more fun!!