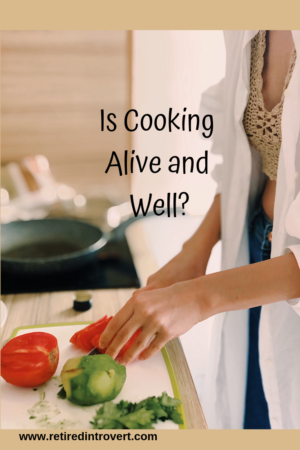 As Tim and I try to eat healthy (well, we could try harder), I prefer cooking and eating at home. Don’t get me wrong; I love to go out to eat. But there are three things I don’t always like about it: 1) it can get expensive, 2) it takes more time, and 3) it increases my caloric intake.

So, today’s question is: Is Cooking Alive and Well? I recently polled all of you and got 24 responses, which for my polls, is about average. A big thanks to everyone who voted.

I realize my choice of question for the poll may have tainted the results. I was curious about how much you actually eat at home, but I didn’t mean for it to include takeout. And in my head, my definition of cooking was pretty broad, meaning it didn’t require a fancy meal. Anything you make for yourself is cooking. So, it was challenging to come up with the right question. Oh well.

For Tim and me, I answered four times per week. Some weeks, it could be five; other weeks it could be three. It varies based on what else is happening each week.

But it’s also driven a lot by what Tim feels like when he gets home from work. And since he’s the one who’s been working all day, I usually give in, despite the fact I make 99% of our meals. This is precisely why I recommended using frozen shrimp instead of fresh in one of my recipes!! I do tend to freeze a lot of meat for later.

Here are the poll results:

I wondered if anyone would pick zero and finally towards the end, someone did. I know of a couple that I’m pretty sure out for every meal, and I mean three meals a day!!

I was more surprised, however, that two people chose seven. I’m impressed. I wish I had that discipline.

As I mentioned above, what we do is dependent on what our week includes, and not based on whether we like to cook. After a long day at chemo with my mom, I rarely felt like cooking when I got home. I will confess – we get Jimmy John’s a lot on those nights. This is one exception to the expensive and time-consuming aspects of “eating out”. But not sure I can consider it low cal. 😁

I guess fewer people hate to cook but more seem to have become ambivalent. I interpret that to mean it’s easier these days to say, “I’ll cook when I have to but I’d rather not.” There are just so many options anymore!!

Most attribute the lack of desire for cooking to time – not having it. I understand that; it’s tough when both of you have worked all day to feel like firing up the oven or stove and prepping a meal. Although some might say it’s a good way to decompress after a rough day. Chop all your aggression away!!

Cooking has definitely become more enjoyable for me for two reasons. First, I have more time since I’m retired. Sure, some days I’m still busy and don’t feel like cooking, and even look forward to a night out. But most days I find it easier to stay home in my comfy clothes, make dinner and plop in front of the TV with my cross stitch before 7:00. Aren’t I exciting???

Second, I am now cooking for someone besides myself. When I was single, and working long hours as well, I’d make something on Sunday night and eat leftovers most of the week. I rarely ate out unless it was a special night with friends. I still enjoyed cooking, but it often wasn’t worth the effort for one person.

With Tim, I strive for more variety. I often still have leftovers, but those become my lunches now. He’s great at making suggestions and for finding new recipes. In fact, he picked out two new recipes for this week’s dinners. I love trying something new and finding a new favorite!! Surprisingly, we’ve had very few bad meals.

Is it likely to change?

It’s hard to say whether things will change. A lot of people are tired of what processed food is doing to our bodies and trying for a more whole foods approach. Anymore, however, it’s not always easy to find “regular” foods that don’t contain some preservative or . So what do you do?

Packaged meals seem to be more popular, yet as this article points out, the business model may not be sustainable. There are 150 companies ing meal kits today, so it’s pretty easy to say some will not make it.

Grocery stores are starting to provide their own meal kits and it’s probably too early to know how well they’re doing. Even if they do well initially, are meal kits simply a novelty that will soon wear off?

For me, it’s just as easy to buy the ingredients I want and make my own meal. I can see why it’s nice for some, as they may not have a stocked fridge or pantry, and can’t justify buying something for one use. They like to cook but don’t like grocery shopping and/or wasting food.

I will admit, I have ingredients in my fridge that I may never use again and will end up tossing them when I finally realize that!! That’s the byproduct of trying a lot of new recipes.

There’s a lot of interest in food channels but have you noticed a lot of the shows aren’t about teaching you how to cook anymore? The focus is more on competitions and while you can still learn something from them, it’s not the same as watching someone make a recipe you’d like to try.

And depending on who you watch, you might not find a recipe you even like. We are basic food people, so I’m picky about which recipes I try. I actually find most of my new recipes on Pinterest. It’s a great source. And I have cookbooks that I love to use.

I guess I’d have to say that cooking is somewhat alive and well. I know that’s a pretty wishy washy conclusion, but considering what we do and what others I know do, I think there’s still an awful lot of cooking going on. Maybe we’re just afraid to admit it. 😏

And for those of you cooking seven nights a week? I want to know your secret!!

3 thoughts on “Is Cooking Alive and Well?”