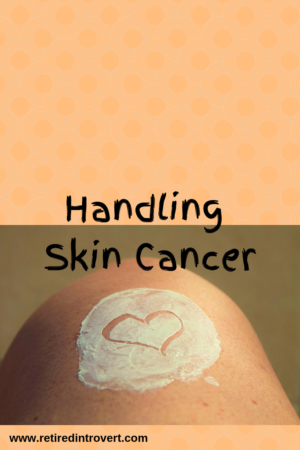 We all know the dangers of skin cancer. We may not realize that what we did years ago is affecting us now. Am I now paying for my teenage years when laying in the sun all summer was the thing to do? Or has 20+ years of going to Florida every winter (and Hawaii several times) made a difference?

We didn’t use “sunscreen” when I was a teenager; we used “suntan” lotion. See, our goal was not to screen it out but to let it darken our skin as much as possible. Remember those days?

My first experience with skin cancer

When I was 40 years old, my primary doctor diagnosed me with rosacea. It’s simply a skin condition where your face gets red and will even break out at times. For me, it was mostly the redness. It surfaced when I was hot or nervous, or even while drinking alcohol.

Anyway, she suggested I see a dermatologist about the rosacea, so I did. He examined me, left the room, came back in and promptly told me I had skin cancer on my face. Wow. No lead in, just the “good” news. We barely talked about the rosacea!!

He did apologize later for his abruptness but during the 20 years I saw him, he never had much of a bedside manner.

Here I was, just a few weeks away from a trip to Hawaii and I’m having skin cancer removed from an area around my nose. Since it was on my face, he used a procedure called Mohs surgery, which involves removing the bad tissue, looking at it under a microscope to see if there are any unclean edges and then taking more until he gets a clean piece. This type of procedure is especially good for the face, where you want to avoid big scars.

It took a while to heal, but today, you wouldn’t notice it if I didn’t show to you. But I had to wear bandages during my Hawaii trip and couldn’t get in the water. Bad timing, huh?

I should mention that my skin cancer was cell, which is the most common and the easiest to treat. It rarely spreads and is easy to remove. For information about the different types, see this Mayo Clinic site.

Once you’ve been diagnosed with skin cancer, the dermatologist recommends an annual visit to provide a full body check to ensure other incidences of cancer don’t surface. Or if they do surface, they can be taken care of earlier vs. later.

I was very disciplined about this and went every year. After 1996, I had two more cases. One was on the side of my leg, just above the knee. The other was on the front of my shoulder. My memory isn’t great with this, but I’m pretty sure this was in or before the early 2000s.

Since these weren’t on my face, my dermatologist removed them with no regard as to how much tissue he was taking. Once he removed the tissue, I had large holes that took a while to heal. To this day, I have visible white circular scars from both of those.

The wound on my leg was especially bad at healing, which resulted in a lumpy scar. He ended up injecting something (I now think it must have been steroids) into the scar periodically and over time, it became smooth. But I still have a large scar.

Because of my vertigo, I hadn’t seen a dermatologist for three years. I wasn’t working anymore so I didn’t want to drive downtown to see him. And while visiting a dermatologist isn’t stressful (at least for me), at that point in my life, everything was stressful and I didn’t see a reason to mess with it.

But over the last year or so, I was noticing some spots on my skin that I knew were basal cell carcinomas. I needed to see a dermatologist.

Did you catch the Madam Secretary episode where she had spots on her face that were noted as places where skin cancer had been removed?  I wondered if Tea Leoni had actually had skin cancer but when I looked it up, they were just using the show to raise awareness. This seemed to be another reminder.

Last fall, I decided I wanted to change dermatologists for three reasons: 1) I wanted something closer to home, 2) I felt no allegiance to this guy, and 3) I wanted to see if a female doctor would be more empathetic to the scarring issue.

I am so glad I took the chance. From the start, I loved my new dermatologist. And the nurses there are also wonderful. I’ve had a different one each time (I’ve been five times now) and they’ve all been cheerful and caring. My doctor said she’s seeing me more than her husband!! (He’s an orthopedic surgeon doing a fellowship in Boston.)

I did have three spots she wanted to check. After biopsies, she confirmed they were basal cell carcinoma and therefore, not dangerous, but they needed to be removed.

I was thrilled to know she wanted to do the Mohs surgery on them, which meant less scarring. Again, I was feeling good about the change in doctors.

She removed the first tissue on February 7 and I had my stitches out on February 15, at which time she took care of the other two spots. The first was on my neck and it looks great. Once it’s fully healed, I don’t expect it to be noticeable.

The second spot was on my shoulder and the third, on my lower leg. Both the neck and shoulder cancers were small. The one on my leg was a little bigger. But with all three, she was able to remove all the cancerous tissue with one cut. That meant they weren’t huge and I didn’t have to spend as much time in her office.

Things have changed since the last time

One big thing has changed since my earlier experiences. The healing process is much simpler, in that I don’t have to do anything with it. I don’t have to apply an antibiotic and I don’t even have to change the bandages between surgery and suture removal. And there’s nothing to do after the sutures are removed.

Last time, I had to spend a lot of time applying ointment and changing bandages and it took a long time to heal. While I’m not allergic to latex, the constant bandage irritated my skin, which was worse than the wound. Evidently, they’ve discovered that less is more when it comes to healing, which is great news for me.

This time, I’ve been encouraged to stay off my feet and not bend or lift anything, which seems a little odd. But it’s supposed to help with bleeding and healing.

I think I tried to do too much after my last surgery, and my leg wound bled all over my sock and jeans. Luckily, the nurse had given me some extra bandages.

This time, I took oral antibiotics for five days because my doctor says leg wounds have a tendency to become infected. I don’t need that!!

My last sutures were removed yesterday, just two days before we go to Florida for a week. I will obviously need to be careful and avoid sun exposure, especially to those spots. And I’ll definitely apply sunscreen.

What are the long term impacts?

My new dermatologist says she needs to see me every six months for two years now. This seems to be the new standard once skin cancer is detected. Or maybe that’s what I did before and I simply don’t remember. So, I’ll see her again towards the end of May.

Will I change how much time I spend in the sun? You may chastise me, but probably not. It’s not like the old days; I won’t be spending hours baking in the sun. Those days are long gone.

But I do like to be outside and I usually get a nice, not dark, tan from my spring and summer walks. I’m out there between 8:00 and 9:00 AM so I’m not getting the strong rays. And I’ll make sure I’m wearing sunscreen whenever I’m out. I feel so much better getting my Vitamin D from the sun!!

I’m thankful that my skin cancers have not been serious. I know others are not as lucky. We all need to be smart about what we’re doing and recognize the damage the sun can do. And educate our children so they do the right things to avoid problems later in life.

If you haven’t had a dermatology checkup, I highly recommend that you do. I’ve become familiar with what basal cell carcinoma looks like but you may not have any idea.

A checkup is painless (but possibly embarrassing if you go to my friend Mary’s dermatologist 😲). If he/she gives you a clean report, you can breathe easy. If there is something, catching it early is the way to go.