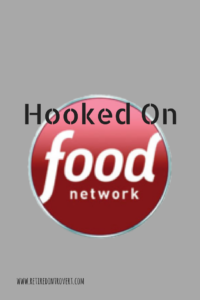 I became hooked on Food Network in the early 2000s. I loved watching the cooking shows on the weekends and learning new techniques and trying new recipes. But the shows have changed over the years. It’s more about entertainment now than about actually learning how to cook. I still watch, just with different expectations.

I started watching on the weekends.  Saturday mornings were full of “how to cook” shows.  I would wake up early (6:30) and turn on the TV while I was still in bed and watch whatever was on.  My favorite was “Everyday Italian” starring Giada de Laurentiis.  I liked her approach and learned a few tricks, like how to peel garlic and properly dice an onion.  I tried several of her recipes, one of which I’ll share towards the end of the year because it’s for a yummy dessert that’s great around the holidays.  It’s one of my all-time favorites.

I also watched Ina Garten in “Barefoot Contessa” and was fascinated by Alton Brown in “Good Eats”.   I watched a little Rachael Ray, but not a lot.  Her big show then was “30 Minute Meals”.  Great concept and the things she made were things I would like.  But I never tried any of her recipes.  I can’t remember why.

As I checked the evening lineup, I started watching “Iron Chef America”.  I was amazed at what these chefs could do without knowing the secret ingredient ahead of time.  It was incredible.  (Do you think they really don’t know ahead of time?)  When “The Next Iron Chef” show started, I was hooked again.  I started watching other nighttime shows, which weren’t about how to cook but more about cooking competitions.

Over time, I started watching less on Saturdays, either because I was starting to see the same shows over and over or because they introduced new hosts that I didn’t like as much.  And then Saturday and Sunday afternoons became full of reruns of the weeknight shows.

I did get hooked on “Food Network Star”.  I liked “Chopped” and “Dinner: Impossible”.  I would actually record some of these shows to watch on the weekends when nothing else was on.  Sometimes I’d have Food Network on simply for background noise while I did other things around the house.

I’m not a big TV watcher, but more of a TV listener, especially at night when I like to knit or do needlework while the TV is on.  (It depends on what’s on.  If it’s “House of Cards”, I have to watch closely.  There’s so much going on in that show, it’s easy to miss something important if I don’t pay attention!!)

What I’m hooked on today

Over time, I’ve lost interest in Giada.  I got tired of her lowcut tops, where it seemed the emphasis was less on the food and more on her physical appeal.  (I suppose that’s why some people watch?)  I also felt that she used the same ingredients all the time and some of her recipes were not my taste.

I don’t know if this is true, but I’ve read Giada doesn’t eat the food she makes.  She samples and then spits it out off camera.  You know they say, never trust a skinny chef.  Well, she’s abnormally thin, if you ask me.  And even though this probably shouldn’t matter, I liked her less after she dumped her husband, who seemed like a nice normal guy.

Now I mainly watch Pioneer Woman for recipes.  (Tim even got me one of her cookbooks for Valentine’s Day.)  And remember that she inspired me to finally try a mandoline?   I’ll sometimes catch Valorie Bertinelli or Trisha Yearwood before Pioneer Woman starts, and their shows are OK.  But I’ve never tried any of their recipes.

I like Pioneer Woman because her recipes are for “regular” food, with normal ingredients (mostly).  The only thing I have to watch is quantity.  She’s cooking for six, while I’m cooking for two!!  But then leftovers are always nice for lunch.

I do like a few of the competitive shows.  I still watch “Chopped” at times.  And I like “Worst Cooks in America”, although it’s getting a little overly dramatic.  Even though Anne Burrell can seem kind of nasty and full of herself, I did learn the correct way to hold a knife from watching her!!  (No one’s going to mark my finger with a red pen!!  🙂 )

I also like “Kids Baking Championship”.  Can you believe what these kids can do?  Do they work from recipes?  I’ve always wondered how they can pull together these various baked items if they don’t have a recipe!!   I typically tape these shows and try to fit them in throughout the week.  However, sometimes I can even get Tim to watch with me at night!!

I read an article that said people are switching from Food Network to shows like “Top Chef”.  I do like that show; so does Tim.  It’s easy to get hooked on it.  You watch one show and you HAVE to catch the next one, and then the next one, etc.  I guess that’s what they count on.  I can only take so much Gordon Ramsey but fortunately, there’s more to the show than him.

If you want more information about cooking (not from Food Network, however) check these out.  I guarantee you’ll learn something useful.  🙂

Every day cooking myths we need to stop believing  (I’m guilty of putting milk in my scrambled eggs.)

Restaurant workers reveal their personal food hacks and tips (I recently started cooking bacon in the oven.  They’re right – it’s not as messy and the bacon comes out perfect.)

Do you watch Food Network shows?  What are you hooked on?

How about HGTV?  Stay tuned – I’ll talk about what I watch there sometime soon!!!

5 thoughts on “Hooked on Food Network”