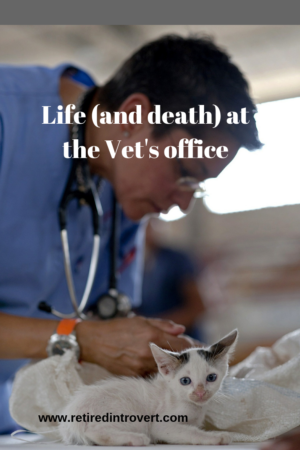 This wasn’t my planned post, but I feel the need for blog therapy today so this is what you’re getting (instead of a pumpkin bread recipe).

We spent two and a half hours yesterday at the vet’s office.  We’ve been there several times before but yesterday’s visit was different from the others.  There was a lot going on.

Why we were there

We were there because our little Mickey wasn’t feeling well, and hadn’t been for several days.  He had diarrhea (the poor guy) and was even having trouble making it all the way to the litter box.  And unlike him, he was laying around all day in his nighttime bed.

Sometimes he’d come up and lay in my closet next to my red slippers or on the rug in my bathroom.  But even then, he moved slowly.  No longer begging for his treats, we knew something wasn’t right.

I wasn’t able to make an appointment with the vet until 3:30 so I had to spend the day worrying about him.  We got in on time and Tim met us there shortly after.

Not surprising to us, the vet declared him severely dehydrated.  We expected that given and not seeing him drink much the last few days.  (Although I don’t usually see him drink much anyway.)  He’d also lost two pounds since last spring and Mickey can’t afford to lose any weight.

She took an x-ray and ran blood tests.  While we were waiting for results, we went back to the waiting room to make way for another patient.  (This is a small office, with only one exam room.)

The waiting room was practically full.  There were two very active dogs on one side and a very big inactive dog at the other end, which is where we sat.

A little bit of death

I was already feeling a little emotional, fearing bad news about Mickey, when a man, who was clearly the owner of the inactive dog, walked in.  His wife said something like, “this is it”, and he broke down.  He was so shook up he couldn’t even talk.  Well, that’s all it took for me to break down.

He was a big dog and I have no idea how they even got him inside, as he needed lots of help getting up and back to the vet’s room.  It was so sad, knowing they were getting ready to put him down.  And of course, they were overcome with emotion.  Pets become family, and losing one is not easy.

They weren’t in the back very long and the man clearly wanted out of there.  He got very impatient as his wife was trying to pay for everything.  Funny how we act when we’re in pain.

We thought we might be witness to another bad outcome, when a man walked in carrying his dog (a Border Collie).  Her body looked all twisted and out of whack and he just laid her on the floor.  At one point, he even sat on the floor next to her.  He was a quiet man and clearly cared about his dog.

We were happy when they came out together, but we don’t have much hope that this dog will last much longer.

In addition to the two very active dogs (I think they were Bull Terriers), a yellow Lab (Daisy) came in who was full of energy.  Her owner said she’s the only dog she’s ever known who loves coming to the vet’s office.  I think she was there for something related to her ear.

Two people came in to pick up dogs after surgery.  One of the dogs was a German Shepherd, who’d had something done to his lower hind legs and possibly had a small stick removed from his mouth.  The other was a small, fluffy dog (not sure the breed) and I have no idea what kind of surgery she had.

A guy came in to buy dog food (Tim says he’s on his mail route) and another lady and her son stopped by to ask a question.  After a while, they left, correctly assessing the chaos and knowing it wasn’t a good time.

We decided to leave him with the vet last night and let them give him IV fluids.  His blood tests also indicated he was anemic.  Based on past visits, we know he has kidney disease and a heart murmur.  We thought it made sense to see if the fluids helped before making any other decisions.

I cried all the way home.  I hated leaving him although he was mad at us for taking him there.  That made me feel even worse.  Mickey is my little buddy and I only want him to get well.  I could only think the worst.

About 8:00 last night, the vet called Tim to let him know Mickey was on the IV and had even eaten a little canned food (he doesn’t normally like canned food).  She planned to send his x-ray to Ames (ISU vet school) because she wanted to make sure she hadn’t missed something it might tell us.

She’d also said we could have an ultrasound done to see if there was any blockage or tumors.  The x-ray didn’t indicate either.

I felt a little better after her call.  It was good to know she cared enough about Mickey to keep us updated, as well as stay well after the office closed.

It doesn’t seem right around the house with Mickey gone.  This is the first time he’s spent a night away from home.  Brutus isn’t sure what to think and I keep expecting to see Mickey staring at me from the door to my room.  Today is laundry day and he’s usually in there yapping at me to give him a treat.  Never thought I’d miss that.

Tim stopped in to see him a while ago and said he was sitting up.  He wasn’t happy about the IV, but who would be?  They took more blood and results indicate the fluids are making a difference.  So, we’ll stay the course for now.

Tim’s going to stop and see him when he’s done with work and tomorrow is probably the earliest he could come home. But we still may not know what’s going on with him.

The vet says he probably doesn’t hurt; just feels yucky.  Let’s hope the fluids continue to do the job and he’s getting back to normal.  Is that possible or just wishful thinking?

What can we expect with a 14-year-old cat?  I know he won’t be around forever.  But I’m not ready to give up our morning cuddles.  😢