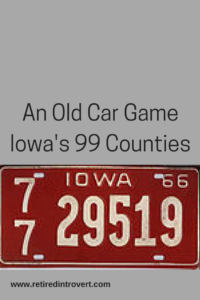 When I was growing up in the 1960s and we traveled any extended distance in the car, it was easy to get bored.

Those were the days when cars had bench seats in the front, no seat belts, no car seats, and even no air conditioning.  The windows were cranked open and the gear shift was on the steering column.  We definitely didn’t have DVD players, cup holders or comfy seats that you find in today’s mini-vans or SUVs.  The 60’s version of an SUV was the family station wagon.  Remember those?  Kind of like the family truckster.  😜 There were Jeeps and other sport utility vehicles but they weren’t meant for family use.  Not until the 1990s and 2000s did the SUVs we know today become popular.  And the first US marketed mini-vans were introduced in 1983.

There were actually some positives about those cars.  You could stuff a lot more people in them, especially if you had a bunch of kids and you wanted to get ice cream with the neighbors on a hot summer night.  (And then wait for your sister to dump hers.)

You could lay down and sleep in the back seat, and even in the front seat if your mom let you rest your head in her lap and your dad let you stretch your legs across his lap.  🙂

Well, this post isn’t about old cars and the changes they’ve gone through over the years.  This is about a game we played while we drove through Iowa.

We need to begin with a little background, so here’s a bit of a history lesson for you.  Source:  Wikipedia

Stick with me and I promise I’ll get to the point.

Iowa first required its residents to register their motor vehicles in 1904 but they had to provide their own license plates until 1911, when the state began to supply plates.  Isn’t that wild?  Can you imagine making your own license plate?

There were all kinds of changes over the years, including colors and even sizes.  In 1929, IA was replaced with IOWA and displayed vertically with the four-digit year on the right side.

They did this switching back and forth throughout the next few years, with no apparent pattern for the changes.  The background and the letter colors also changed each year.

In 1950, IOWA moved back to the top and the year was split into two pieces.  They did not issue new plates in 1951.  This was the first time they used stickers affixed to the plates themselves, much like we do today.

In 1972, stickers began to be used extensively, so new license plates were not issued each year.  In 1975, the license number was changed to include a series of letters specific to each county.  This continues today.

And especially relevant to this post (which you’ll soon see), the county codes were abolished after 57 years and the county names were included at the bottom of the plates starting in 1979.

Designs instead of solid colors were used beginning in 1998 and have been used since.  And in August of 2017, new license plates were designed and starting in April 2018, are gradually being issued.  (I must have just missed getting mine, since I renewed my registration in April and did not receive new plates.)

Can you believe all these changes over the last 114 years?

OK, so what’s my point with all of this?

Remember at the beginning of this post, I talked about the long car rides and getting bored?  Well, my dad made up a game for us.

At that time, my dad was a fieldman for IMT Insurance, which meant he traveled across parts of Iowa visiting county mutual offices.  Because he spent so much time in the car, he amused himself by learning the names of the 99 counties based on the numbers on the license plates he saw.

When we were traveling, our game would be to come up with the county names as cars drove by.  We lived in Hamilton County, which was 40.  We traveled through Story County, which was 85.  My grandparents all lived in Polk County which was 77.  We visited Fort Dodge regularly and it’s in Webster County so 94.

The fact that the numbers were assigned alphabetically by county made it a little easier to guess when we weren’t sure.

It was fun when we’d see a county that wasn’t 40, 77, or 85 since we’d see so many of those.  One of our favorites was Pottawattamie.  If we couldn’t remember what 78 was, my dad would say “your mom”, and we’d all laugh and shout Pottawattamie!!  Maybe you had to be there?  Anyway, we had a fun time with it and it kept us busy during those long (90 minutes was long then) trips.

Ask me today and I can only remember a handful of the county names and numbers.  When they stopped including the numbers and switched to the county names, we were all disappointed because it meant we’d lost something meaningful to us.  Even though my sister and I were all grown up by then, it felt sad to think our game could never be played again.

I bet my dad can still tell you all 99 county names based on their numbers.

When we moved to Ankeny in 1972, the last four digits of our phone number were 4085.  Can you guess how we all remembered that number?

If you’re interested in learning the county numbers and names, and more of the history, check out the Wikipedia source highlighted above.