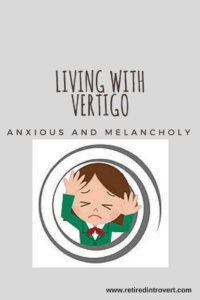 I don’t know why, but this has been one of those weeks for me.  I’m feeling unmotivated and unexcited about everything, as well as anxious.  A lot of what I shared in a previous post is true this week.  I haven’t even felt like walking, some due to the heat early in the week, but mostly because I just can’t make myself get out there.

It could be because the last couple of weeks have been busy, meaning I’ve spent a lot of time outside the house.  That includes a visit to the dentist which possibly has been a vertigo trigger in the past.  Still not sure, but I’m always a little apprehensive.  I’ve gone two times in a row now with no problems, so I’m guessing it was a coincidence the time it did happen.

I do my best to tell myself not to feel anxious but we all know how well that works.  My body seldom listens to my mind.  But a good experience only helps to bolster my confidence next time.

I also had the scamming incident which I know raises my blood pressure.  Nothing happened then but sometimes it seems the episodes happen after the stressful incident.  (By the way, there have been no charges to our accounts.)

And there are other things coming up this week and next.  None of it is anything I should be anxious about.  Well, maybe not the semi-annual visit to the doctor, but even that should not be anxiety-inducing.

I mostly get anxious about the stuff I have to do alone (which means driving) but there are even times when I’m anxious about the things Tim and I are doing.  For instance, the Jackson Browne concert last night.

I think concerts make me anxious because I don’t know how easy we could get out if something happens.  Fortunately, this is at the Civic Center instead of Wells Fargo Arena so that makes it a little less intimidating.  But I’ve been to plenty of concerts since the vertigo episodes began and I’ve always been fine.  Why can’t I stop worrying then?

No issues with this concert either and we had a good time, even if we did get to bed later than normal!!

I thought writing and sharing this might help me this week.  We’ll see.

Why am I anxious?

I wish I knew.  I have had a few of what I call “twinges”, where I feel a spin in my head and my chest gets hot.  But I think I was feeling a little anxious even before then.  It’s hard to know what comes first.  Do I get twinges because I’m anxious or do the twinges make me anxious?  I suppose it could be a little of both.

The first twinge was last Saturday night when I laid down in bed.  It was quick but I felt it.  One of my last bad episodes was in bed so for the last 7 months I’ve been a little nervous every time I crawl in.  Will it happen again?  I try to be so careful with how I roll over and I always start on my left side since that time I started on my right side and it hit right away.  Stupid, isn’t it?  But these are the kinds of things that go through your mind when you’re dealing with this.

Then on Sunday, as we were driving to Bettendorf to see Tim’s daughter and the grandkids, I felt something when we were almost there.  I never get vertigo with these twinges; just this funny feeling in my head and the heat in my chest.  I also tend to be a little unsteady for a while.  Anyway, as a result, I stayed home while they all went to watch Brady give the lineups to the umpires at the start of the River Bandits minor league baseball game.  I hated missing out.

Tuesday, late afternoon, I had a twinge while playing games on my iPad.  Again, no vertigo, but I didn’t feel right in my head.  This one made me tired and I actually laid down on the couch for a while.  We abandoned our dinner plans, i.e., me making it, and Tim made scrambled eggs and toast.  He’s so good to me.  ❤  But I didn’t have much of an appetite.

I suppose I should be happy that none of these resulted in a full blown vertigo episode.  I wonder if the medication is responsible for the lower severity.  Or does this mean I need to see my chiropractor because I’m out of alignment?  Who knows with this stuff.  I’m glad if this is the worst I have to experience but for some reason, it’s not enough.

I do my best to deal with it and try to act normal.  I did go to a friend’s retirement reception on Tuesday, even though I was somewhat dreading it.  Not because I didn’t want to be there, although things like that do make me a little nervous because there will be lots of people and chitchat, and I have to drive to get there.  I’m glad I went.  But I was also very glad when it was time to leave and get home.  Maybe that’s why I had the twinge later that day?

I had lunch plans with someone on Friday and he had to cancel.  I hate to admit I was a little relieved.  Isn’t that sad?  But that could also be the introvert in me.  I think my introversion is magnified when coupled with the anxiety of vertigo.

At this point, I need to try to keep my days as open as I can until I build my confidence up again.  I know I will.  I just have to get through these next few days without incident.  I do believe stress is a trigger for me, although stress for me now can be anything I’m doing.  It’s sure a good thing I’m not working anymore!!

How do you tell yourself not to feel anxious?  Doesn’t that just make it worse?  It’s like telling yourself not to eat chocolate; it makes you want chocolate even more!!  I guess I need to keep myself occupied and try not to think about it.  I wish I was better at that!!

I hate it when the melancholy hits.  It takes the joy out of everything.  I think what brings it on is the realization that I can’t do whatever I want.  I always have to think about what could happen.  Most days I don’t think much about it; other days, it weighs on me.  There are no days when I don’t think “will it happen today?”

I finally ordered a new laptop last week and it came a week earlier than I was told it would.  I know Tim thinks I’m crazy because I’m not all over getting it set up.  I did get the basics going but I’m dreading the transition from my old one to this new one.  It’s almost more than I can handle right now.  And coming earlier than I was expecting has caught me off guard and affected my “plan” for dealing with it.

Having gone through this type of computer transition before, I know I have to pull together a lot of stuff in order to reload applications.  I want everything to be organized and ready before I take it to Little Dog Tech.  (Watch for a future post where I share the steps I followed in making this transition.)

Maybe it’s the weather?  No, can’t be.  I love rainy days.  Could have been the heat?  This week finally got a little cooler so we’ll see if that helps.  In the meantime, I’ll keep plugging away, knowing I’ll get through this yet again.

As always, thanks for listening.

P.S.  Actually, I’m already doing better than when I started writing this early in the week.  I needed some home time and a few changes in plans have made that easier.   I had a nice, long lunch with an old friend today (good thing the other lunch was rescheduled), went to a couple of Target stores to see if I could find a side table for my friend’s daughter in Missouri, and now I’m home for the day.   And I feel just fine.

Oh, I didn’t mention that last night, one of my other physical signs of stress appeared (and usually shows up after the stress is gone).  I have a big cold sore today.  That I can deal with!!!

I plan to get out walking again tomorrow.  🙂

And I promise more upbeat posts next week.  😉

4 thoughts on “Living with Vertigo – Anxious and Melancholy”