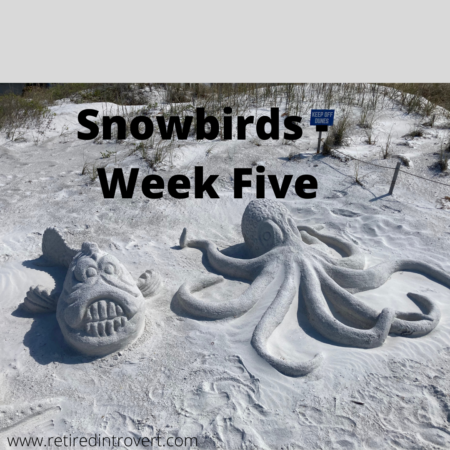 Our time is up. It’s been nice but I think I’m ready to be home. Too bad there’s a three-day drive ahead of us first.

It’s easier to be shut in at home than it is in our Florida condo. Not that it isn’t comfortable. It’s just that there’s more I could do at home. I guess I shouldn’t complain; we’ve only had two days with solid rain. One was this week. Just steady rain, no thunder or lightning (which I would like). If I were home, I could be making cards, sewing, baking. Here I write, knit, and read. Not bad, but I miss the other things.

We’re talking about next year and what to do. I’m guessing we might come later, not just for the higher probability of good weather, but because Tim wants to be here for at least a little bit of spring training. I’m starting to think that’s a good idea, but still have some things to work out at home.

The last four days have felt like vacation. Honestly, there’s no way this could ever feel like real life. There are no appointments, no obligations, no expectations. Sadly, the vacation is over.

I’m curious to see what happens once we get home. Our routine here has become pretty lazy. I mentioned the time zone change and its effects on us. I’m going to bed later and getting up later. Hopefully, that will translate in a positive way when we’re back in the central time zone!!

Finally, some sunshine!! It broke through on Wednesday. The temps started a little cool but the sun helps immensely. Made it back to the pool on Thursday, Friday and Saturday with temps in the 70s. Everyone else must be antsy to get to the pool, too, as it’s been pretty crowded. At least the really loud guy seems to have gone home. But the non-stop talking woman was there today.

I finished three books and started a fourth. Pretty good reading time even without sitting by the pool every day.

Tim worked on another Lego stadium – Lambeau Field, home of the Green Bay Packers. He started it when we got here and finished it last night. He worked on it almost every day.

No trips this week. I was hoping to have more time to spend at the pool and beach and that’s what I did. I had a very nice beach walk on Friday. Actually, Friday was the most perfect day. One of those days that makes me want to stay here forever.

We did make a little visit to a record store Tim had been thinking about going to. I thought he’d given up on it, until he said he’d like to go there after we went to lunch on Wednesday. You can’t believe this place. Well, maybe if you’ve been to an old record store before, you’d believe it. But I was amazed. There was stuff everywhere!! Mostly records, but also CDs, DVDs, posters, t-shirts, electronics. I even found three albums of my own!!

I’m glad I brought my walking sweatshirt as I’ve had to wear it a couple of times, along with long pants. It reminds me of fall in Iowa – the temps, the rainy days. Not unpleasant, just not enough sun and warmth.

Got out again on Wednesday and Thursday which felt good. On Friday, I decided I needed to get to the pool earlier so I could get a good chair. After my pool time, I decided it would be a perfect day for a beach walk. No more walks for the week because I had to maximize my pool time and pack. I stay at the pool for about two hours because I don’t need any more sun than that.

We stumbled across something called Crumbl Cookies. One actually just opened up not far from home and we found out there’s one not far from us here. The cookies are huge and they change the flavors every week, except for the milk chocolate chip. On Saturday, we had peanut butter and chocolate chip. They were very good. This week it’s buckeye brownie, s’mores, and cinnamon with hazelnut spread filling. We split one because they’re thick and big. As Tim says, it’s a good thing we didn’t discover this place early in the trip!!

We ate out more this week, trying to revisit the restaurants we really like, but we also tried a new one. I don’t want us to regret that we didn’t have enough good seafood once we get home. I’ve taken good notes because we still struggle to remember what we did when we were here two years ago. We seem to remember some things differently!!

I thought I’d share the progress on my latest knitting project. I’ve made great progress since I finished my other sweater. This one is less intricate but I do like the pattern. This is the back and not far from being finished.

I actually heard back from the City of Sarasota on Tuesday. They said my case was under review and provided me with a link for checking on its status. I checked on Wednesday, and the case was dismissed!! I owe $0. The thing is, I only waited until Friday before I mailed them a check. Since I only had 14 days, I didn’t want to take any chances. So, we’ll see if they return my check or issue a refund. 🤞

I’m still not feeling quite right and I can’t put my finger on what might be causing it. We’ll see if things change once I’m home. I did start feeling better the last part of the week, though. Maybe it was the sun!! When I feel good, I love being here. When I don’t, I want to be home. I’m pretty sure once we’re home I’ll wish we were still here!!

One more night and then on the road tomorrow. I know Tim’s not looking forward to it, so I need to find a way to make it somewhat fun. Not sure how. And for some reason, he’s not happy about watching the Super Bowl in a hotel room. Makes no difference to me. I think he thinks he’s missing party food!!