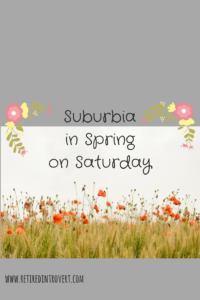 Besides the exercise and vitamin D benefits, my walks often provide me with inspiration.  It can be related to something I’m making or it could end up becoming an idea for a blog post.  This post is the result of one of my recent walks.

Did you know that nationwide 53% of the population lives in suburbs?  And according to this article, suburbanization is on the rise.  Not surprising, suburbs lost ground after 2009’s recession.  We could all see it happening.  New development abruptly slowed down.  But things appear to be picking up again.  It’s all around us now.

I also learned a new term when reading this article – exurb.  Am I the only one unfamiliar with this word?  I had to look it up.

The definition from the Merriam-Webster dictionary is “a region or settlement that lies outside a city and usually beyond its suburbs and that often is inhabited chiefly by well-to-do families”.  I’d say we have a few of those.  😉

I live in a suburb of Des Moines, Iowa so I’m among that 53%.  I’ve lived in suburbs most of my life.  It’s just always seemed like the right thing to do.  I like the neighborhoods and the access to shopping, church, and even my friends.  Several times I’ve lived in new areas, meaning the trees are still small but I’m never too far from areas with lots of shade.  Depends on how far I want to walk, I guess!!

As I began my walk, I stopped to chat with my neighbors who were outside getting ready to take their dog to the dog park.  In the future, I’ll write more about our HOA (homeowners association) and some of the issues we deal with.  On this day, our neighbors mentioned how the lawn service sprayed Roundup too close to their landscaping and several plants were dead.

We were told when we moved here that we would be responsible for adding and maintaining any landscaping we wanted.  The builder was supposed to provide one tree in the front yard, but we didn’t get one.  (For the record, our builder is CSI, and I’d recommend thinking twice before buying from them.  The sales pitch is great, follow-through is not.)  Our association only landscapes the common areas.

However, last fall, I found someone with clippers chopping up several of our bushes.  We commiserated on how silly it is that we were told we can’t expect the landscaping service to distinguish between the common areas and our own areas.

As I was walking, I observed many things that I consider typical of the suburban lifestyle, especially on a Saturday morning.  Everyone’s trying to get so much done on their weekends.  Makes me once again appreciate that I can spread these things out throughout my week.

Many of the things I observed are also typical of spring.  See what you think.

I observed lots of lawn mowing, edging and trimming.  It was a beautiful day so I wasn’t surprised to see so much of this.  At this point, everyone is simply happy to be outside, even if it means mowing and trimming.  Especially after the April we had.  And a cold April wasn’t our imagination.  Iowa had the coldest April in 124 years!!  ❄❄❄

A couple of houses on my street had pots of plants sitting outside ready for planting.  In one case, the plants were laid out to indicate where each would be planted.  In the other, they were all lined up on the front porch.  As my walk took me towards home, I saw the first person planting hers.  And this week, it looked like that homeowner hired a couple of guys to take care of hers. (She had a lot more to plant!)

I saw people cleaning out their garages.  This reminded me of how much we need to clean out ours.   It’s amazing what a winter full of snow does to your garage floor.   I suppose I could do it myself (I always used to) but I think it would be faster and more enjoyable if Tim and I do it together.  We seem to have so many things going on during his days off and that’s the last thing he feels like doing at night.  (But he does have the energy for a run. 😉 )

In another garage, I saw two women decorating for a party.  It seemed too early for a graduation party, so I looked closer as I got nearer to it.  Inside was a great big number 1 balloon.  So, I guess it was for a one-year-old party.  How fun.  I remember those parties for our two grandkids.  I even made some of the pictures I took those days into an 8×10 collage that we have framed downstairs.

We live in a newer area that’s growing rapidly and I often walk on the streets where new houses are being built.  This is something I prefer to do on a Saturday because there are few if any, workers and I don’t worry about getting in someone’s way.  These streets are also good for walking because there’s no traffic.  And it’s easier to snoop!!  (This is where my pace tends to let up a little.)

I like to check out the new houses being built.  In one area, they are just like ours except they have a three car garage instead of two.  (We wish we had three garages, mostly because our two car garage is a tight fit.)  If I can, I try to go inside the new houses.  I like to see how they’ve finished each one.  Unfortunately, at that point, the houses are usually locked and I can’t get in.  But I can still peek through the windows!!

Check out these windows.  They look nice and modern from the outside, but if this house is like ours, this is a bedroom.  I might like these windows for a living room, but definitely not a bedroom.  What a pain to find window coverings!!  (Am I the only one who thinks about those kinds of things when looking at a new house?) 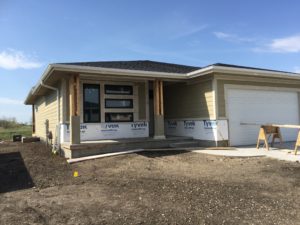 In another new construction area, where they’re building townhomes (two per building), I saw a man drive by and park his car in the cul de sac at the end of the street.  He got out and took a picture of one of the buildings in progress.  Then he went inside it.  I assumed it was going to be his townhome someday and he was monitoring the progress.  I remember doing that, especially with my townhome that was built from scratch.  I was there all the time, as I didn’t want to miss any of the progress.  I took lots of pictures and when I moved out, I made a Shutterfly book so I could remember my days in that house.

We monitored our current house, but it was mostly constructed when we bought it and just needed inside finish work.  Our assumption (you know what happens when you assume, right?) was with a two-month window, there’d be no problem in having it finished.  We were sure wrong.  A couple weeks before our scheduled closing date, nothing had been done to finish the inside.  Our realtor wasn’t believing us when prior to that we mentioned no work was being done.  Finally, they got in gear, but we ended up moving in a week later than planned and I think the quality of a few things suffered.

Other runners and walkers

Of course, there were others out enjoying suburbia in spring on Saturday, just like me.  Some were running, others walking, and some had dogs with them.  Our neighborhood has great sidewalks so there are always lots of people out.  I see a lot of the same people go by every day.

Once I got home, I cooled down by sitting on our deck and writing down my thoughts.  It’s easy when you’re walking to have great ideas and then lose them by the time you get home.  I didn’t want to lose a thing this time.  And I can think of no better place to sit.  Even there, I can observe what’s going on in suburbia in spring on Saturday.

Do you live in suburbia, exurbia or in an urban area?  How did you decide where you wanted to live?

2 thoughts on “Suburbia in Spring on Saturday”