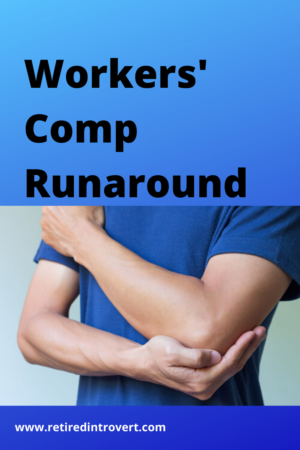 Can anyone tell me why workers’ comp seems to be a dirty word?

Tim injured his arm while at work on November 1. He was sorting his mail and he heard something pop. He’d been at work for about 30 minutes.

He couldn’t drive a car. His injury appeared to be to his elbow area, but it affected his ability to grip anything with his hand. He couldn’t even hold a piece of paper. I had to pick him up and we went straight to urgent care.

In many aspects, the USPS operates on a decentralized basis. They have thousands of workers across the country, so it’s understandable that each office would operate as its own entity.

The Postmaster at each office is responsible for the employees who work there. However, it doesn’t appear they are trained to deal with many HR issues. In this case, it’s not clear if it was a lack of training or if he simply didn’t want to deal with it.

He was also given bad direction from his superior when he did ask for help.

His “advice”, when Tim called him after our urgent care visit, was to handle it with his personal insurance and deal with any workers’ comp issues later. This was very bad advice.

Because we went straight to urgent care, Tim was still wearing his postal uniform. And of course, when they asked how he’d been injured, he told them. There was no question in anyone’s mind that this should be considered workers’ comp. They didn’t hesitate and all paperwork was completed on that basis.

We tried to get the help we needed through their occupational health area, but we were told they did not handle workers’ comp for the USPS. Hmmm. Was this the first bad sign?

So, Tim scheduled a follow up visit with his primary physician, who was able to give him some direction for the next steps. He gave him steroids to take in the short term and he recommended an orthopedic doctor and no work until he’d been seen and diagnosed by one. His office would call the physicians in our area and get an appointment scheduled. This was on November 4.

No word after a couple of days so Tim called back. They had tried three different places and no one would touch it because it was identified as “workers’ comp”. And they wouldn’t change it to his personal insurance, probably knowing they would dispute it and someone wouldn’t get paid. He even offered to pay it himself just so he could see someone!! What a mess.

Finally, one week after his injury and all the waiting, he talked to his boss and said he needed his help to get this resolved. Rightly so, the workers’ comp label on his injury was not going away. So, how does the USPS handle workers’ comp?

Tim called several different national offices to get more information, but has yet to talk to someone. He’s left several voice mail messages.

After one week of being on sick leave, he’d made no progress. His arm was feeling a little better but any overuse would put him right back where he’d been.

Finally, his boss said he should come in and file an injury report. No kidding!! Why wasn’t that done right away? He was there when Tim said he couldn’t work anymore that day. Come to find out, he was told NOT to file an injury report by his boss. Is there some type of punishment if injuries happen on the job?

He set an appointment for the following Tuesday (Monday was a postal holiday). Why couldn’t this have been done that same day? Or even on Saturday?

Tim’s appointment for filing the injury report was delayed until Wednesday. That’s 12 days after his injury. In the meantime, he’s been off work and has made no progress in determining a diagnosis.

It did appear he was finally making progress. He filed the report and was given locations for “approved” doctors. He called his first choice and initially, they were open to seeing him. But they called back later and said they wouldn’t be able to.

We’d also started hearing rumblings that no one likes to deal with the USPS as they are notoriously bad about paying. This shouldn’t surprise me, given the little bit I know about how the USPS is run, but come on. All he wants is to get better so he can go back to work.

Why is this so hard?

Tim’s a good employee. He rarely misses work. He deals with pain almost every single day. It’s a very physical job, especially for someone his age. He does as well as he does because he’s always taken care of his body and is in good shape.

Early on, he was being questioned about whether it really was a work related injury. One of the higher ups even suggested he could have hurt it while sleeping. Yea, right. Having your arm pop while you’re doing your job doesn’t sound like a sleeping injury.

At this point, Tim’s pretty fed up. He truly wants to go back to work as he knows this is their busiest time of the year and he feels bad for his fellow mail carriers. But he also feels like this could have been resolved much sooner if the USPS had dealt with it correctly.

In two days, it will be three weeks since he was injured. His arm is significantly better but any extra effort with that arm could result in more damage. He can tell it’s not completely healed.

We did finally see an orthopedic doctor on Monday. He checked him out and has requested an MRI for further review as he can’t tell much from the x-ray. He wasn’t too complimentary when it came to dealing with the USPS. (I believe “dimwits” is the term he used.) In fact, he’s the only doctor in that clinic that will take workers’ comp cases. Are all companies difficult when it comes to that?

We’re still in a holding pattern. We thought he needed another authorization from the USPS to get the MRI scheduled but he found out yesterday they had what they need. He talked to their office yesterday and was told it could take 7-10 days to get something scheduled.

In the meantime, Tim’s starting to enjoy his time at home. It’s been a bit of an adjustment for me as I’m not used to having him around all the time. I’ve had lots of blogging ideas but little time to sit down and write. Other projects have suffered as well. My treadmill schedule is shot. I’m doing laundry at odd times.

But we’ve gone to two movie matinees and I finally got the outside ready for winter. (I needed a nice day which we finally had yesterday.) We’ve eaten out too much. We’ve made great progress on our (online) Christmas shopping, mostly because Tim is sitting around a lot. He’s also begun decorating our family room for Christmas. (A compromise on my part.)

This experience has taught me we’ll need more planning for Tim’s retirement. There will have to be a few ground rules. 😉

Have any of you had issues with workers’ comp? Is it a problem no matter where you work?

I’ll keep you updated on our progress. 🤞