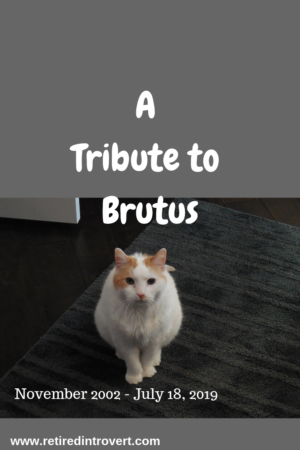 The last thing I expected when I posted this last week was to be writing this post today. We said goodbye to Brutus yesterday, our last furry boy.

It seemed even harder this time, but it was more peaceful than with Mickey. It was harder because Brutus didn’t appear to be suffering. But I think he might have been hurting more than we knew.

How we got here

I mentioned last week that he wasn’t eating well. We took him to the vet on Tuesday and his blood work showed elevated kidney levels, which had never appeared before. She wasn’t too optimistic but we decided to try anti-nausea medication (which is probably why he wasn’t eating) and an appetite stimulant She gave him a shot of the anti-nausea medicine before we left. He ate very well that night, so we were hopeful.

If you recall in last week’s post, I mentioned at his May checkup, Brutus was considered very healthy for a cat his age. So, how could this happen so quickly?

A couple of things. First, it was possibly an effect from the anesthesia he had in June for the tooth removal. Second, it can take a while for kidney failure to manifest itself and by the time it’s discovered, it’s too late. The damage cannot be reversed.

Things took a turn for the worse Wednesday night (he may have been reacting to the anti-nausea pill we gave him) and we rushed him to the pet hospital. They took blood tests and x-rays and found his left kidney was non-functional and his right was barely working. Given that, I’m surprised he wasn’t showing more signs of weakness.

Brutus always was a tough guy.

They kept him overnight at the hospital so they could give him fluids and do an ultrasound to confirm the kidney issues as well as check to see if he had any tumors. It only confirmed what we’d already heard and the doctor indicated it would affect his quality of life.

After what we went through with Mickey, we did not want to see Brutus suffer. Tim and I had talked and we’d already decided what to do. But it was so painful because he didn’t seem that bad. I guess cats are good at hiding how they feel.

I didn’t want to leave Brutus there all day alone, knowing how much he doesn’t like going to the vet, so I’d planned to at least visit him. They had a fabric cone on his head, which he hated of course, and he was very glad to see me. Tim had the great idea of bringing him home for the day, so I did. I am SO glad I did that.

We were able to have one last nice day together. He only left my lap to drink or to go to the litter box. I know he was happier being at home. And I was able to take lots of pictures.

Losing Mickey was hard but losing Brutus was worse. He was losing weight quickly but other than that, he seemed OK. Now we have an empty house and no one for me to talk to during the day.

Brutus was also Tim’s buddy and I know this is even harder for him. We each had our routines with him and it’s tough now that he isn’t here.

Brutus also spent more time with us than Mickey did. He was definitely a lap cat and if possible, was always on one of our laps. He provided endless entertainment and made us laugh all the time. He had to be in the middle of everything.

We’re doing the same with him as we did with Mickey and having his ashes returned to us. They’ll also do an impression of his paw print in clay. We bought an extra box for the ashes when we got Mickey’s so it’s just a matter of picking out a picture for the front.

Mickey’s on our upstairs fireplace mantel. While I’d like them to be together, I think Brutie would prefer the downstairs mantel because it’s where he laid by the fireplace all winter.

I can’t stress enough how glad I am I had yesterday with him. It was all I could do not to hug him constantly. I don’t know how many times I told him I loved him. I know he loved me too.

At the end, he laid on the couch between Tim and me. It’s almost as if he knew what was coming. He was calm and peaceful. The only way I knew he was gone was as his usually warm body began to feel cold.

I’ve only had three pets in my life – one dog and now two cats. All of their deaths were painful. We’ve already made the decision not to get another cat. At least our concerns about going away for the winter are gone.

But right now, I’d rather have Brutus on my lap and be here all winter.

Here’s a pictorial tribute to Brutie. I hope it makes you smile. I know, there are a lot of pictures. He had so much personality and this is the best way for me to tell you about him.

20 thoughts on “A Tribute to Brutus”