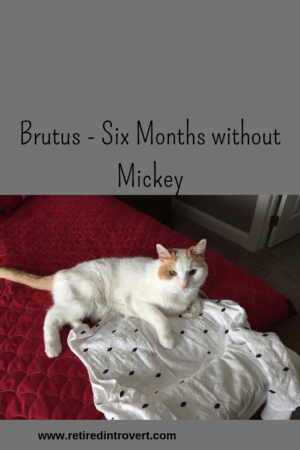 It’s hard to believe it’s been six months since Mickey died. I still think about and miss him every day. But Brutus is still around and he’s done his best to fill the void.

In this post, I mentioned how it seemed Brutus had become needier. That hasn’t changed at all. In fact, he seems to need even more attention. He’s much more likely to rub up against us or nudge me with his head for a scratch.

After our March vacation

We went away for a week in early March. This was his first time without us or Mickey for a whole week. Mary, our trusty catsitter, was here every day but he seemed a little different after that week.

Maybe it was because the furnace went out and he had to spend a couple of days by the space heater? I don’t know how traumatic that would be for a cat.

Maybe he missed us? I think that might be a little true. Tim always tells me “he’s a cat”, meaning he doesn’t need people. I don’t think that’s true, given the fact he never strays too far from us. Even though he sleeps most of the day, he always takes a break and comes to find me. And he still wants that lap time.

Prior to our March vacation, he was eating hard food and had been for years. He ate a little soft food when Mickey was sick, probably because if Mickey got it, he thought he should have it too.

But he didn’t seem to want to eat after we got home. We had some canned food left and tried it. He loved it!! He was eating regularly three meals a day.

He’d even follow Tim upstairs every night at 10:00 while he filled his bowl and then follow him right back down and into his room for the night. We had no issues with eating or going to bed.

We took Brutus into the vet in early May for his annual checkup. We thought we’d find he’d gained back some of the weight he’d lost the year before, given all he was eating. But we were wrong. He had lost more weight.

The vet did several tests to find out why he might be losing the weight, since we told her he was eating well. There was nothing wrong with him. In fact, she told us he was in excellent health for a cat his age (16.5 years).

He did have a bad tooth that needed to come out and while we hate making him endure vet trips, we felt it needed to be done.

Brutus does not do well at the vet. It’s the only time we hear him hiss and growl. They even muzzled him in order to take some blood for tests because he’s a biter. Poor baby.

Not only did he have the bad tooth pulled – she said it was so bad it broke off at the gumline – but she did find a couple of other small ones that needed to come out. So, three teeth out. He wasn’t happy.

Not surprisingly, he didn’t feel much like eating once he got home. In fact, the first full day at home, he didn’t even get out of his nighttime bed, which isn’t like him at all. It scared me a little as it reminded me too much of how Mickey acted when he was sick.

But the next day, he was back to his normal routine. However, he still wasn’t eating much. We tried all kinds of ways to entice him to eat. Since Mickey’s been gone, he never wants treats anymore. So we can’t use that as motivation.

He had his two-week follow-up appointment and we mentioned he wasn’t eating well. This vet thought he may have a slight infection, so she gave him an antibiotic shot and told us to use the rest of the painkiller we had. That seemed to help, at first anyway.

We’re still struggling to get him to eat consistently from day to day. We’ve tried different foods, and at first, he gobbles it up. We think, OK, maybe he’s tired of the other stuff. But then he stops eating the new stuff and wants the old stuff again.

Sometimes, it appears he likes to have us around when he eats. So, I’ll sit on the floor close to his bowl and let him eat. It always seems like he’s eating a lot, but I think he’s just licking it and moving it around because there’s always a bunch in the bowl when he’s done. We’re throwing more food away than he’s eating!!!

Could it be as simple as he’s an old cat? Think about it. As people get older, they tend to eat less. (I guess I’m not old enough yet since I still seem to eat too much!!) Should we worry or assume it’s OK?

We still wonder if it has something to do with his teeth. He tends to favor one side when he chews and he makes a funny sound. A sound we’ve never heard him make before.

I hate to make him go through another vet visit, but he also can’t continue to snub his food. We’ve even tried giving him “people” food, which I suspect is a bad idea. He’ll eat some but even that doesn’t always work. The problem with that is, now he thinks whenever we eat, he should have some too!! What a dilemma!

Brute’s established his routine, mostly around ours. I honestly think he’s a little miffed when we don’t follow it.

We start the morning in my chair with Brutus on my lap. As soon as I turn off my iPad and shut the case, he knows it’s time to get up. (Just like Mickey did, by the way.)

He spends most of the morning in my/our chair. He’ll look up from time to time if I’m making noise or moving around too much. He might get up a little, but not much. Mornings are for sleeping.

He gets up when I come to the kitchen for lunch. Sometimes, I can get him to eat a little, but he typically watches what I’m doing and again, thinks there might be something for him. Then back to the chair.

During dinner, he’s either in the chair or on the sofa. Once we start to clean up, he knows we’ll be going downstairs for the evening soon. He gets up and follows us around until we all settle downstairs.

Tim’s lap is his favorite, but he’ll go back and forth during the evening. This is usually so he can “help” me with whatever I’m working on. Generally, though, over the years he’s learned not to bother my thread or yarn. He just forgets sometimes!!

To sum it up

Brutus is skinnier than he has ever been. I think he sits differently as a result. And he never lays on his back anymore. Is that a trait of a fat cat?

He talks a lot. He always has something to say. He likes it when we come home and he looks sad when we leave.

Sometimes he does things that remind me of Mickey; things he didn’t do before. I always thought Brutus was the “head cat”, but now I wonder if Mickey did more of the leading than I realized.

Brutus has done a great job helping us get used to life without Mickey. He makes me laugh every day. It’s amazing how much I love the guy. I dread the day we lose him too. 😢

And guess what – he just walked into the room. Right on cue!!