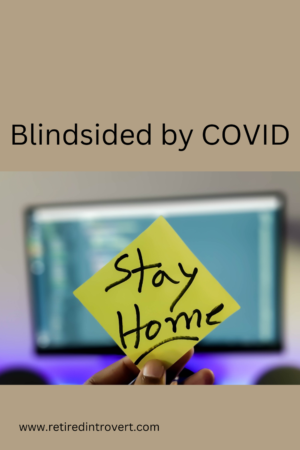 After two and a half years, two vaccines, and three boosters, it finally happened. I got COVID.

I’m not even sure why I decided to test for it. Maybe it was because earlier in the day, I’d noticed the M&Ms I ate didn’t taste quite the same. I assumed my scratchy throat and cough were just “normal”, even though they weren’t getting any better or worse.

Fortunately, my social life hasn’t been affected. I had absolutely nothing scheduled. I think I’d used up all my social energy the week before. But I did have sole Dad responsibility this past week and I failed. It’s likely I exposed him but so far, he’s OK. The only saving grace is Tim is testing negative. So he could visit my dad yesterday and make sure his pillboxes were full for another week.

Other than the throat, cough, and occasional headache, I feel fine. I have noticed I don’t taste things but I assumed it was because I was plugged up. Now I think it’s part of COVID. The first couple of days after testing positive, I did start to get tired in the late afternoon. But I’ve been sleeping fine at night and keeping busy. Keeping busy at home is not a challenge for me and it’s not a punishment. I’ve loved having an excuse to hide in my studio. In fact, I finished making all of our Christmas cards yesterday!!

Since Tim had his shoulder replacement surgery five weeks ago, he’s been sleeping in the guest bedroom, which has turned out to be a lucky thing. Since I took the first test, I’ve been upstairs and he’s been mostly downstairs. We take turns in the kitchen and I don’t let him get too close to me. It seems to be working.

So, how did I manage to get this? I have my suspicions but I hate to speculate. I attended a large gathering the weekend before which could be where I picked it up. But you never know with this, do you?

I thought I was going into winter all prepared. I had the latest COVID booster on September 23, a flu shot on September 29, and the pneumonia vaccine on October 11. Could all of this have affected my immune system? Goes to show nothing is 100% effective, which I already knew but didn’t want to experience.

I’m planning to test again later today. It’s Day 6. My doctor told me to isolate and test again after Day 5. I decided to test on Day 4 so we could make plans for my dad and I was still positive. She also told me to wear a mask from Day 5 to Day 10. But I don’t think I want to go anywhere until I test negative. I have an appointment on Friday that I’m considering pushing to next week.

Even though I’ve enjoyed parts of my forced isolation, I’m ready to get back to normal. I’m used to spending my evenings watching TV with Tim, but I’ve been upstairs by myself. We’ve had to coordinate what we each watch so we stay in sync with the shows we watch together. Baseball has allowed us to miss our regular shows anyway. But I’ve also been able to watch a few things Tim doesn’t watch, like Grace and Frankie.

OK, cross your fingers that I test negative later today. I’m ready to move on!!

26 thoughts on “Blindsided by COVID”